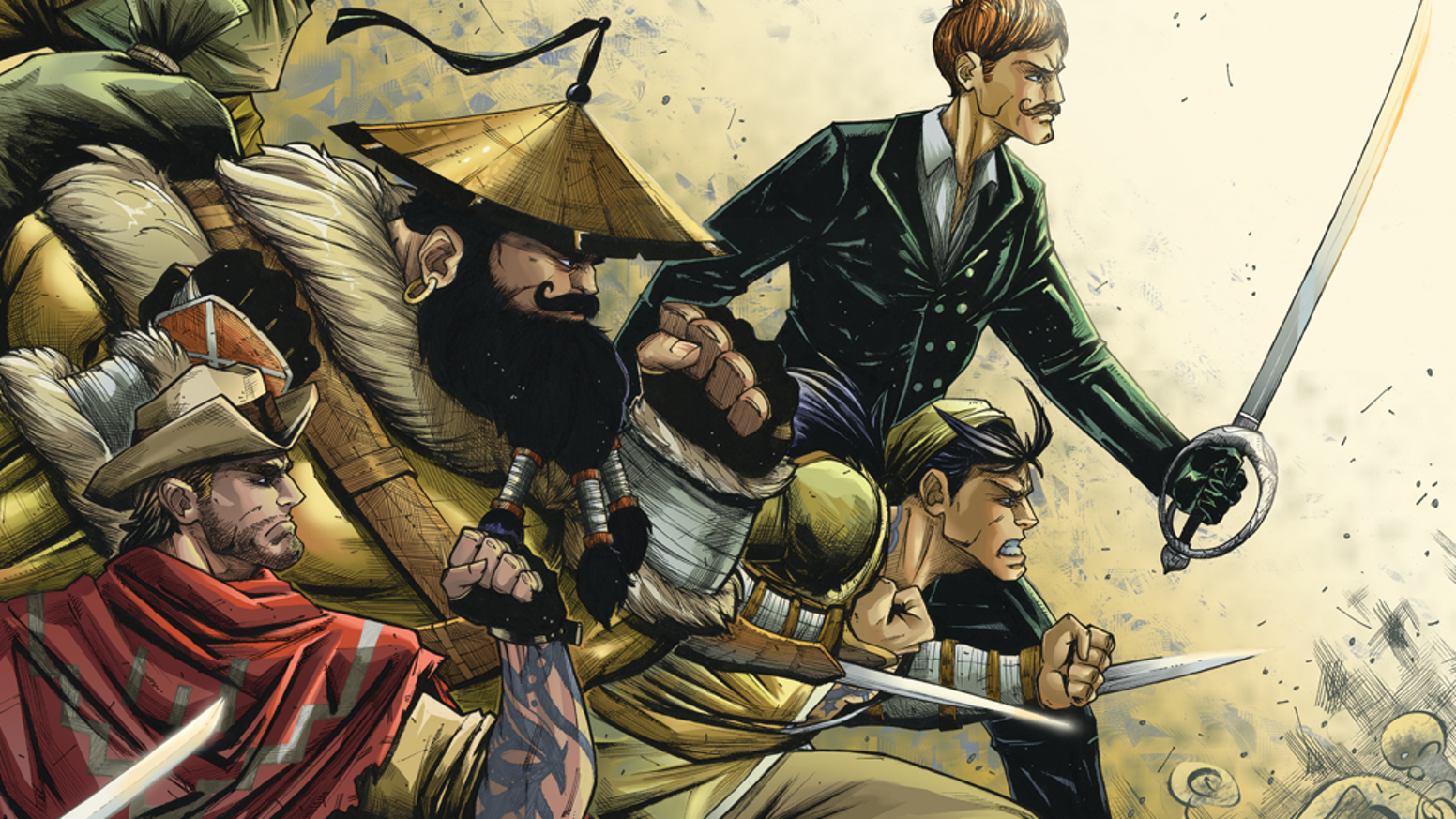 At a bar called “The Call Up” (appropriately so for a location which causes the main characters to come together), an assassin closes in on his target, only to find that he is the target of a second assassin. The second assassin is the target of a third assassin. And so on, until the loop is completed on six dangerous men. All of these fighters, armed with various types of swords, learn that they have been collectively set up for death at each other’s hands.

In describing this independent science fiction title, The Six Swords, we repeatedly turn to motion picture. Partly this is because the artist, Ryan Cody, very effectively uses cinematic techniques such as abrupt cut shots, wide angle action shots,  deep focus and mise-en-scène to capture the often violent action of the plot.

But it is also because so many movies are invoked by this fun and gory adventure:

1. obviously, and with no apology or mask, the title invokes the classic Akira Kurosawa 1954 film Seven Samurai. Like Seven Samurai, the assassins each have their own personalities and motivations. There is an effective, early application of characterisation amongst a bunch of protagonists which otherwise might have blurred.

2. There are shades of the 1986 Russell Mulcahy motion picture Highlander. Each of the Six Swords has a different type of blade, ranging from a giant anime-inspired claymore to a rapier. The mix of attire, weapons, and technology deployed by each of the Six Swords suggests the characters come from different epochs, but is an indicia for future dystopias – no culture has prevailed, and there is no order and structure to the world. This is a common enough indicia in science fiction – see for example the motion pictures Blade Runner, The Fifth Element, and the masterful comic book East of West – but it is backdrop which we think takes thought to roll out.

(On the subject of East of West, there appears to be a common character to both: the archetypal silver tongued devil. The conniving and dangerous Archibald Chamberlain of East of West is remarkably similar to the bluffing and cocky Spider Sanchez. Others might kill or skip out on prostitutes, but this character, of all of them, lacks sufficient honour to be a likely source of betrayal.)

Other reviews have been harsh. We on the other hand thoroughly enjoyed this first issue. It is an engaging, fun adventure, with eye catching swordplay action and the foundation of a great plot by writers Melchor Sapiandante, Matthew Perez, and Chris Massari. The series is currently going through a Kickstarter fund raising campaign.  https://www.kickstarter.com/projects/chrismassari/six-swords-vol-1-a-kung-fu-western-graphic-novel