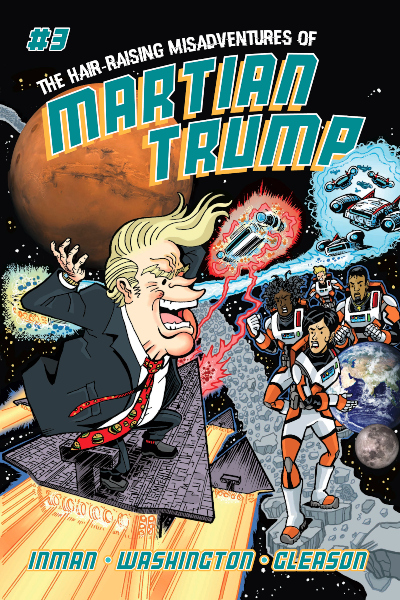 Recently on Twitter, the British television show Quite Interesting noted this indeed quite interesting fact:

The worst sort of clown is the one who does not know his is a clown. The creators of The Hair-Raising Misadventures of Martian Trump , writer T.D Inman and artist Franklin B. Washington have had an easy time of writing this series. News items such as this, https://www.theverge.com/2019/7/19/20701061/president-trump-nasa-administrator-jim-bridenstine-artemis-mars-direct-moon-apollo-11 which describes US President Donald Trump’s befuddlement as to why the United States’ space agency NASA needs to take incremental steps to reach Mars, all provide fuel for a title out to skewer the current commander-in-chief of the United States of America.

Each gag in this parody is in essence a small step beyond some sort of behaviour already indulged in by Mr Trump. It is akin to watching a darts player try to hit a wall of balloons – it is far too easy. The exaggerated cartoonish artistic style of Mr Washington does an excellent job of conveying the sense of ridiculousness.

Some of it is genuinely funny – for example, when Mr Trump, unable to use his phone to rage-Tweet, instead carves out all an -caps personal attack in Mars’ red sands so it can be seen by orbiting satellite. And Mr Inman’s low blow on Matt Damon is bound to cause a chuckle.

But mostly, the comic made your reviewer sad. The last time we read anything so cutting in respect of an American president’s behaviour was Frank Miller’s The Dark Knight Returns, featuring a slightly demented Ronald Reagan. For those of us outside the United States, this comic identifies a low point in American political theatre. We may have griped for decades about the shadow of American hegemony, but now that we have clear evidence that it is dissipating, as the United States starts to make its inherent fractures permanent, we will miss it. It is akin to watching a favourite uncle begin to suffer from dementia.

The title ends with the hyperpatriotic Space Force, with visors styled like the flap of Mr Trump’s hair, riding on jetpacks towards Mars. In the stars above the Red Planet is the word, “VOTE!”. Sound advice. With luck, if polls are accurate (hardly guaranteed given 2016), this comic will become dated in two days’ time.

The first issue of this title is available for free on the website www.martian trump.com .