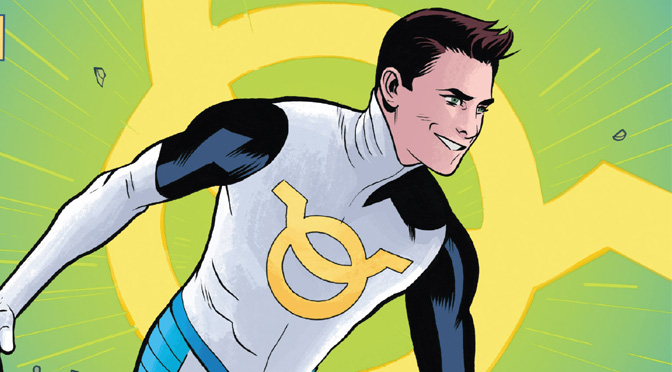 “Captain Kid” is a superhero comic book published by Aftershock Comics, with scribes Mark Waid and Tom Peyer serving as co-creators and co-writers.

Without taking away anything from Mr Peyer, who is a well-known comic book writer, fans of the American genre will immediately know the influential body of work of Mr Waid. More recently Mr Waid has proven adept at creating works that take established mainstream superhero franchises and grounding them in reality, without being spiteful of the suspension of belief inherent to the genre.

“Captain Kid”‘s first issue starts by introducing the protagonist, Chris Vargas, who is celebrating his 45th birthday in an unspecified bar among friends. The occasion is somewhat somber, marred by the realization of his age, coupled with the fact the newspaper he’s working for (ironically titled “Young Guns,” as pointed out by one of the characters) is already struggling for relevance and may soon go out of print.

The impression conveyed by the dialogue is that Chris Vargas is a former superhero – an assumption that is supported a few panels later when he transforms into the eponymous Captain Kid and starts to tail the stranger.

In the next few panels, more details are revealed. It is made apparent that Vargas is similar to DC Comics’ character “Shazam” whose body, upon transformation, is replaced with one that is at its peak physical fitness and possessed of inhuman abilities. Using his powers, he manages to “sense” a “science fiction” machine that the stranger is hiding inside a lawn and garden supply warehouse.

Captain Kid is caught by the stranger, and in a surprisingly welcome approach to a confrontation, Captain Kid is forced to retreat due to the stranger’s threat of calling the police. The protagonist transforms back to his human – and old – self and celebrates the remainder of his birthday with his father.

The next day, Captain Kid tries to tail the stranger again but had to divert his attention to a bridge that is about to collapse, a feat that seems to be beyond his abilities and expertise. But the day is saved by the appearance of the mysterious woman from the previous day, who seems to possess the same powers but better knowledge of how to use them.

Of particular note here is the approach to Captain Kid’s powers, which addresses the fact that super strength, super speed, flight, or any of the usual superhero abilities, require a grasp of basic physics in order to be effective (the protagonist quips that people are going to die because he’s “too stupid”: in context, a cheeky dig by the authors at the genre’s usual laissez faire approach to the physics of super hero abilities.)

The dialogue between the two provide both a background and a launchpad for plot development in a number of ways. First, the stranger is only part of an even bigger threat that will require the combined efforts of super heroes like them, of which it is implied that there are many. Second, it would seem that time displacement will be a plot point as the mysterious woman talks of 1986 in the future tense.

As expected of any first issue, “Captain Kid” #1 is a set up for an overarching plot and a brief introduction of several key players. But it is in of itself a satisfying standalone story serving as an effective plot springboard. Messrs Waid and Peyer are in top form in this title, with another super hero deconstruction that is lighthearted but contains both thought and wit.