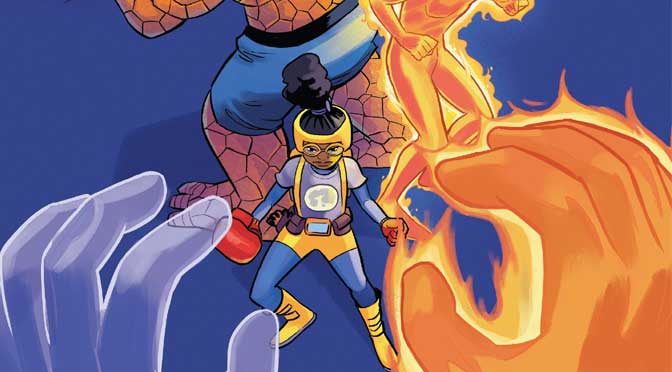 At World Comic Book Review, we try to critique first issues or the beginnings of new story arcs whenever possible, but occasionally we find ourselves considering an issue which has been pulled out of an ongoing story. Marvel Comics’ decision to include short introductory blurbs in the first page of their individual, monthly issues is a wise move. When done right, this summation is a springboard for new readers – in this case, your reviewer – to jump in on any issue and be up-to-date on the ongoing story. The comic Moon Girl and Devil Dinosaur, written by Brandon Montclare, is one of those titles that greatly benefit from the introductory blurbs. The concept behind the characters may otherwise leave new readers scratching their heads and wondering if this is instead a strange new issue of the superhero comic book title, The Fantastic Four. This is because the issue features three Fantastic Four villains, two former members of the Fantastic Four, and a former robot affiliated with the Fantastic Four.

Moon Girl is the alter ego of 9-year-old African-American girl Lunella Lafayette, who is one of the smartest people in the world. She is the partner of a red, time-displaced dinosaur named Devil Dinosaur.

The first page blurb in this particular issue does a good job of explaining why the Dinosaur is nowhere to be found in the issue, as well as providing context as to the chaotic jumble of plots and mysteries littered throughout this issue. Use of the words “chaotic jumble” is not a criticism. Moon Girl and Devil Dinosaur, being partly comedic, is one of the few mainstream titles presently on the market where this kind of storytelling approach works.

The story drops readers in on Moon Girl bailing the former Fantastic Four member Ben “The Thing” Grimm out of jail. The Thing is a superhero with a long track record of saving the world, usually in the company of his fellow superheroes from the Fantastic Four team (The Fantastic Four title has been discontinued after decades of publishing for legal reasons, an issue we will explore another time, and so some of the members of the team are presently at a loose end within Marvel Comics’ shared continuity.) . But here, notwithstanding his track record of do-goodery, The Thing was arrested by the police due to a string of robberies being committed by someone using the powers of the Fantastic Four (and we are probably looking too deep into this thing, but we are wondering what degree of probable cause gave the authorities the right to detain The Thing, just because of the flimsy connection to the use of certain types of superpowers.)

The scene between Moon Girl and The Thing showcases how refreshing Moon Girl is as a character. Mr Montclare’s treatment of Moon Girl admirably contrasts the character’s role as one of the most intelligent characters in the Marvel Universe, while demonstrating nonetheless that she is still a 9 year old girl. Moon Girl is clever, gifted with an analytical mind, but she does not possess the social patience or tact that an adult ordinarily acquires through maturity.

After bailing out The Thing, the comic then segues into Moon Girl’s lab. Here we find another former member of the Fantastic Four, The Human Torch, trying to deal with a robot called HERBIE. This robot used to be owned by the Fantastic Four but has since been modified and reactivated by Moon Girl. The scenes in the lab provide some of the funniest moments in the issue. This includes the recommissioned head of a robot called a Doom Bot. Doom Bots are robotic replicas of the Fantastic Four’s arch-nemesis and global villain, Dr Doom. This Doom Bot retains the megalomania and complete lack of self awareness of the villain Doctor Doom, to comedic effect.

The main plotline for this issue is that The Thing and the Human Torch want to revive the team, and seek to recruit Moon Girl as a member of a new Fantastic Four. The main problem here is twofold. First, amusingly, Moon Girl considers these veteran superheroes as too inept to be her teammates. Second, there is the practical problem of arithmetic: there are only three of them, which means they cannot be The Fantastic “Four”.

The comic continues with the trio’s first important mission, which is to save a cat from a tree. This is followed by a scene that involves a cosmic being named Galactus (another long-standing adversary of the Fantastic Four). Then, we get to the cliffhanger: the identity of the person behind the robberies has been revealed as the Super-Skrull, who is an extraterrestrial villain that has all the powers of the Fantastic Four. One has to wonder why the police, who are all too eager to put The Thing behind bars, did not think of the Super Skrull first. Most Fantastic Four fans would.

All in all, Moon Girl and Devil Dinosaur #27 is a great recommendation for readers who are looking for a title that has humor, without resorting to the now-cliched fourth-wall breaking gags that dominate Marvel’s premiere comedy title, Deadpool. Moon Girl and Devil Dinosaur finds a healthy balance, as it manages to infuse comedy into its story without turning the title, the characters, and, more broadly, the superhero genre into an embarrassing read.