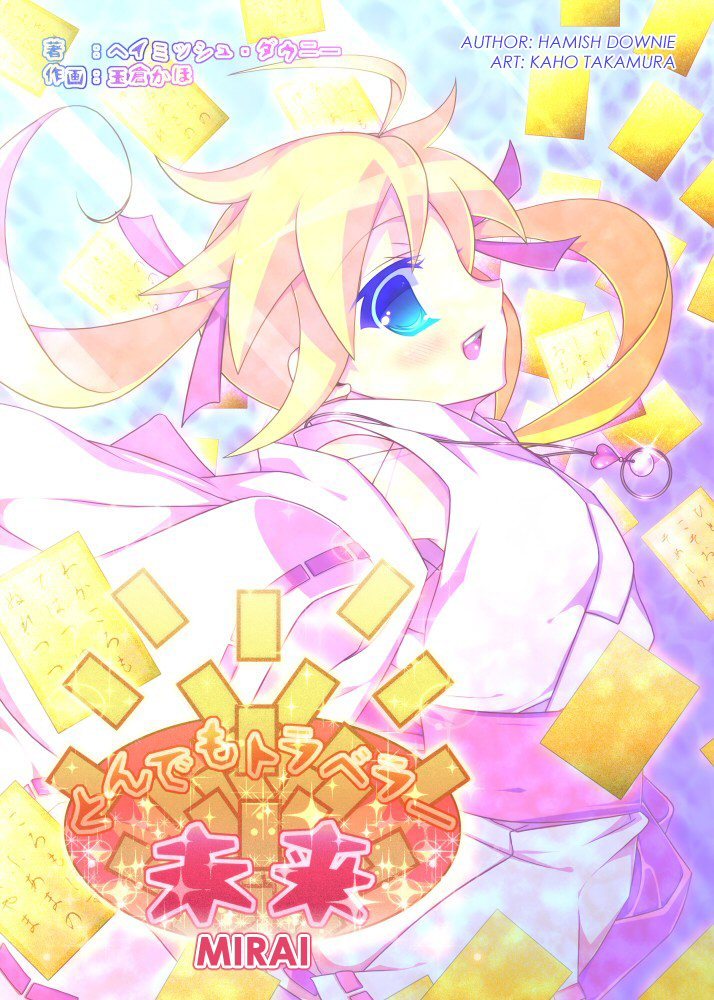 This review is the third of our critiques of independent publishers, following upon Free Comicbook Day. This time, we look at a bishoojo manga out of Osaka in Japan, but, curiously, written by an Australian filmmaker.

The writer of “Mirai: Worst Birthday Ever” is Hamish Downie. Mr Downie is an Australian from Melbourne living in Osaka in Japan. This is his first foray into manga. “Mirai: Worst Birthday Ever” exhibits a unique mix resulting from that creative pedigree: some of the oddest things about Japan mixed with some of the oddest things about Australia, all set in a weird, wonderful, bright/dark future.

This title is set in the future, at some date after 2053. It opens with the farcical, startling and funny concept of an aircraft, flying amidst the clouds, and which is described as constructed of rice crackers, fuelled by sunflower oil and love. This edible prototype plane is being flown around the world, including to dangerous places, by Mirai’s famous scientist parents. And so Mirai is left with the Tanaka family for safekeeping. “What is the point of having a private jet made of rice crackers?” asks one character. “The rain is going to turn it into mulch and then we’ll all die.” The cute bubblegum humour has a gallows tinge.

Mirai, notwithstanding her very Japanese name, is actually from Australia. She repeatedly tries to sneak to her homeland but is always intercepted, mostly, it seems, because of her fame and the fame of her parents. She likes Vegemite – that salty, tar-like Australian spread made of fermented wheat that looks like cat poop and which is inedible to all but Australians- but hates natto- that Japanese fermented pickle that smells like rotten meat and is inedible to all but Japanese. Her sole friend is a cute mouse she rescued from her school’s lab, named Benkai. Her foster parents are happily disinterested in her, in a form of benign neglect. Mr Downie captures the quintessence of being a new expatriate living in Japan. Culture shock is overwhelming. Everything is new, odd, funny, incomprehensible, confronting, subtle, lonely, crowded.

Mirai also misses her grandmother and her cat, Hakun. Both are dead, apparently victims of pollution. Acid rain and smog cause people to wear protective, helmeted “runway Earth suits” – “Over 5 billion sold!” It is at that point that the humour around planes made of crackers entirely evaporates. The future of Mirai is a dystopia with a wrecked atmosphere.

One day a curious, and possibly magical package arrives for the forlorn Mirai. It is very unexpectedly from the Japanese Empress, Izumi, and contains gifts. These gifts include a robot cat, powered by sweets, which looks just like the long dead Hakun (is Mr Downie given us a nudge and a wink by oblique reference to that most famous of cat-type robots from the future, the iconic Japanese children’s character Doraemon?). There is also a magic kimono, and her deceased grandmother’s pearl amulet necklace.

But the robot Hakun and the lab mouse Benkai begin to chase each other. This causes the magic box containing the gifts to explode. Mirai finds herself inexplicably floating in the sea. “What’s happening to me?” she asks, a bishoojo Alice in Wonderland, and then, more existentially, “How can you cry in water?”

Very helpfully, the sound effects of this manga are translated from the katakana. This is a welcome point of access to an important element of manga and which is lost to most Anglophone readers as translated katakana sound effects are not often found in translated manga – almost always only the dialogue is translated into English.

“Mirai: Worst Birthday Ever” has for the past month been in the top 40 by sales on Children’s Manga eBook list for Amazon for the past month. The popularity is understandable. Mr Downie is to be commended for his literary craftsmanship in writing a manga for teenage girls which is equally funny and haunting, without contradiction.

This title can be found on Amazon.

Knight in the Snake Pit #1 (Review)