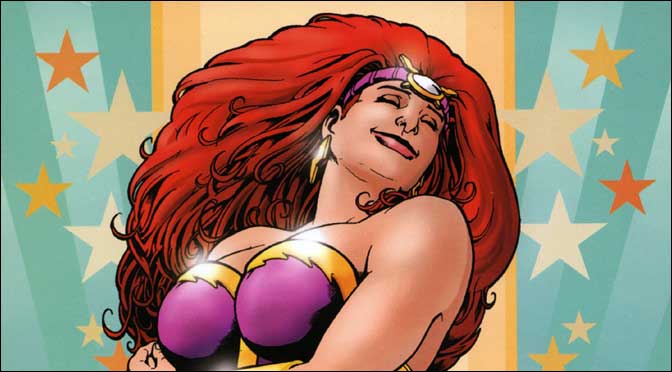 Carlo Vergara’s “Ang Kagila-gilalas na Pakikipagsapalaran ni Zsazsa Zaturnnah” (in English, “Zsazsa Zaturnnah’s Marvelous Adventure”) was originally released as a two-part, independently-published miniseries in 2002, before being picked up later by Philippine book publisher Visual Print Enterprises and re-released as a trade paperback graphic novel to a much wider audience. The comic attracted attention from mainstream media and built a big enough fanbase to warrant a live-action film and theater adaptation.

“Zsazsa Zaturnnah” is a spoof of a classic Filipino superhero named “Darna”. A blatant amalgamation of influences from Fawcett Comics’ Captain Marvel (this character is the subject of litigation for ten years in the 1940s and 1950s over allegations that it was a copy of Superman) and DC’s Wonder Woman, “Darna” is a poverty-stricken, crippled young woman who, upon swallowing a small stone that fell from outer space, turns into an adult superheroine with inhuman strength, speed, powers of flight, and metal cuff bracelets that can deflect bullets or energy projectiles.

“Zsazsa Zaturnnah”’s twist is that instead of a young woman, the superheroine’s alter ego is Ada, an effeminate male homosexual who runs a struggling beauty parlor, and instead of a small stone, she has to swallow a spiky piece of rock roughly the same size as a football. In that sense, curiously, the story is a parody of a copy (Darna) of a copy (Captain Marvel).

Other than the humorous take on the backstory of “Darna”, the plots of the title do not stand out from the usual superhero fare. In the first chapter, Ada chances upon the magical rock by accident, realizes what she must do in order to activate the transformation (painful yet comical, at that) and goes around fighting crime for a few pages. This continues until the climax: the Earth is attacked by a group of fashionable, superpowered female villains from outer space. This inevitably results in a hyper-kinetic and humorous fight.

“Ang Kagila-gilalas na Pakikipagsapalaran ni Zsazsa Zaturnnah” was originally just a creator-owned, independently-published comic in the comedy fantasy genre. Highlighting social issues around homosexuality was most likely not an intentional goal. Accordingly, expectations of anything other than superhero fluff might leave a reader disappointed.

What made the comic attract so much attention and critical acclaim is its take on a gay character. “Zsazsa Zaturnnah”’s gay protagonist has a left a cultural footprint in the Philippines. Around the time “Zsazsa Zaturnnah” was published, the Philippines was generally not progressive in its views of homosexuality. Stories of fathers torturing homosexual sons by dunking their heads in drums of water (in order to punish or force homosexuality away) are common. The tagalog term for homosexuals is used by men as a derogatory term. While there are a lot of effeminate male homosexuals in the entertainment industry, their homosexuality are usually the punchline. Homosexuality was seen as ridiculous, funny, or even shameful.

This is why “Ang Kagila-gilalas na Pakikipagsapalaran ni Zsazsa Zaturnnah”’s somewhat respectful portrayal of Ada was seen as extremely progressive. The character Ada has never hidden her homosexuality. While she exhibits some of the stereotypes (such as dressing in a woman’s clothes, talking in gay parlance, being attracted to men), they are sparingly (if at all) used as the butt of jokes. Ada was also given a romance arc that ended positively. Some would argue that Ada’s male love interest – Dodong – is too one dimensional and served no purpose other than to give the protagonist a romance. But it works as a critique of how other male-centric action stories tend to treat the female love interest, in that these characters are usually not fleshed out beyond the point of making them appealing to the protagonist and to the reader – an object of desire and nothing more substantive than that.

Objectively speaking, “Ang Kagila-gilalas na Pakikipagsapalaran ni Zsazsa Zaturnnah” does not possess the kind of quality in its writing (the excellent artwork does deserve praise, but discussions on it is beyond the expertise of this reviewer) that otherwise should warrant all the critical acclaim and success it received. But it is a timely work of fiction that offered a fresh progressive take on a subject matter that has long been treated unfairly in the medium and in Filipino culture generally. This makes it a milestone in Filipino comic book culture.