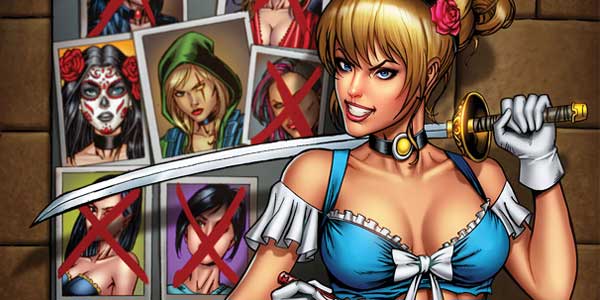 This new title, “Cinderella: Serial Killer Princess” is spun out of “Grimm’s Fairy Tales” and features a decidedly adult version of the classic fairy tale princess clad in skimpy clothing and well-versed in the use of various weapons.

The story starts with Cinderella being revived from what is presumably corporeal death, by a voodoun named Baron Samedi. Baron Samedi is one of the more important loas (spirits) in Haitian Vodou. Baron Samedi serves as the master of the dead within the Vodou pantheon, and is frequently depicted as being particularly fond of debauchery, alcohol, and giving boons to mortal men in exchange for a personal sacrifice (frequently in exchange for the supplicant’s soul.)

In the comic, Baron Samedi – who introduces himself as “Voodoo” – helps Cinderella remember that she died due to a betrayal by a female colleague based on Robin Hood. Voodoo offers Cinderella a chance for revenge, but gives her a series of tasks she must complete first. There is nothing really noteworthy about the tasks – Cinderella must assassinate various characters, mostly her former colleagues, which like her are modern/dark takes on classic fairy tale characters. Sadly, that is all there is to this first issue: Cinderella visiting various characters and killing them in ultra-violent ways.

This title’s problems are manifest. The biggest issue is apparent just from reading our preceding paragraph of this review: the plot rests on a premise that is paper-thin and shallow. On the other hand the series is extremely inaccessible to new readers. The title is deeply immersed in a publisher-wide continuity that is almost as dense as the continuities of major American superhero publishers Marvel and DC. The fact that the story is based on familiar fairy tales does not help, due to the extremely radical departure from well-recognised versions of the traditional characters.

Cinderella is indeed a “serial killer,” but is not an interesting one. The comic depicts the character on a murdering spree. But it fails to convey any sociopathic intelligence or strategic planning on the character’s part. While Cinderella does take precautions and preparations before hunting her marks, these narrative aspects read mostly like placeholders: any danger present is readily countered by a generic magic device prepared or acquired beforehand (including one that is literally referred to as “magic force field” without any apparent hint of irony or embarrassment).

The dialogue is also cringeworthy. Cinderella’s dialogue consists of an endless stream of sarcastic quips and clichéd puns. Further, every other character’s dialogue reads like they serve no other purpose but to set up yet another of Cinderella’s witty put downs or “clever” retorts. It has the subtlety of a teenager on a sugar binge.

A comic about a girl in a stylised bikini is almost always going to be shy on political correctness or gender sensitivity. It relies on an unattainable femme fatale and bloody mayhem. This is the sex and violence of what is sometimes referred to as the “bad girl” genre: the psychotic female killer which has its origins in the 1980s and 1990s between movie characters like Catherine Trammell in “Basic Instinct” (1992) and characters in novels like the razor-wielding Molly in “Neuromancer” (1982). Perhaps the unattainable “bad girl” trope requires separate nomenclature and if so we offer “the Artemis genre”: the female killer who is desirable by reason of her distance.

The softest of pornography: Cinderella has the good sense to avoid crouching while wearing a mini skirt.​

In any event purchasing “Cinderella: Serial Killer Princess” does not make sense for any reader who is not already a fan of Zenescope Entertainment’s other titles. This contemporary, hyper-violent take on a fairy tale character is vapid, a disappointing conclusion given the intrigue of the title’s branding.