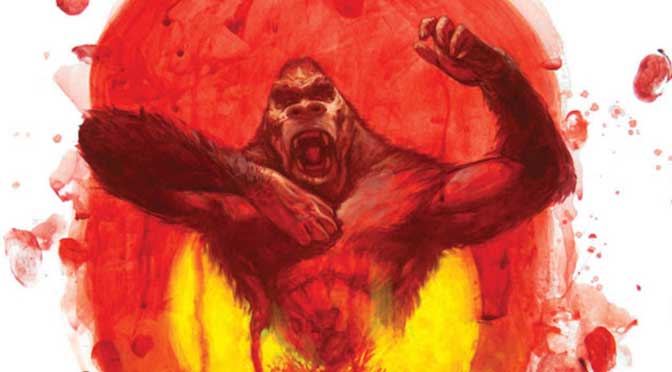 Based on the title alone, it is easy for readers to mistake Kong: Gods of Skull Island for a comic book adaptation of the 2017 American film Kong: Skull Island. That motion picture is in turn a reboot of the King Kong monster film franchise, going back to 1933, which revolves around a gigantic gorilla that serves as the protector of an undiscovered island and its primitive inhabitants. American comic book publisher BOOM! Studios’ Kong: Gods of Skull Island relies on the same formula used in most King Kong stories – a group of explorers from Western civilization arrive on a mysterious island populated by various giant monsters, tribes of primitive people cut off from civilization, and a well-meaning, attractive female, all of which revolve around the titular simian behemoth.

Fortunately for those of us who would find a comic book adaptation of a franchise that has already seen a dozen remakes and reboots redundant, Kong: Gods of Skull Island diverges a little bit from the 2017 film, and in a positive way. Some would consider it a demerit that the comic does not flesh out most of the characters (save for one, which we discuss below). But this allows the story to stand out from all the other treatments of the King Kong franchise. Pages that would normally be devoted to individual character arcs are instead devoted to addressing the exploration and Western colonial imperialism themes that were touched upon lightly by many King Kong stories, but glossed over in favor of bombastic action set pieces.

This is not to say that the comic is boring. Despite the slow burn approach to storytelling, the comic does provide all of the prerequisite giant monster fight scenes and gory deaths at the hands (and teeth) of towering beasts. Readers expecting a thorough insight into the giant gorilla monster’s origins would be disappointed, though. No King Kong story has every provided a definitive explanation for the existence of the monster, and we think that is as it should be. For the purpose of the comic, it is enough to know that a myth concerning a savage, colossal protector of the island is real, and that it is every bit as terrifying as the myths make it out to be. (The Freudian symbolism and Hollywood metaphor – the “deeper symbolic significance of movies about a simian monster climbing phallic skyscrapers in pursuit of sexy yet unavailable actresses… King Kong is not the only moody, rage-prone foreign artiste to have a rocky reception Stateside—but few artists fall as hard as he did, or from such lofty heights.” – as defined by Vanity Fair is thankfully omitted.)

Of particular focus here is the main character, a wealthy humanitarian named James Copland, who accidentally discovered Skull Island and went back with an expeditionary force, aiming to “help” and “civilize” the Tagatu tribe who calls the island home. The story does not place Copland on a pedestal as a misguided Prometheus. Here, it is eventually revealed that Copland’s motivation for wanting to help the Tagatu tribe is self-glorification. Dying from a terminal disease, he wants to be remembered fondly by the tribe – for bringing civilization to them – and the Western world for his amazing discovery. Here the Western colonist myth, of the white man’s gift to the unenlightened savages, manifests. In all of the renditions of the story, Kong, as a protector, has a better moral compass than the arrogant white men.

The Tagatu tribe were not treated as victims either. The tribe is shown to be zealots, and were particularly abusive to a tribe member with a disability. The Tagatus were not submissive to Copland’s crew, and helped the foreign visitors simply because they knew that they can gain some benefit in terms of resources and technology. Copland’s crew were always kept within arm’s length, and as soon as they proved themselves to be too much trouble than they are worth, they are abandoned to Skull Island’s horrors.

The sales pitches describe this comic as a standalone issue, so we assume that there will be no followup to the cliffhanger ending, in which the lone female character is abducted by Kong as the rest of Copland’s crew flee back to their ship. This is actually an effective conclusion, despite being abrupt, demonstrating the moral depravity of the white invaders (there is no heroism in leaving a woman to her fate, probably as a snack for Kong). But it can also work as a much darker prequel to the events of the film adaptations. Either way, the comic serves its purpose and serves its function as yet another, good addition to the kaiju subgenre of fantasy fiction.