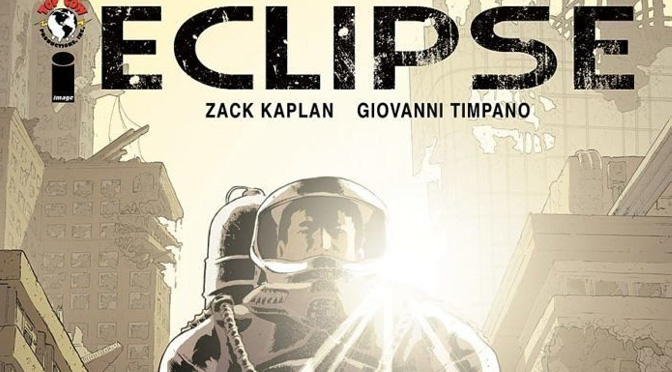 The premise of a catastrophic solar event has roots in reality. In 1859, a massive solar flare called the Carrington Event caused telegraph poles to burst into flames and covered the Earth in beautiful auroras. Should such an enormous radiation pulse occur in the digital age, the consequences would be disastrous.

Writer Zack Kaplan takes this concept further. In this first issue of “Eclipse”, Mr Kaplan paints us a dire picture of the Sun as a scourge of life. Billions died when the Sun inexplicably brightened, burning all living things. Surviving humans are nocturnal. As the sun rises, police officers in New York’s Time Square assist to round up citizens and get them undercover before the morning sun can strike them down. This planet-changing event is called “the Flare” by the community of survivors, an inaccurate term for an ongoing and unrelenting solar radiation particle cloud.

Only a team of maintenance workers known as “icemen” venture out into the lethal sunshine. Wearing thick white suits supported by prodigious nitrogen cooling systems, these men fix broken air conditioner systems and other necessary infrastructure lying above ground. Here we meet David Baxter, also known as “Bax”, the story’s protagonist, an iceman who appears to be his shift’s supervisor.

Bax is called to investigate an apparent murder. A man has been the victim of sunshine, his flesh melted from his bones. Scripture is written in blood next to the corpse: “They were scorched and because they had no root: Matthew 13:6”.

And as the icemen finish their shift, they realise that by reason of their highly specialised equipment that only one of them could have committed the deed, laughing at the absurdity.

The issue could have finished at that point of suspense, but instead Mr Kaplan steps up the pace. Bax is summoned by flippant yet menacing muscle to appear before an industrialist, Brandt. Brandt and Bax have a history, although what that is at this point is not disclosed. Brandt has learned that the dead victim had received a threatening letter before his murder. As it evolves, the industrialist’s daughter, Rose, has also received a letter. The decision is made by Brandt to use the daughter as bait to catch the murderer. Bax is plainly disturbed but cooperates.

Rose is at a “day club” – this future world’s equivalent of a night club. Bax and a detail of policemen stake out the club. The crowd is forced out of the building through a sabotage of rooftop water tanks. The daughter and her friends are peeled away from the crowd and seek refuge in an alley. The villain appears, driving a truck – an improbable thing as oil is no longer a commodity given the impracticalities of a petroleum industry on a scorched world. The truck is replete with giant mirrors arrayed at forty-five degrees. Mr Kaplan is very clever in this. The mirrors flood the darkened alley with sunlight, with predictably lethal results. Rose avoids the solar blast and is assisted by Bax, who shoots out the mirrors. And then we see the story’s antagonist, standing in the sun wearing a trench coat and boots. “Why the hell is he not burning?” asks Rose, disbelieving. The man’s face is exposed but masked by sunlight, and the few features we can see in the final panel suggest the disdain of a zealot.

This story is well-executed and jet-propelled. The dialogue is solid and believable. The dystopian backdrop of a sun-bleached skeleton of a world is creative and compelling. Little details – Bax watching a recording of a pre-Flare Super Bowl, because outdoor sports are no longer possible: a poster advertising “Shady Dome”, a retirement village – cement the reality. The ease of translation to a movie is obvious: If any comic published this year is subject to an option to be released as a motion picture, it will be this one.