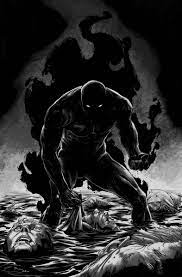 The intersection between superheroes and horror is well-explored. Superheroes, at least at the point of their American genesis in the late 1930s, were crafted as kid-friendly fare. Time quickly passed, and creators endeavoured to differentiate their caped and masked character from other caped and masked characters. To that end, other genres were blended in: Westerns (The Vigilante), science fiction (The Eternals, Adam Strange, Green Lantern), espionage (Nick Fury: Agent of SHIELD, Manhunter), and, early on, the spooky (The Spectre, Dr Fate, Ghost Rider, The Demon, Morbius, Dr Strange).

Here is the promotional blurb from the creators of a new indie horror comic, Night:

From the dark pages of America’s history rises Night, the flagship title from Anywhere But Here Komics.  Nightrise takes place in the fictional town of Jubilee, Alabama.  In 1936, the local mayor has a stranglehold on power with ambitions for politics on a national stage.  With an Alabama senate seat up for grabs, the mayor employs classicism and mob violence as his primary tools to suppress the rising rebellion of the town’s poor.  The only thing in his way– the unexpected hero of his own making.

Developed as a fictional story based on contemporary accounts of the Jim Crow South, Night is the brainchild of Deian Akande and Julian Clay who came up with the idea in 2015 while watching the run-up to the 2016 presidential election.

Night Issue Zero serves as a sneak preview into the larger Night epic and is available for free, digitally via www.nightrises.com.  The free, limited print version of Night Issue Zero: Nightrise will be available for select audiences and contributors to the upcoming 2021 Kickstarter campaign.  This unique issue will be printed as a limited-run and will never be printed again once supplies run out.

NIGHT, a singularly American epic: the story of the black struggle for freedom in the South and the efforts of the elite and powerful to contain the rising opposition to their rule. When the African American and poor white communities of Jubilee, Alabama find that the power to change their fortunes lies in their unity, the current Mayor, Leroy Westfield, deploys every psychological, economic, and violent tool at his disposal to stem the tide. But he does not count on the new specter, the monster of his own making; the revenger of the innocent. He doesn’t count on NIGHT.

“Spectre” is an important word in the context of this story. We asked a question of the creative team:

The story kind of reminded me of old Spectre stories from Adventure Comics (1974-75) where the Spectre was actually almost outside the story. The character was the instrument of poetic justice and as such nothing more. I remember one story where a bad guy is chopped up a gigantic pair of scissors. There’s no character development in any of those stories – no one is going to make lasting changes to the character. Instead of an overarching plot, instead we are given a series of vignettes.

Which leads me to the question: It’s only an issue “zero”, but what wasn’t obvious from the story was, where to from here? There are only so many murderous racists to be eviscerated.

Indeed, there are only so many murderous racists that a superhero can eradicate lol. Issue Zero is a preview. As such, Issue Zero actually reflects issue 12 of our 16-issue arc. Our hope with this first outing is to make readers curious enough about the events that lead to Issue Zero and what comes after to help us fund the Kickstarter for the main arc.

Our story, more than race, is about a particular time in American history where those in power used tools of misinformation, violence and racism as potent weapons to separate constituencies, preventing them from uniting and posing a real threat to the lucrative status quo. That’s what we plan to explore via the 16-issue arc, the effort to unite along socioeconomic lines rather than racial ones thus becoming a powerful vehicle for change.

Not long after this review website was first established, in early 2016 we looked at J.G. Jones’ and Mark Waid’s Strange Fruit https://www.worldcomicbookreview.com/2016/01/05/aliens-in-mississippi-and-cultural-ownership/ . Strange Fruit featured an alien much like Superman who landed in his rocket in Southern Mississippi rather than into the arms of the Kents in the wholesome American mid-west. This title asked the question as to how a superhuman being might cope with inherent, systemic racism. Night provides an alternative answer to that in Strange Fruit. The main character of Night, Emmet, is a black man who resides in the fictional town of Jubilee, Alabama. After being lynched by a racist mob, he is resurrected by his Obeah, a voudou sorceress.

Emmet is vengeful and brutally bloody. Whispers of the lynched haunt him, urge him on, and empower him with supernatural attributes which Emmet deploys with imagination. Emmet is no uncomprehending alien from another planet. He understands systemic racist culture all too well.

As we noted in our exchange with Mr Akande, there is only so much gore to take before the shock value wears thin. This is notwithstanding the quite remarkable art from João Bosco. Mr Bosco’s art is stylish, moody, gritty, horrific in its depiction of blood and body parts. It is the work of an artist plainly skilled in his craft. Still, as Mr Akande notes, this is only issue zero: a platform into a longer tale, and we very much look forward to seeing how the plot of Night evolves.

Night #0 is available for free from http://www.nightrises.com.