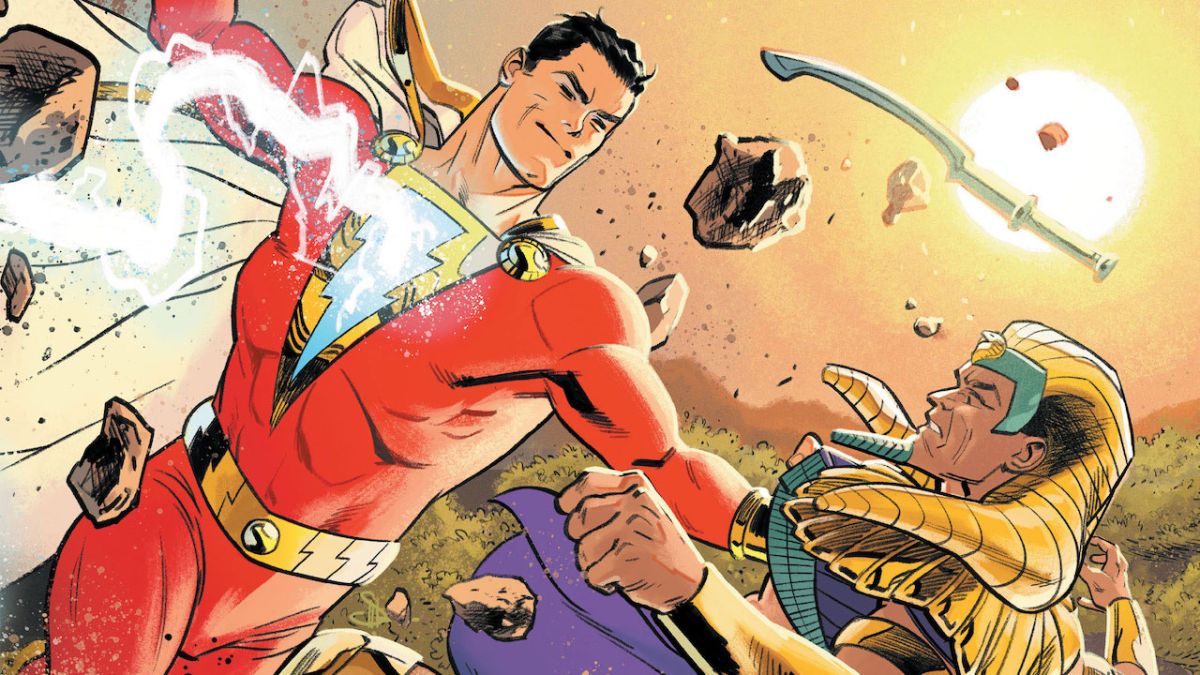 Shazam!: Lightning Strikes is a new comic book miniseries that revolves around the eponymous magical superhero, Shazam. The franchise has a long, messy history involving trademark disputes, but the character itself is kid-friendly and uncomplicated: an orphaned boy named Billy Batson transforms into a magical superhero when he utters the words “Shazam!” It’s meant to cater to young readers, and the success of the PG-rated 2019 live action adaptation shows that the approach still works.

It’s this same young reader-friendly approach that one should expect from Shazam!: Lightning Strikes. The first issue focuses more on Billy Batson and his classmates on a field trip to a museum, and less on a punchable villain or world-ending threat. The first issue’s story does have a powerful enemy for Shazam to fight, but it is peripheral to Billy and his erstwhile sidekick Freddy’s conflict with the school bully, Julian.

The stereotypes present in the story may seem grating to adult readers. It’s something that we’ve seen numerous times in various mediums: the disenfranchised protagonist and his nerdy friend, the jock bully, and the teacher that is always conveniently clueless as to what is happening with her charges. And of course, a powerful ancient villain who awakens from his slumber only to wreak havoc on the present.

This is where Lightning Strikes adds a bit of a fresh (though not entirely unique) twist to the formula. The so-called villain is anything but. It’s an Egyptian temple guard named Kaemqed, who is less interested in committing acts of evil than he is at just guarding a temple. Unfortunately for Kaemqed, the artifact his spirit is tied to has been removed from the temple he was supposed to guard and kept in a museum.

Kaemqed’s return is also unplanned. Rather, it’s the result of another twist that veteran superhero comic book writer Dan Jurgens adds to the formula: instead of stoically taking abuse from a bully, Billy Batson chose to summon his alter ego and humiliate Julian. Unfortunately, Shazam’s presence is the convenient catalyst to waking up the dormant Kaemqed.

Readers who come for the flashy superhero fisticuffs won’t be disappointed. Kaemqed seems to be a good match for Shazam, both in theme and in power. They give as good as they get and things get resolved neatly, albeit without anyone really getting hurt in the long term. Of course, people who love the second word of “sequential art” will have nothing to complain about in Lightning Strikes. The art is clean and bright, well-suited to the theme and tone of the story. The fight itself is rendered with the right kind of bombastic flair expected when two magical beings with lightning powers fight, without being too distracting or going overboard.

It is fundamentally different to the last Shazam comic we reviewed, back in 2015: The safe PG-friendly trajectory of the story does not detract from what Mr Jurgens has done with Lightning Strikes. Far be it for us to demand a meaningful moral lesson here, especially from a story that features a protagonist willing to abuse his advantages in order to get back at a bully. But it does offer a resolution that isn’t so bleak. While there is no definitive retribution in store for the protagonists and the bully Julian does get what’s coming for him, his comeuppance is more redemptive than punitive.