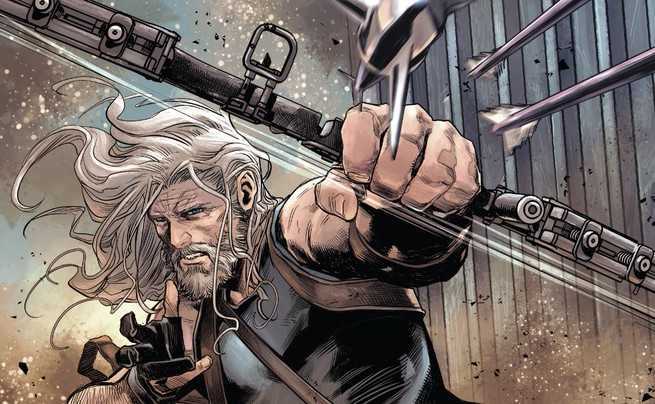 Old Man Hawkeye is a new comic book maxi-series from American publisher Marvel Comics. The story focuses on an alternate future reality version of the archer/superhero, Hawkeye. The comic for its part serves as a spin-off of the very successful Old Man Logan storyline (2012) which we have reviewed before.

The events in Old Man Hawkeye, at least in this first issue, are necessarily set before the Old Man Logan story arc. The character lives (and ultimately dies) in a highly compelling dystopian future. Marvel Comics’ villains have banded together under the leadership of the Nazi villain called the Red Skull, and have succeeded in killing off many of Earth’s most powerful superheroes. The most influential of the villains have divided the United States amongst themselves. It is a bitter, fascinating conclusion to Marvel Comics’ superheroes’ fight against evil. Many of the surviving heroes were left as mere shells of their former selves, morally broken and living in abject poverty, with the exception of those who have sided with the villains or turned into villains themselves. That has happened here: one mutant superhero, Jamie Madrox the Multiple Man, has become a bandit:

As with Old Man Logan, Hawkeye is struggling with old age. Spending the rest of his days working as a smuggler (and trying unsuccessfully to establish a bond with his estranged daughter), Hawkeye decides to get revenge against America’s overlords and mount one last effort to fight back against the villains. This occurs after Hawkeye missed a shot for the first time, and subsequently learns that he is about to go blind as a consequence of suffering glaucoma.

But it cannot be denied that the main appeal of this comic relies on seeing possible (and bleak) futures for many recognizable Marvel characters. It is the same appeal that propelled Old Man Logan to success. Old Man Hawkeye’s value is somewhat marred by the sense that Marvel have reinvented the wheel one too many times. There are countless other alternative reality stories within the comic book medium, and particularly Marvel Comics. Many of these alternate reality future storylines have no bearing on the publisher’s carefully crafted shared continuity. These stories thereby serve only as inconsequential takes on characters, stories that will mostly be discarded once the attention reverts back to the main continuity. On the one hand, breaking with continuity if it allows good writing is not bad thing. On the other hand, the status quo of the franchises is maintained: no plot evolution is effected by these stories, an endemic problem of the superhero genre.

Additionally, being a retracing of the steps taken by the Old Man Logan storyline meant that there is not a lot of surprise on offer by Old Man Hawkeye. Readers already know where the story will ultimately lead, as Old Man Hawkeye’s final fate is made clear in the pages of the original story arc. Old Man Hawkeye is, ultimately, shot in the head. The sense of wonder a reader gets from seeing this alternate reality is already gone, not just because we know the conclusion, because British writer Mark Millar in scripting Old Man Logan already engaged in fulsome world-building. There is not much left to reveal. The villain of the story is another sharpshooter, named Bullseye, who does not seem to have fared too well in the villains’ takeover of the world.

Bullseye is an amoral assassin with no redeeming features at all. But when viewed through the prism of the plot of Old Man Logan, it seems most likely that Hawkeye will prevail against Bullseye, as his last great win before blindness sets in.

Finally, there is also the matter of the lead character. Hawkeye is the subject of in-jokes from within Marvel Comics’ readerbase, for being a mere normal human who is kind of good at hitting things, running around in the company of super soldiers and gods (Marvel Comics themselves have made an effort to sell the character as such). The character simply does not have the market appeal of Wolverine, nor does he have within the story special abilities that could be used to drive home the point of a super human falling so far from grace. Matt Fraction in his highly successful and critically acclaimed run on Hawkeye from 2012 to 2015 redefined the character as filled with anxiety, terribly flawed in relationships, funny, hopeless, constantly covered in bandages, likeable, and very human.

No one else has been able to replicate that charisma. It certainly is not evident here to any significant extent.

In any event, Old Man Hawkeye showcases solid writing and does achieve the introductory issue’s purpose of setting up a larger story, to take place over the next eleven issues of this maxi-series.