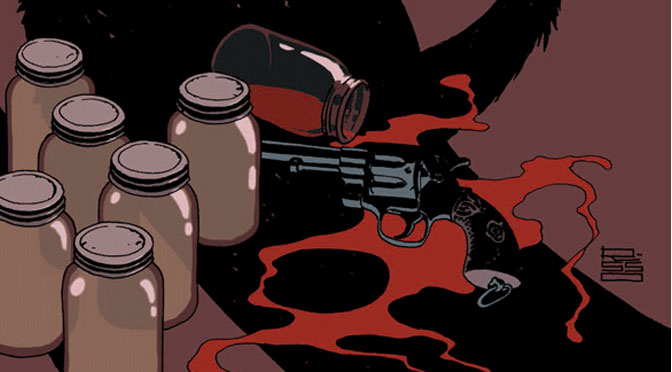 It’s hard to think of a current comic with a pulpier premise than that of “Moonshine” by American publisher Image Comics. The series, in short, tells a Southern tale of hillbilly werewolves and the mafioso gangsters who want them dead.

Luckily, pulp is where creators Brian Azzarello and Eduardo Risso are most at home. The duo began their collaboration with the lauded noir tale “100 Bullets” as part of DC Comics under the Vertigo imprint. After forays into the superhero and science-fiction genres, the duo’s arrival at Image Comics marks their return to crime-driven stories.

The criminals of “Moonshine” operate in the early days of American Prohibition and the rise of organized crime. The series follows protagonist Lou “Handsome” Pirlo, a fast-talking negotiator in the employ of real-life mobster Joe “the Boss” Masseria. In an effort to solidify Masseria’s hold in New York City, Lou is tasked with locating a renowned, reclusive moonshiner and bringing him into the fold.

What should be an easy deal takes Lou deep into the Appalachia of the American South. Here, the reach of the city means little to Hiram Holt, the scarred moonshiner and patriarch of the secluded Holt clan, who refuses Masseria’s offer.

The situation quickly spirals out of Lou’s control as he discovers the claw-marked bodies of several Prohibition Agents. During his attempts to broker a deal between Masseria’s gangsters and the Holt clan before tensions boil over, he quickly learns that Hiram’s desire for seclusion is to protect not only his bootlegging, but the family secret: the power to transform into giant wolves.

While the werewolf angle is emphasized in synopsis and particularly on the striking cover art, the first arc of “Moonshine” places the monsters in the periphery. The series reads less like a werewolf story featuring gangsters than it does as a crime story with supernatural elements.

The distinction is important. When he describes his life of crime in the first issue, Hiram Holt comments “that it’s more ‘bout relations than money.” The same is true for crime stories, particularly gangster ones, which tend to focus instead on relationships that are always a hair-trigger away from exploding.

Though Lou disagrees with Hiram’s stance on the nature of their business, the plot of “Moonshine” is centered on Lou’s system of relationships. He forms truces and vendettas with different members of the Holt family, feeds lies and half-truths to the Boss back home, and tries desperately to ignore visions of his long-dead sister.

To keep his head above water and the rest of him above ground, Lou has only his fast mouth and flask. As the series progresses, the latter poses the most danger to Lou, who quickly begins succumbing to alcohol as the situation grows more desperate.

The stormy center of Lou’s psyche is where the book hits its stride. Mr Azzarello has a gift for the fast-talking swagger the genre requires, but is equally effective in stripping this armor away. As the issues continue, Lou’s long-standing guilt and self-destructive tendencies become more clear and more threatening.

While the werewolf legend relies on the notion of man shedding his civilized form, the protagonist (nicknamed “City” by several of the Holt clan) slowly loses the veneer of polite society he’s gathered around himself. The slow burn thus far culminates in the fifth issue with an ending that, while predictable, meshes with the descent that’s plagued Lou thus far.

More than anything, the twisting of the gangster and horror genres is sold by the art. Twenty years after his U.S debut, Mr Risso continues to grow as a visual storyteller. Notably, “Moonshine” marks the first time the artist has colored his own panels. The muted approach and vibrant blood-reds make striking locations of the sprawling rural woods that constitutes the comic’s setting.

Yet the series shows a great deal of range in this issue’s standout page: a depiction of Lou’s hallucination that adopts a nightmarishly surreal palette. Aside from color, Mr Risso’s character designs remain strong with a steadily growing supporting cast that never feels derivative. Despite the abundance of minor characters waiting in the wings, some in fedoras and others in overalls, their vivid look make the cast easy to track without clunky, identifying dialogue.

Much like the character designs, the series itself is a standout among Image’s already strong present line-up. And like the characters that inhabit its world, Mssrs Azzarello and Risso have played their long con perfectly with its steady build and gradual escalation. With the next issue’s promise to bring it all crashing down, “Moonshine” is a strong series that just keeps getting better.