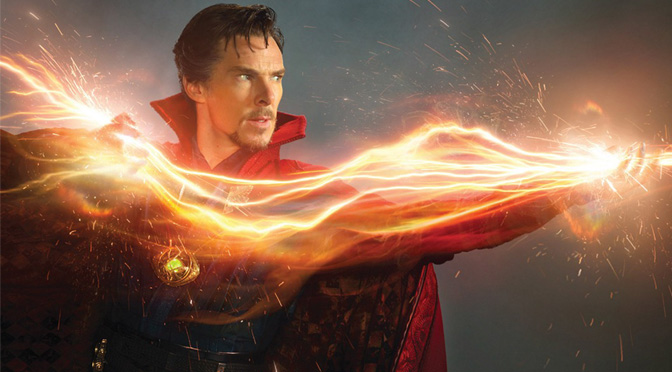 “Dr Strange” is a forthcoming movie starring English actor Benedict Cumberbatch. Mr Cumberbatch is known for his colourful role in the esoteric British television adaption of Sir Arthur Conan Doyle’s books concerning fictional detective Sherlock Holmes. In the motion picture, Mr Cumberbatch plays Dr Stephen Strange, a physician who, following an accident which has ruined his hands, seeks out a Tibetan mystic. The mystic teaches sorcery to Dr Strange. The promotional teasers for the motion picture are striking and exciting.

The title to this particular comic notes that the story within does not sit within the shared continuity between comic book titles published by Disney-subsidiary Marvel Comics. Instead a red seal on the front cover proclaims, “Marvel Cinematic Universe Official Tie-In”. The title this seems intended to attract new readers who might be intrigued by the promotional activity around the forthcoming movie.

The first thing to note is that the character Dr Strange does not appear in this comic, despite a photograph of Mr Cumberbatch striking a heroic pose and wielding unearthly power on the cover.

So, twelve of the twenty pages (60%) of this comic are for people who savour text such as “3OOONN”, “SOOMBRA”, and “3OOONNNN” (as well as the more traditional sound effects, “CLANG”, “CRACK” and “WHAM”).

For readers who prefer cliches to newly minted sound effects, cringeworthy bits of dialogue are scattered liberally in substitution for an indication of any effort at meaningful writing. “YOU CANNOT FATHOM THE POWER WHICH I NOW WIELD!”, “You people clearly don’t know when to give up”, and “It is over” conveys to the reader the same emotional reaction experienced upon discerning a pile of yellowing fast food crumbs trodden heavily into the threads of your lounge room carpet. You wonder who might have possibly left the crumbs on the carpet and so thoughtlessly caused such a mess, and you get angry at the prospect of your carpet turning into a cockroach habitat. Reading this dialogue similarly fills you with disbelief at the manifest laziness of effort, and anger at cluttering your senses and higher functions with the creative equivalent of someone’s nachos remnants.

As holy men, the protagonists of the title, each described as a Master of the Mystic Arts, chant a mantra:

Snootiness towards amateur opponents is clearly a side effect of being a Master of the Mystic Arts. Or the writer, Will Corona Pilgrim, is trying to establish with the finesse of a thumping migraine that the protagonists do, on the other hand, comprehend the mystic arts. Mr Corona Pilgrim repeats it just in case the honorific, “Master of the Mystic Arts” has not made that clear.

This comic gives the reader every indication that it was written during a very noisy and late party in Los Angeles, involving expensive vodka, the sudden realisation of the next day’s submission deadline, a desperate fumbling at the keyboard of an iPhone while sitting on a toilet seat, and a prayer that the editor would be too busy to read the draft story before its dispatch to the artist. Mr Corona Pilgrim should go easy on his lifestyle and pay much, much more attention to his craft. Try harder,
Mr Corona Pilgrim. Or perhaps, just try.

No Magic: Dr Strange and the Sorcerers Supreme #1