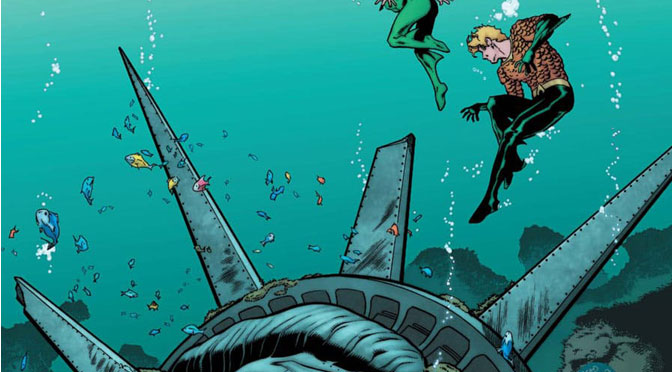 World Comic Book Review is very conscious of any apprehension of bias in our critiques. It has occurred to us, visiting various comic book message boards, that we very frequently criticise the creative output of DC Comics more than we criticise any other American publisher. One comment on a message board suggests that the titles published by DC Comics which we have reviewed over the past year – titles featuring Superman, Batman, the Justice League and Green Lantern – are not representative of DC Comics’ usual and high calibre of creative output.

With that in mind, we decided to navigate into strange waters. This review is concerned with “Aquaman” #12. This title does not feature one of DC Comics’ iconic characters but instead a minor one which has over the years been the subject of satire. It is after all easy to mock a superhero concept which has two notable superpowers: first, the ability to breath under water, and second, the dubious ability to command sea life. 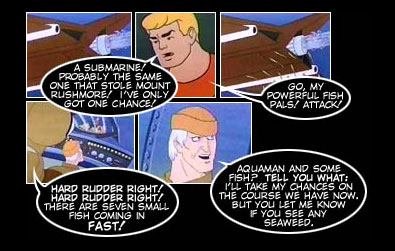 Aquaman is the king of Atlantis but has always been a touch soft. Over the years, DC Comics has endeavoured to make the character relevant and more appealing to readers in various ways. The most notorious of these was to render the character abrasive and gruff. Aquaman was transformed from a gold-sequinned blonde man who talked to fish, into a bare-chested anti-hero with a bionic harpoon built into his wrist and the physical appearance of a shipwrecked mariner. It is fair to say that this fundamental shift received a mixed reception, with advocates against the change accusing DC Comics of creative desperation. 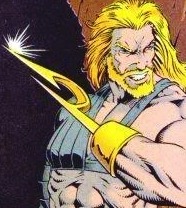 At the turn of the millennium, American comic book publisher Marvel Comics underwent a radical (and eventually aborted) effort to modernise many of its key characters. This was done under a sub brand called the Ultimate titles, and for a little while the term entered the American comic book industry vernacular to describe a radical and contemporary re-imagining of superhero characters. One of those hypotheticals published by Wizard Magazine in 2001 concerned Aquaman, in which the character was redesigned as, essentially, a subsea Roman commander of legions. (Try as we might, we cannot find an image of this on the internet and we would be grateful to any reader who can post this.)

It seems to us that this speculative exercise from fifteen years ago might have influenced this title. Here, Aquaman is king of Atlantis, but is surrounded by a governing bureaucracy. These include:

a. Zeekil Neol, High Lord of the Armies;
b. Carcharodor, Mistress of the Fleet;
c. Jurok Byss, Keeper of the Monsters;
d. Seneschal Kae (a seneschal is a steward);
e. Tula (a character previously known as “Aquagirl”, now in the guise of a faux priestess);
f. Elder Rowa;
g. Mera, Aquaman’s wife and queen of Atlantis.

The plot of this issue involves Aquaman’s arch-enemy, Black Manta, formulating a war between Atlantis and the United States. Aquaman’s denial of aggression oddly is reminiscent of Saddam Hussein’s denial of Iraq’s involvement in 9/11. As Black Manta’s forces, using Atlantean vessels and technologies, brutally attack American cities using hit-and-run tactics, the Atlanteans and the Americans start to fire upon each other’s submarines. There is genuine geopolitical tension in the plot, a strange thing for a superhero comic book.

But the significant development, one that goes to the heart of the Aquaman story mythos, is that Atlantis has been transformed from an empty domed city coveted by super villains into a populated kingdom, with a variety of new, interesting, and, with the benefit of hindsight, absolutely necessary characters. A king is not a soft loner. A king rules people. Here, we finally meet them.