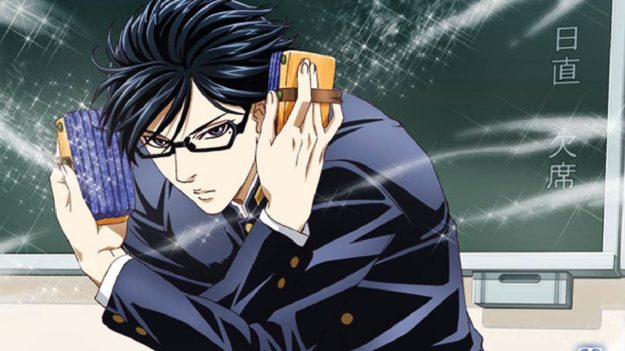 “Sakamoto Desu Ga?” is a four-volume, “slice of life” genre manga from Japanese publisher Enterbrain. The manga ran from 2012 April to December 2015. While it did not achieve the levels of commercial success that shonen franchises otherwise tend to achieve in the West, it was popular enough to warrant an anime adaptation and an English print release a couple of years later via US publisher Seven Seas Entertainment.

Upon reading the manga’s initial chapters, a reader may get the impression that the sole focus of “Sakamoto Desu Ga?” is to satirize some of the more absurd aspects of manga through its protagonist. Known only by his surname, the bespectacled first year high school student Sakamoto is handsome, mysterious, aloof, and effortlessly perfect in everything he does. Sakamoto exhibits athleticism to the point of being super human. He is gifted with extreme intelligence, and enough resourcefulness to solve any problem that comes his way without showing any stress or emotion. The unflappable, “cool” persona in turn makes all the girls in school fall for him, while earning both the resentment and admiration of his male peers.

One important aspect of the Sakamoto character is that he serves as a parody of many manga franchises’ surreal, over-the-top rendering of the most mundane activities. Further to this, Sakamoto has a repertoire of “secret skills” that he employs in order to solve various problems as efficiently and gracefully as possible. This is used to great comedic effect in many story arcs, with Sakamoto coming up with clever, unorthodox solutions to various problems, and the manga introducing these solutions with the same creative flair one would reserve for martial arts moves.

The other important aspect of the character is that he does not have a story of his own. The manga does not introduce any relative, does not delve into his personal life, or even reveal his first name. The stories usually center around his schoolmates and friends, each with their own wants, needs, and problems separate from the protagonist. Sakamoto just ends up passing by, providing help and advice when needed, usually through indirect means.

Despite being a parody of many story formulas in manga, “Sakamoto Desu Ga?” adds texture by subverting said formulas from time to time. A great example of this is an early story arc where Sakamoto comes across a classmate who is being robbed of all of his money by bullies. Where most stories would have the protagonist immediately fight on behalf of the oppressed, Sakamoto just encourages the bullied to get a job at a fastfood restaurant. The reasoning is that this will help the person earn enough money to continue paying off the bullies. The twist is that the hard work instills the victim with pride. Refusing to give up his hard-earned money, the bullied finally stands up to the bullies. It is an out-of-the-box solution.

The manga also manages to tackle the most sensitive of topics in the safest ways possible. One story arc has a classmate’s middle aged mother, Mrs. Kubota, falling in love with with the teenaged Sakamoto, to the point of developing an unhealthy obsession. In the hands of lesser authors, this storyline would have devolved into creepy, awkward territory. But author Nami Sano manages to resolve the plot cleanly while also allowing the Mrs. Kubota character to come to terms with the fact that her feelings for Sakamoto are misplaced.

The ancillary characters in “Sakamoto Desu Ga?” are well-written. Most of them start out as stereotypes and parodies of popular manga archetypes. But as the series unfolds they each get fleshed out into individuals. Of note here are the numerous bullies in school, who first try to victimise Sakamoto but end up becoming his admirers and friends. There is also the series’ villain, Fukase. Fukase is allegedly 35 years of age and possesses an IQ of 180, but has never graduated from high school. Instead, he returns every year to torment and harass his chosen victims until they “disappear.” Before the series ends, Sakamoto deduces why Fukase chooses to flunk every year, using the information to convince him into moving on with his life.

Sakamoto’s fearlessness and his refusal to develop deeper relationships with other people are all a result of knowing that he is likely not going to be around for long. The last chapter has Sakamoto delivering the commencement speech at his school, despite only being in first year, and saying his goodbyes. He explains that he has been chosen by NASA to join a group of people who will migrate to Mars. But Sakamoto himself explained in an early chapter that humans living on Mars is not yet possible.

Some of Sakamoto’s friends recognize the news of Sakamoto’s participation in Mars’ colonisation as a lie, and Sakamoto neither confirms nor denies. The final few pages help encapsulate the series’ uncanny ability to juggle humor and pathos without missing a beat. Sakamoto leaves the school gates for the last time and, finally, registers an emotion, but nobody sees it on a face covered by pie crust.

Most English language reviews of the title note, repeatedly, that the manga won the Grand Prize from anime/manga website “Comic Natalie” in 2013, beating better known title “Attack on Titan”, and that volume 1 was listed first on the “Book of the Year list of Male-Oriented Comics from January to June 2013” by Da Vinci magazine. Both of these Japanese sites are almost unknown outside of Japan, which begs the question: is there any issue with the nuances of Japanese culture? When accepting an invitation to the 2016 Anime Expo 2016 in Los Angeles, the author said in a press release, “In comparison to all the other Japanese manga, anime, and dramas depicting Japanese school life in a fictitious or fancy way, the story of “Haven’t You Heard? I’m Sakamoto” is based on plain suburban school life & unique Japanese habits. So, there might be a lot of unfamiliar cultural references and expressions for U.S. readers. I’m really interested in how readers outside of Japan have accepted this piece.”

But it translates well. We recommend “Sakamoto Desu Ga?” to readers who want something light, funny, and engrossing. The series is short enough for a reader to speed through the entire series in an afternoon, but the more discerning will be rewarded with an even deeper version of the story.