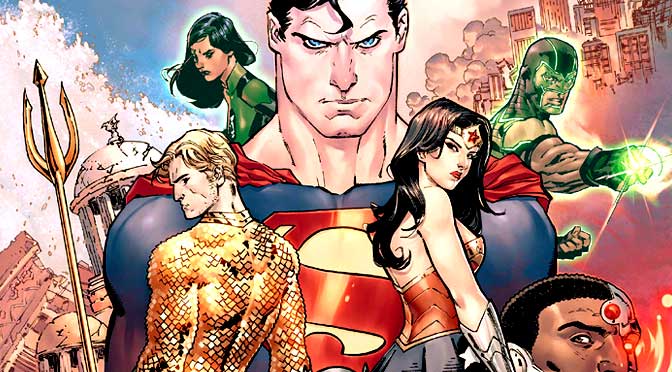 Most people have heard of London’s famous river, the Thames. Another prominent river in London was called the Fleet River (Fleet Street, the home of London’s newspaper industry, is named after the Fleet River). During Roman times, the Fleet River was a significant body of water. But industrialisation killed the river. From the 1680s through to the 1870s, the Fleet River was periodically bricked in, and finally entirely covered over in remarkable cylindrical brick structures which are reminiscent of the London Metro. The purpose of this was that the Fleet River was reduced over the centuries to being a toxic conduit for effluent. The smell and threat of disease was so pronounced that the river needed to be entombed, and it has now entirely disappeared from sight – at least on the surface. Underground, it is possible to tour the river’s catacombs, although this requires donning hazard clothing, goggles and a mask because of the overpowering smell.

Reading “Justice League #1 Rebirth – Directors’ Cut” must be like a stroll by a hypothetical tourist through the contemporary Fleet River. The tourist marvels at the history and legacy of what he beholds. He admires the sheer human ingenuity and creativity that led what is before him. The construction of the infrastructure is wondrous and the visuals impressive. But at the end of the day, he is nonetheless wading through stinking shit.

This image conveys us to a review of this title. Any “Justice League” title carries with it a measure of awe. The characters are firmly established in popular culture, have wonderful backstories, and to see them interact should always be a pleasure. But this comic features pointless disaster scene after pointless disaster scene, in which the superheroes justify their title as the Earth’s saviours by facing off against cataclysmic events. Each of the superheroes comprising the Justice League then find themselves dealing with some sort of (presumably alien) hive intelligence which takes over the minds of people around them, whispering doom and gloom from many mouths. It is dreary and dank.

Because this is a “director’s cut” – a motion picture in the form in which envisaged by the director, before the editorial process of the producers which makes it market ready – DC Comics decided to publish the comic in black and white. Devoid of colours, its remarkably hard to read. Most black and white publications rely on shading so as to give three dimensional verisimilitude, or remove unnecessary lines. This title looks a little like a colouring-in book.

Also because this is a “director’s cut”, the issue consists of the story, the script for the story, and then the pencilled (sans inked) pages of the story. Because the same content is re-delivered and then re-redelivered in the same issue, there is the sense of a prolonged echo, the same effect as yelling down the enclosed tunnels of the Fleet River.

By reason of its legacy and status as a vehicle for DC Comics’ primary character properties, this title should sit amongst DC Comics’ vanguard, being one of its more impressive publications. There is also the assumption that a first issue carries with it the highest degree of quality, which might be expected to wane over time. Instead, this issue is a wandering, stinking muddle.