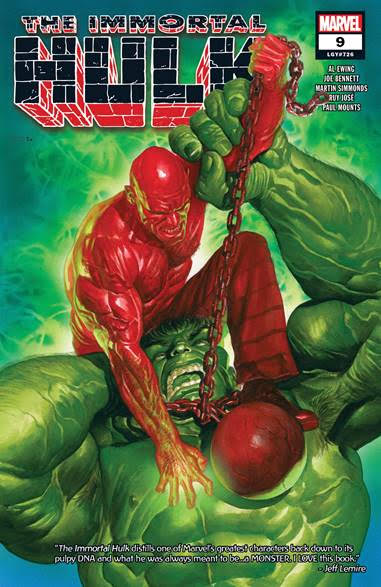 There are two categories of readers that followed Bruce Jones’s stint on The Incredible Hulk #34-76 from 2001-2005:

a.       Committed readers of the Hulk’s adventures. The character was created in 1962 by Stan Lee and Jack Kirby. The Hulk involves a scientist, Dr Bruce Banner, being irradiated with gamma rays, with the side effect that he changes, usually without volition, into a terrifyingly strong, green monster. The character has been the subject of a television series, two stand-along motion pictures, and very regular appearances in Marvel Studio’s Avengers movies. The Hulk has a very loyal and long-standing following of fans;

b.       Devotees of Mr Jones’ writing. Mr Jones brought suspense, horror (the chatty, re-animated cadavers were indeed creepy), and sparing use of the title character. Instead, the story concentrated on Bruce Banner’s efforts to run and hide. Mr Jones took a leaf out of old-style horror writing: as with the motion picture Jaws, the beast is only revealed at the end. For much of Mr Jones’ run on the title, we only see glimpses of the Hulk, or the consequences of the Hulk’s appearance. When the Hulk does appear, he is depicted as an awe-inspiring creature. We know where we are headed, but the Hulk’s presence is striking because it has been slowly built up over many issues.

Writer Al Ewing’s take on the Hulk is much more horror than superhero. The first page does not suggest that at all: we see the armoured superhero Iron Man standing over the defeated supervillain called The Absorbing Man – Carl Creel.

The story mostly follows Creel’s trail into custody, being indifferent to a beating by prison guards, arrogantly dealing with his lawyer, and then being involved in a suspicious government program where he is injected with a toxin that kills gamma-irradiated creatures (a poor glowing green mouse is the test subject – when defenceless animals are mistreated in a story, you know immediately that the perpetrators are unspeakably cruel).

Reluctance and a slow realisation only comes into it for Creel as the needle slides into his arm, and a scientist jokes about Creel’s “God-given talent” with a sense of irony. Creel, his skin rendered a bright red, is then deployed against the Hulk, and Creel’s touch eats away at the Hulk’s muscles, withering him to a drawn husk.

But by the last two pages of the issue, Creel has realised that he has crossed a line and become the tool of a hellish demon:

Demon: “You cannot see what I am. You’re speaking to a mask, Carl Creel. Your body is above us. Your malleable body. Your useful body. But you are here. Below all. You had many chances to turn back – but you always end up here at the end. There’s no changing your fate. You’re a creature of sin, Carl. The oldest sin. The sin of pride. It’s a killer… and it comes before the fall.”

And the very last page reveals the horror that Creel has become. This is definitely not a superhero title.

The Hulk himself is haunted by some sort of ghostly presence, the spectre of something which is wearing Banner’s father’s face. The Hulk returns to the place where he was created: “I know the way from here. This close, there’s a pull.. Los Diablos. Test site for the first Gamma bomb. My place of power. The place where I’m strongest. Welcome home.” For a character which has its foundations in the science of teragenic mutation and radioactivity, there is a strong element of mysticism in the internal monologue. The Hulk is either confronted by the paranormal – his father’s leering face peers up and out at him from a sinister-looking bomb bunker with scarlet-tinted windows –  or is losing his mind. “You put it in our head – the whole idea of. Coming here. Because this is your ground too. Your place of power. This isn’t where I get rid of you. It’s where you get rid of me.”

There is repeated colour symbolism. The Hulk is a sickly toxic green, but the reflection of his father and Creel himself are a strontium red. “Red is a good colour for us,” says one of the scientists when Creel first sees the colour of his transformed skin, and Creel is given the code name “Red Dog”. Creel has found himself in a red hell.

We usually categorise comics we have reviewed in one or more topics. Rather unexpectedly, this title is classed by us as a “horror” story. And a good one it is, too.