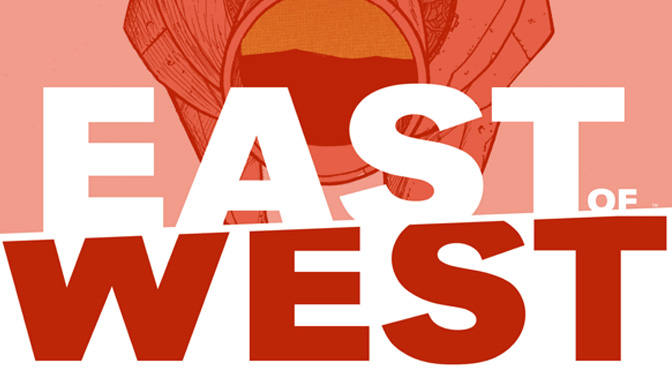 Imagine an alternative reality whereby the continental United States is divided between the Union, the Confederacy, a Texan Republic, a black homeland called The Kingdom, a Native American high technocratic autocracy called The Endless Lands, and a Maoist Chinese state where California would otherwise be. This universe also features the Four Horsemen of the Apocalypse reincarnated as young children. This is except for Death, depicted as a lean cowboy, accompanied by two powerful Native American sorcerers, and who has fathered the beast of the Apocalypse manifest as a young boy.

This is the outlandish backdrop to “East of West”. And yet despite this absurdity, the series is written, by Jonathan Hickman, with utter finesse. The characters and interpersonal relations are riveting, the action epic, the dialogue fine-tuned, and the execution sublime.

After the death of Alexander the Great in 323BC, the Macedonian king’s empire was divided between his generals, called the Diadochi, who after initially enjoying the windfall of kingdoms soon turned against each other. Notwithstanding Mr Hickman’s public comments that the concept started life as a Western, “East of West” has a sense of texture, grand intrigue, of decisions and mistakes being made with historical repercussions, of rulers too proud to make alliances and of alliances corrupted by betrayal, reminiscent of the Diadochi’s deals, wars and strategies, rather than a mere cowboy story. In Mr Hickman’s vision, weaknesses are exploited. Vengeance is absolute. Power is wielded both as a stiletto and as a hammer.

The players are many and are each well-rounded. These are the main characters:

a. Xiaoling, a former prisoner of her father’s regime of the People’s Republic, now it’s implacable absolute ruler;
b. Death, in the shape of a dusty outrider atop a mechanised horse with the head of an inferno;
c. The relentless Texan lawman and sniper known as the Ranger;
d. The President of the Union, Antonia La Vay, a brutal woman who relishes in martial law and will stop at nothing to preserve her position as ruler of her decaying and bankrupt state;
e. The ruthless, slippery, silver-tongued devil, Archibald Chamberlain, the new president of the Confederacy following his quiet assassination of his predecessor and friend;
f. Conquest, the brutal leader of the Horsemen, but reincarnated as a child;
g. Babylon, the naive boy lead by a corrupted artificial intelligence called Balloon (by reason of its shape and appearance). Babylon is the son of Death and Xiaoling;
h. The crown prince of the Kingdom, John Freeman, who competes with his fourteen brothers to secede their father; and
i. Governor Bel Solomon of the Republic of Texas, possessed by a demonic figure called Cheveyo of the Endless Nation.

Somehow, Mr Hickman manages to deploy each of these many characters – and more — with the clockwork rhythm of a chess game. There is nothing hurried about the rollout of each character and plot line and yet somehow each aspect receives an abundance of time.

The sense that this is an end game is pronounced throughout the series and it seems to be gathering pace. Avenging the killing of envoys at a place of armistice, the Endless Lands send a fleet of high technology floating citadels to annihilate the Texan Republic. The leaders of the conquered nation are publicly executed and the surviving citizens oppressed. Having removed one player from the board, the Endless Lands form an uncertain and unequal alliance with the People’s Republic. In this issue, Xioaling is told that the Endless Nation is threatened by invasion, and so she as Premier will soon be committed to leading an army into a final battle. She speaks to Death through an artefact, urging him to press on to find their son before he takes on his role as the catalyst of the Apocalypse.

At the same time, four – soon, three – bounty hunters track Babylon. One of them is particularly disturbing: a deteriorating robot leaking brown rust or stale blood, which appears to have parasited itself onto a man. In between conversations involving the robot and his murderous companions, the man beneath the robot quietly interjects, uncertain as to how he has come to be there, remembering fragments of his life with his family, horrified by what is happening around him, unable to control his own body. The robot is a grating evil. Mr Hickman has other monstrosities abusing the innocent lurking about in his text, and the roll-out of each of them never fails to shock.

Despite the action involving bounty hunters and Xiaoling’s message to Death, the aspect of the plot which starts to gain momentum concerns Babylon. Babylon sees the world literally through the eyes of Balloon: he is seemingly unaware that he is plugged in by way of wired patches over his eye sockets into a virtual world controlled and distorted by Balloon. Balloon is intent on driving Babylon towards his role as the bringer of Armageddon, and through Balloon’s eyes Babylon sees the world as a grim and desperate place overdue for razing.

Yet Babylon might be playing his own game. He second-guesses his own education and programming at the hands of Balloon, to Balloon’s consternation: Babylon has figured out (“reverse engineered”) that he has been groomed and from an early age. Babylon does not slay a wild pig which Balloon has projected through the virtual reality rig as a vile threat, but instead plays with the pig and sits on the pig as he travels. Babylon talks about opening a school after the Apocalypse, which surprises Balloon. To shore up Balloon’s doubts, Babylon openly speculates whether the planet once burning will resemble a star. “One can only hope,” says Balloon. Is Babylon astute enough to have worked out he is being manipulated, and is formulating his own agenda?

On a ridge overlooking Babylon’s and Balloon’s encampment, the bounty hunters have gathered. Not far away is Death. The first time Babylon was depicted in combat, with Conquest, Babylon casually removed Conquest’s leg. The fearsome bounty hunters almost certainly face a gruesome fate. But what happens when Death meets Babylon, through the virtual reality rig, remains to be seen.

This title is surely one of the top two comics in terms of quality being presently published out of the US. We cannot recommend it highly enough.