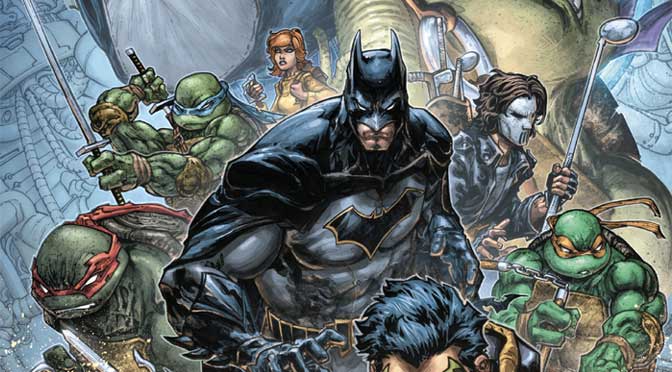 The title of Batman/Teenage Mutant Ninja Turtles II immediately communicates that this is a blatant attempt to leverage two marketable brands in order to attract each property’s respective fanbases. With such endeavours, the goal typically is to boost sales, usually at the cost of innovative storytelling.

DC Comics (and to a lesser degree, the US comic book industry in general) has a poor track record when it comes to producing inter-company character crossovers. Few can be said to be good examples of storytelling (a very notable exception is the hilarious and enormously successful Batman/Judge Dredd: Judgment on Gotham by John Wagner and Alan Grant in 1991).

Further, the two brands participating in this crossover do not complement each other in terms of tone and continuity, which further bodes poorly. On the one hand, the Batman franchise, concerned with a costumed crime-fighter seeking to avenge the death of his parents through a never-ending war on crime, is known for bleak stories that try to hide the more ridiculous aspects of superhero stories behind a veneer of sometimes confronting realism. On the other hand, despite starting out as a hyper-violent satirical take on action comic books, the Teenage Mutant Ninja Turtles, a story about turtles rendered anthropomorphic by way of radioactive ooze and then trained in ninja martial arts, has since been repurposed as a kid-friendly franchise revolving around youth-focused cartoons and toy merchandise. The fact that this is the second Batman and TMNT crossover also does not inspire confidence: whatever novelty the pairing might have has already been used up by the first encounter.

With all of these factors piled up against it, to our surprise, Batman/Teenage Mutant Ninja Turtles II does have a functional and even meaningful story. Part of this success is because it borrows elements from each franchise’s established continuity. The title does require prior knowledge of Batman’s history and the latest iteration of the Teenage Mutant Ninja Turles cartoon from children’s television production company Nickelodeon. But the consequence of this is a meaningful elevation of the narrative.

The story in Batman/Teenage Mutant Ninja Turtles II starts off with two events running in parallel. The four Teenage Mutant Ninja Turtles are trying to intervene in an all-out war between different factions of their enemies, The Foot Clan, which imploded after their leader, called the Shredder, was neutralised by the Ninja Turtles. One part of the Foot Clan is still loyal to the Shredder, while another faction considers the former leader to be weak and in need of a more capable and brutal replacement. A third faction materialises, following the banner of the Shredder’s daughter, Karai, who has an uneasy truce with the Turtles while running a campaign to usurp her father. The Turtles find themselves spread too thin. All three rival factions have only one thing in common: they wish to see the Turtles dead.

The other parallel story happens in a different reality: DC Comics’ superhero continuity. Batman and his son Damian (who is currently serving as Batman’s companion, Robin) are hunting down members of the League of Assassins. The League are long-standing adversaries of Batman within the character’s mythos. The League is described as having become more dangerous due to a change in leadership. Similar to the Ninja Turtles’ predicament, the League’s former commander, an immortal villain named Ra’s Al Ghul, has been removed from leadership and replaced by someone who is more aggressive and less bound by honor. The identity of this new leader gives even the Batman pause. The League’s new master is the villain Bane. Bane is generally considered as an equal to the Batman in terms of intellect and physical capabilities (in the 1993 Knightfall storyline, it was Bane who managed to “retire” the Batman, after breaking Batman’s spine). But Bane is now rendered even more dangerous after bathing in a restorative pool called the Lazarus Pit (a concept heavily based upon the Christian myth of the Fountain of Youth).

The two parallel stories then converge. In the original versions of the Teenage Mutant Ninja Turtles franchise, the differences in fighting ability between the four ninja turtles were not focused upon, as the stories tend to highlight their different talents instead, with one of the Turtles, named Donatello, being portrayed as having exceptional intelligence and engineering skill. The latest iteration of the Turtles retains the distinction between the Turtles with regard to their talents, but it now emphasizes the fact that they are not equal when it comes to martial arts capabilities. Here, Donatello is depicted as an exceptional martial artist, but not on the level of his more combat-happy brothers. Instead, the character relies on gadgetry and strategy to fill in the gap in skill. Within this title it leads to Donatello almost being killed by two aggressive Foot clan ninjas, were it not for the timely arrival of his brothers.

Frustrated at the humiliation, Donatello seeks advice from the Turtles’ mentor, a rat named Splinter. But Donatello ultimately decides that he can learn from the person who possesses intelligence and engineering skill similar to his own, while still being an exceptional fighter: The Batman.

While the story does not explain it, it is implied that the Ninja Turtles and the Batman have met in the past (this is made apparent by the use of the Roman numerals “II” in the title), and that during their first encounter, the Batman left an impression on Donatello. So the Ninja Turtle decides to build a cross-dimensional teleportation device in order to find the Batman and seek his advice. Thus, the main catalyst for the crossover is introduced: in order to evade a group of Foot clan ninjas Donatello uses his teleportation device, but the unplanned use led to him appearing in the place where Batman and Robin are facing down Bane, and, incidentally, accidentally transporting Bane to the Teenage Mutant Ninja Turtles’ reality.

The trajectory for the story is clear. The Ninja Turtles will have to contend with Bane. Batman, with the help of Donatello, will most definitely follow in order to help take down Batman’s nemesis. Along the way, the issue with Donatello’s dwindling confidence and the respective conflicts with the League of Assassins and the Foot Clan will be addressed with the ritualised violence which is the trademark of both the Batman and the Teenage Mutant Ninja Turtles franchises. For a title which is ostensibly lowbrow, there are a lot of pieces on the board, but fortunately the plot is not muddled enough to confuse readers. While the Teenage Mutant Ninja Turtles characters do not gel well with the Batman characters in terms of concept, the underlying story in here is surprisingly thoughtful.