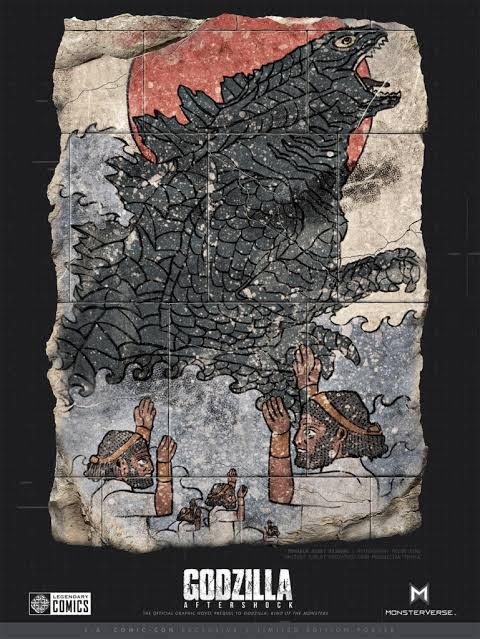 This week Legendary Comics have announced the graphic novel GODZILLA: AFTERSHOCK, written by Arvid Nelson, with art by Drew Edward Johnson. Godzilla is a kaiju – the most famous of all kaiju – and we have written previously of the character’s history.

Rather unsurprisingly, in this new title which is to be released concurrently with a new English-language Godzilla motion picture, the giant radioactive lizard Godzilla finds himself once again threatened as a new foe rises from the depth, “unleashing a series of devasting earthquakes and driven by an unstoppable primal instinct that will test the King of Monsters like never before”. Godzilla: Aftershock will be available online and in stores next year.

The remarkable aspect to us in this promotional piece is the art. It is very clever, in that it very heavily draws upon traditional Japanese woodblock manga. The British Museum in London features the Mitsubishi Corporation Japanese Galleries. These galleries display a variety of Japanese art, including historic manga. Here is a colour woodblock from 1848:

It has the mandatory manga indicia of picture accompanied by text – yet another example of the antiquity of comics.

And another, very famous woodblock print from 1837:

So perhaps the story to the forthcoming Godzilla: Aftershock is old hat – the giant lizard will no doubt battle some new monster – but this promotional art draws upon a deep Japanese tradition of heroes and monsters in manga. We would be very pleased if the story is half as clever as the art.