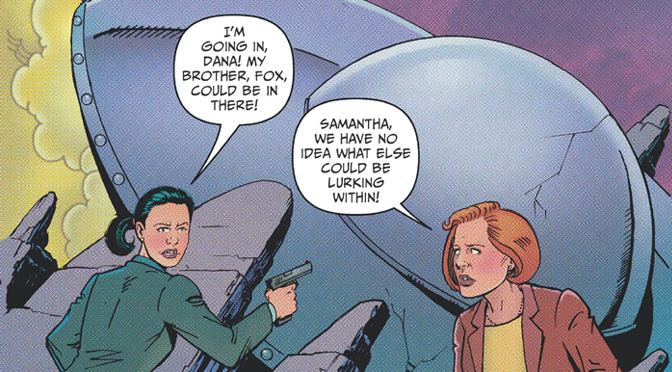 In March 2016, American comic book publisher IDW Publishing launched a publishing campaign dubbed ‘Deviations’. This campaign at essence is a set of standalone stories for IDW Publishing’s titles that play around with the concept of alternate realities, not as a plot point but as an entire concept. The “Deviations” one-shot issues do not explain why the presented reality is different from the established one, if indeed such an explanation is necessary, and instead each issue jumps straight into the parallel universe story. In the “Transformers: Deviations” one-shot, a character that died in mainstream community survived. In the “X-Files: Deviations” issue, the male protagonist of the famous science fiction television series, Fox Mulder, is replaced in the narrative by the character’s sister.

IDW Publishing’s “The X-Files” comic is a licensed offshoot of the American science fiction / horror series that originally aired from 10 September 1993 to 19 May 2002. It spanned nine seasons, two films, and a number of spin-offs in various media (and as of writing, the series has been revived in the form of a six episode tenth season.) The concept has a broad, cultish following, spread across many countries.

The story focuses on two FBI special agents that are assigned to unsolved cases involving the paranormal, called “the X-Files.” The first FBI agent is the medical doctor Dana Scully, who plays the skeptical foil, and the other one is the aforementioned Mulder who believes in extraterrestrials and is driven by the need to solve the mysterious disappearance of his sister when they were young.

This is the part of the original story that “The X-Files: Deviations” plays around with. The comic gives readers a peek at the mysterious disappearance. But instead of the sister, in this story it was Fox Mulder who was abducted by a mysterious light. The roles are thus reversed: it was Fox’s sister Samantha who grew up obsessed with solving the case, and it was she who rose through the ranks of the FBI before being reassigned to the X-Files and partnered with Agent Scully.

The gender swapping makes for an interesting premise, and the entire issue is a serviceable plot springboard. Unfortunately, this is a one shot and not the start of a longer narrative. The story spends time on Scully’s and Samantha’s introduction to each other, before a couple of panels of exposition on what the X-files are. Then, the duo return to the old Mulder residence, quite inexplicably. There is a red herring in the form of a random chauvinist passing by to make crude sexual remarks on two female strangers, and then we get the stalker himself, supervised by one of the series’ recurring characters, the enigmatic and ruthless Cigarette Smoking Man. The final panel shows the identity of the stalker to be Fox Mulder himself. It goes no further than that.

The story is both lost and lean. It could have but did not delve into how Mulder’s career would have been different as a woman going against the grain in a field that is predominantly male, a premise that could have been easily addressed in the first few pages when various FBI agents were pointing Scully towards her new partner’s office. Perhaps the writer, Amy Chu, swept through this to preserve the mystery of who the new partner was, but in this case we wonder whether the big reveal was worth it or indeed much of a surprise (a genuine surprise would have been the Smoking Man as Samantha Mulder’s new partner).

Taking out the clever novelty of Mulder’s identity being swapped for his sister, readers are left with nothing but a few pages of two FBI agents visiting the site of an old unsolved case (for no apparent reason, asss we have noted) and unsuccessfully chasing a random eavesdropper. This is at best flimsy: at worst, it is a waste of pages and a waste of the popularity and ongoing potential of the X-Files property.

Better to Burn the World than Rule the World