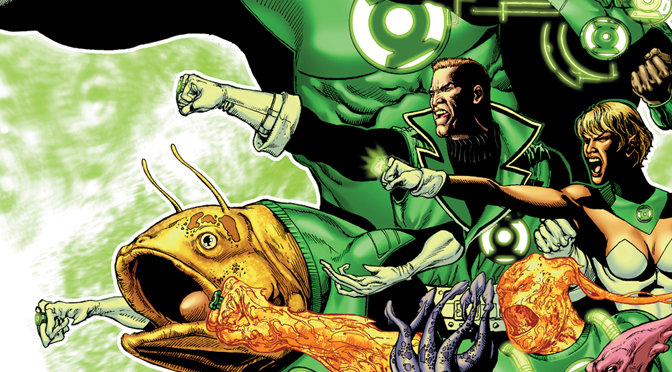 The Green Lantern Corps is a concept which borrows heavily from EE “Doc” Smith’s science fiction classics, known as The Lensmen series (1937-1960). The stories of both are founded on the idea that deep space is patrolled by benevolent aliens of different races, and that notwithstanding their differences both physically and philosophically, these galactic patrollers are united by altruism.

In Mr Smith’s books, the aliens are very alien, to the point of resembling looming monsters. In DC Comics’ Green Lantern Corps (created in 1959 by John Broome with editor Julius Schwartz), the points of alienness have always been much less sophisticated. Traditionally the Green Lantern Corps have consisted of many humanoids with different skin colours or animal features. Some of the Green Lanterns are sentient earth-type animals. One high point of the possibilities of the concept of alienness within the Corps’ ranks came in 1985 when writer Alan Moore created (as a passing mention) a Green Lantern which was a super-intelligent mathematical concept. Another Alan Moore creation, albeit one first based in the same, semi-comedic story, featured a sentient planet called Mogo which was a Green Lantern. But setting aside such irregular bursts of imagination, most of these alien lawmen have been depicted as having only marginally more biodiversity than Earthlings.

Here on earth there is a remarkable array of very strange animal life, ranging from jellyfish with eight eyes which look through the tops of their own translucent heads as they travel, to demodex mites which resemble stunted toothbrushes and live in human skin. There is no reason to think from even those two examples of strange life on this planet alone that sentience as it exists off-planet should be exclusive to humanoid beings with the same number of fingers as Earth humans. Nor should we expect to be able to identify some alien life forms which either exist in environments in which humans cannot readily perceive life (could we even see a being which lives in a civilisation near a neutron star?), or which might exist in dimensions for which humans have no senses. Biodiversity in the Green Lantern Corps has for the most part been trapped in the imaginations of those writers, such as Mr Broome, who in the 1960s first explored for teen boys the idea of alien life.

Another conceit of the Green Lantern Corps is that they are in number no more than three thousand six hundred and that this is a force sufficiently big enough to keep safe the entirety of the universe. Our present understanding of our own galaxy is that it contains between 100 billion to 400 billion stars. Assuming that only one in a million stars are worthy of policing, this means that each Green Lantern has in excess of one hundred thousand stars to patrol in this galaxy alone. For a human Green Lantern with a lifespan of 34 million minutes, this means each star receives 340 minutes’ worth of attention every lifetime (say, between five to six hours, including policing while in babyhood and while being very aged). That sort of basic mathematics was not in contemplation in 1960 and has never been properly revisited.

Some of those parts of galaxy are very unlikely to support any form of life. The galactic core is such a zone, as are regions around supernovae. Areas with insufficient metallicity are also unlikely to feature life. Even so, there is plenty of space to monitor, before anyone sets foot into other galaxies or, in this case, other universes.

Indeed, Green Lantern Corps: Edge of Oblivion 1 has multiple Green Lanterns stranded and separated in a dying universe. Why they are there is not obvious, nor is it apparent how this cohort became split into two. For all that this is a first issue, it is plain that new readers are not welcome. Pre-reading of some other title is necessary to understand how these characters came to be in their predicament and why these particular Green Lanterns feature in this story. And why another universe, despite the myriad of spectacles and adventures that could be had in this galaxy with its diversity of features, is not obvious either.

The Green Lanterns which appear in this story consist of some fan favourites (including the aforementioned Mogo) but otherwise are the usual lot of tentacle-haired purple skinned humanoids with two breasts, talking squirrels, sentient sloths, and carp with arms. All of these Green Lanterns, save for Mogo, are evenly proportioned in their torsos, have fingers, and have facial features with two eyes and a mouth. So almost all of these examples of aliens, each Green Lanterns, are homological chordates (see
http://www.madsci.org/posts/archives/1999-02/920061344.Ev.r.html for a lay explanation of that). But for the fact that they are described as alien, most would be regarded as being members of a particular niche of Earth animals with a common genetic ancestor (explaining the two eyes, the two ears, the one mouth common to almost all of these characters). The writer, Tom Taylor, is like his predecessors thinking within 1960s paradigms of what alien life might be like.

There is nothing especially new here. It is a plot for those who like seeing a favourite bunch of space-based superheroes send off insurmountable danger. Green Lanterns are, by reason of their sheer number, always open to having murders of their members plotted by the writer so as to set the scene for the peril they face, and so there should be no surprise that one is murdered in this story. Like the red-shirted ensign in classic Star Trek episodes, doomed to a horrible death so as to enable the audience to understand the danger faced by Captain James Kirk, at least one subsidiary Green Lantern tends to die brutally so as to outline the extent of danger faced by the favourites. Mr Taylor has fallen for almost droll temptation in using such an old device to propel the plot. For a story filled with aliens, this is all too familiar.