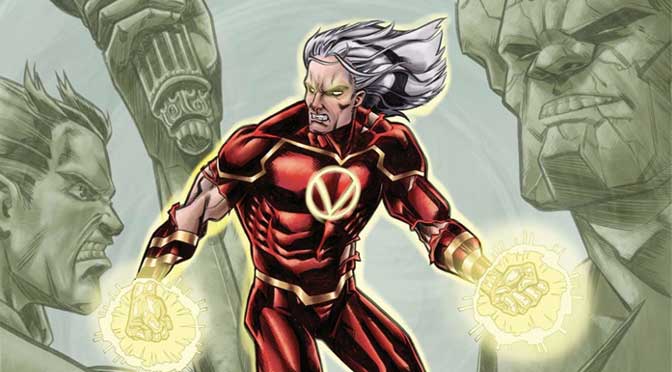 Superhero stories are zoos. They are filed with chattering and screeching, roaring and snarling, chest-pounding, posturing, and posing. These sorts of tales frequently feature city-wrecking battles, as enormously powerful beings wreak havoc on their urban surrounds. Occasionally we see death amidst the destruction (writers of superhero comics are prudish zoo-keepers, and only infrequently allow it).

But rarely in these stories do we see a significant head injury. Laced with violence, the superhero genre most frequently involves one character hitting another character in the head. In heavy contact professional sports, this can – indeed almost is guaranteed – to lead to Chronic Traumatic Encephalopathy (CTE). As the above link to the CNN article explains:

“The neurodegenerative brain disease can befound in individuals who have been exposed to repeated head trauma. The disease is pathologically marked by a buildup of abnormal tau protein in the brain that can disable neuropathways and lead to a variety of clinical symptoms. These include memory loss, confusion, impaired judgment, aggression, depression, anxiety, impulse control issues and sometimes suicidal behavior.”

Smacking an adversary in the skull in the case of superheroes and super villains, should, in a world thematically filled with punching, lead to CTE. Mr Torres’ story appears to deal with this medical condition. With the benefit of hindsight, CTE is an issue that should have been deal with in a superhero comic years ago. (The last time we recall a significant head injury in a superhero comic book was in 1987: Keith Giffen’s Justice League International for DC Comics. Batman’s knock-out punch of the vastly irritating Guy Gardner resulted in a personality disorder. But Mr Giffen treated the injury as a punchline to an ongoing joke, not as a serious consequence of an injury.)

We do indeed in this first issue have a cityscape in ruins (New York), caused by a fight between four superheroes and a red-clad supervillain with the dire sobriquet Oblivion. This character is very pale with long and straggling hair. We first see him digging himself out of the twisted steel and stone rubble of the smouldering remains of the Statue of Liberty, an inner monologue suggesting rebirth:

“My life began here… under the rubble, amidst the debris… surrounded by pieces of freedom and hope….”

Oblivion, a malevolent villain with powers capable of razing the rooftops of skyscrapers, is presumed both by authorities and his adversaries to be death as a consequence of his recent battle. But unbeknown to all, he is alive, but suffering from amnesia. The cause of his amnesia appears to be a head injury sustained in his combat with the four superheroes.

During that fight, Oblivion killed one of the superheroes. But as it evolves, he has no memory of that crime, nor of his identity at all. He does not recognise his own face in a mirror. Oblivion’s personality has changed from evil to quite ordinary: he is quite properly horrified when shown the destruction he has caused the city. Mr Torres has executed this well, for at no stage in this first issue do we see what Oblivion was like before his amnesia. As a reader, we are placed in the same position as the lead character. We only know him as he knows himself – as a lost and baffled man, while the rest of Mr Torres’ fictional world knows him as a monster. And, like all good monster stories, the beast should only be revealed at the end. (This is only the first issue, and so we are not there yet.)

How this transformed Oblivion will deal with the cadre of superheroes once they discover he is alive remains to be seen. Indeed, how he reacts when his adversaries inevitably seek vengeance for their fallen comrade is an interaction to look forward to, particularly that involving a character called Hi-Rise, who is the grieving father of the deceased superhero called C-Ment.

Ordinarily we are very skeptical about independently-published superhero stories. Too often they are self-indulgent, constituting writers’ fantasies of dealing with their favourite mainstream characters, the protagonists barely masked as not proprietary to a major US publisher. But this story is a unicorn within the menagerie: that rarest of beasts, a new and different take on a tired genre. We once again entirely approve of, and admire, Mr Torres’ eye for innovation.