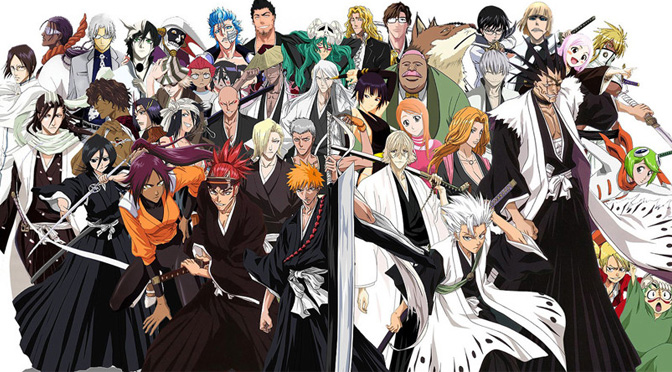 In August 2016, manga author Tite Kubo’s long-running shonen manga “Bleach” published its last chapter. The end of the series is controversial: there were initial comments from the author months prior that were vague, yet hinted that “Bleach” would go on for a few more years (when the author compared the length of the last story arc to an earlier arc that lasted a good few years). Weeks later however was another announcement that the series would only last a few more chapters, shortening the timeframe from fans’ assumption of years to a mere couple of months.

“Bleach” deserves its long lifespan and the multitudes of its fans. It started out uneventfully as Tite Kubo’s new series after his previous title, “ZombiePowder”, was cancelled due to poor reception from readers.

“Bleach” is on the face of it an unassuming story about a random mortal human named Ichigo blessed (or cursed) with extra sensory perception. Ichigo accidentally came across a wounded shinigami (a death reaper, spiritual beings tasked with guiding human souls to the afterlife or destroying those who refuse to move on) named Rukia.

In a bid to save the wounded shinigami from a strong Hollow (monsters borne out of souls consumed by hatred or regret), Ichigo took on Rukia’s powers. The series then went on with Rukia living discreetly inside Ichigo’s closet while the “substitute shinigami” patrolled around the city in her stead.

The series started its upward climb, both in terms of quality and in terms of reader approval, when Rukia was summoned back to “Soul Society,” the realm of the shinigami, and sentenced to death for letting a human borrow her power. Informally dubbed the “Soul Society Arc,” this lengthy story arc featured Ichigo and his friends taking on the entire Soul Society in order to rescue Rukia, with help from unexpected places.

The Soul Society Arc is where Bleach revealed the grand plot. Ichigo may be the protagonist and the brand identity of the property, but as far as the story goes, he is ancillary to a massive conspiracy to topple the heavens itself, a mere pawn in centuries-old chess match between two Machiavellian masterminds on opposing sides of a philosophical disagreement.

“Bleach” featured one of the most notable twists in a shonen franchise. A sympathetic, paternal shinigami named Sosuke Aizen was revealed in this arc as the main villain. Sosuke Aizen orchestrated everything that has ever happened in the series (including Rukia’s incarceration), helped by his unique ability to place enemies under complete hypnosis and the fact that he far outclasses most other shinigamis in terms of personal power and intellect.

It is worth pointing out at this point that another factor that made “Bleach” so popular is its detailed, sophisticated combat system. Each shinigami has a zanpaktou (or soul sword) that represents their individual spirits. In its “sealed” state, a zanpaktou looks like a normal sword. But a zanpaktou can be “released” in order to trigger a physical transformation and access to unique capabilities – such as the ability to shoot fireballs or manifesting an ethereal giant. These released swords have one more transformation – “bankai” or “full release” – which multiplies the character’s power and sometimes adds new abilities.

The difference between each zanpaktou added definition to the characters, and made for engaging battles scenes. One zanpaktou, by way of example, has the power to double the weight of anything it hits, which means being parried by the sword enough times disables the opponent on account of the weapon (or the opponent himself) being too heavy. Yet this ability is rendered useless against a zanpaktou that can transform into a floating stream of razor-sharp ash.

The Soul Society arc allowed Ichigo to clear Rukia of her crimes and gain the official sanction of Soul Society as a substitute shinigami. Ichigo was also instrumental in revealing Aizen’s betrayal, resulting in the villain’s strategic retreat alongside his co-conspirators after being faced with the combined might of Soul Society’s high-ranking shinigami officers.

What followed was Aizen’s preparation for a direct confrontation after failing subterfuge. Building an army of hollows with shinigami powers using a powerful forbidden artifact stolen from Soul Society, Aizen launched a direct assault after cleverly taking Ichigo and his friends out of the equation (as Ichigo is one of the few characters who have not been placed under hypnosis and, therefore, a credible threat). Ichigo underwent several power-ups and a rigorous quest while trapped in Aizen’s domain.

In order to defeat Aizen, Ichigo sacrificed all of his powers for one final transformation. In a refreshing break from most shonen formulas, this was not enough to defeat Aizen, but served only to weaken Aizen enough for a side character –a rival mastermind – to seal the villain using a series of forbidden magic spells.

Having defeated the main villain and losing his powers (including his extra sensory perception), “Bleach” wrapped up nicely as a solid narrative with twists and turns, and major plot points that were neatly resolved.

But the series continued, and unhappily. Ichigo’s powers and position as substitute shinigami were returned through a convoluted story arc that saw Mr Kubo’s indulge in random plotlines. Mr Kubo introduced swords that – upon cutting – can retroactively change a person’s past, or a power that can forcibly change enemies into toys and kept inside a dollhouse.

Jumping the Shark: The Vandenreich

The next story arc featured an enemy army called the Vandenreich. Mr Kubo uses subtle Nazi imagery and names to define the Vandenreich. The story arc started veering away from the idea that Ichigo is just a coincidentally influential cog in the story’s wheels. The protagonist, by all intents and purposes, is now a “chosen one” who has the powers of a hollow, a quincy, and a Shinigami. As such, Ichigo is depicted as the only one capable of beating the new main villain, “The Almighty” Juha Bach, who is said to be the twin of god and possesses the ability to see and alter the future.

At this point the general consensus amongst readers is that the author lost serious interest in the title and its authorial integrity. The plot became littered with formulaic reversals, where an enemy who has been seemingly beaten reveals a new power that completely negates the very same power that beat him in the first place, which prompts the protagonist to reveal his own secret power that negates the enemy’s new power, prompting the enemy to reveal yet another power. Such absurd twists earned the justified scorn of long-time readers.

In the end, Ichigo, in one of the most rewarding developments in the final story arc, teams up with Aizen in order to beat Juha Bach. But this was executed in one of the most unrewarding fight scenes in the franchise. The following wrap-up chapter was easily the best part as it showed all the main characters ten years after the battle, now living in a peaceful era and having undergone major life changes. It also left things open for a sequel, whereby Ichigo’s son and Rukia’s daughter exhibit shinigami powers. Those readers longing for the title to resume have this plot development as a lifeline. But should the title be revived?

The quality of the last story arc hint at a sudden change of mind by Mr Kubo: the story’s pace increased, characters whose fates were up in the air disappeared from the story completely, major battles were resolved either quickly, offscreen, or not at all. It was a huge disappointment for fans considering that Mr Kubo has earlier earned a reputation for controversial but clever twists and masterful plotting.

It is inaccurate to blame the cancellation on lack of success. This flies in the face of the series’ decades-long stint as one of the three leading manga properties and its forays into other media, which includes an anime series, several full-length animated films, a series of videogames on different platforms, and merchandise galore. “Bleach” is a financial success, often – with exceptions – a serviceable indicator of quality in the manga genre.

The real reason for the cancellation is known only to the publisher and the author. But there was indeed a marked decrease in reader satisfaction owing to the quality of the stories even before the cancellation rumors started. This may in turn have accelerated the degradation in the quality of the writing. “Bleach” should have ended after Aizen’s defeat. The marked decrease in quality is a result in the property overstaying its welcome and Mr Kubo spinning his wheels, clutching at concepts in a desire to perpetuate success.