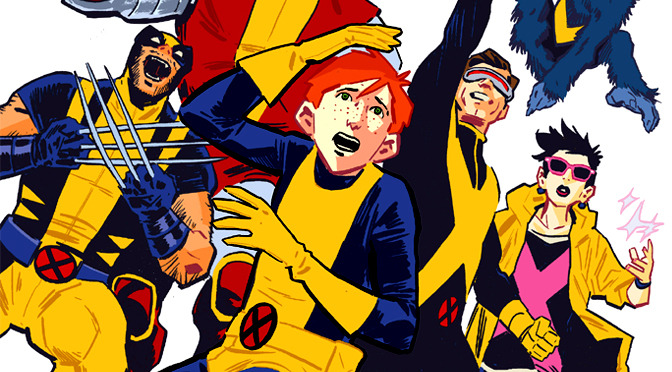 It seems obvious that American publisher Marvel Comic’s current crop of titles is an avid courting of the teenage demographic. This is done through relaunches of existing brands featuring younger characters taking over a legacy name, and stories tackling settings and issues relevant to early teens.

The reader will be forgiven for feeling like the comic is treading the familiar ground of Peter Parker (“Spider-Man”) and Marty McFly (“Back to the Future”). The writer, Max Bemis, writes decent and believable dialogue. But something about Bailey trading barbs with his gay best friend and trying (unsuccessfully) to learn new hobbies in an effort to fit in will ring as cliched – the content of any superhero comic book with a teenager as the main character within the past couple of years.

However, the story picks up after the protagonist gives up on his mundane quest for relevance, and gets “the talk” from his parents. Only instead of talking about getting a divorce, the character’s parents reveal that they’ve been hiding an important fact all along: they are mutants. The father is a pyrokinetic, while the mother has x-ray vision (it is a shame that the story did not delve into this, as anybody who has been a teenage boy knows what kind of disaster it would have been to have a mother who can see through walls.)

If “Worst X-Man Ever” was taking itself seriously at this point, the reveal might have served as a cliched catalyst for Bailey to feel depressed about being an outcast or a freak or being lied to all this time. Mr Bemis instead wrote the most realistic reaction a humdrum teenage boy would have over finding out that he may be a mutant – Bailey is eager to find out what his powers are, and overjoyed that he is not so normal after all.

There is just one last hurdle: they don’t know yet whether Bailey inherited the X gene or if he’s a regular homo sapien. So the Hoskins drop by the headquarters/school of the X-Men, a group of characters constituting one of Marvel Comics’ most popular assets.

There is both good and bad news for Bailey. The former is that he is indeed a mutant. The latter is that he is exactly what the title implies. His mutant ability is to make himself explode. Bailey was initially delighted at knowing his superpower. The problem is that is all there is to his power. He can make his body explode. But the character does not have any invulnerability or regenerative abilities. If he uses his power, he will simply explode and he will be dead.

The story is still comedic at this point. The character even acknowledged the silver lining and stated that he at least still has his parents.

And then the story stops being comedic and turns into a tragedy. Bailey’s parents are crushed by a mutant-hunting robot called a Sentinel. The X-Men make quick work of the robot, but the action is merely the out-of-focus backdrop to a shot of a teary-eyed Bailey realizing that he’s got nothing left.

The denouement of the issue has Bailey left with no choice but to stay at the academy, and is provided with a bulletproof armored suit on the condition that he trains how to use it first. The issue ends with the school’s alarm system going off, and Bailey looking at the suit, making a decision to join in.

The issue is admittedly surprising. An older reader may feel the need to stop reading after a few pages if not part of the age group that Marvel is currently targeting. But keep at it. It is not a story meant to pander to teenagers with their boybands and skateboards and crushes and social lives – it is a genuine take on what it would be like to be one of the unnamed mutants saddled with a useless power while in the company of steel-skinned giants and weather-controlling goddesses.

One also cannot help but be curious as to how Mr Bemis plans to wrap this miniseries up. Is there a plot twist coming with regard to Bailey’s powers or will he finally get a chance to be exceptional even with such stark powers? The nature of the superpower suggests a heroic sacrifice, and we hope that Mr Beamis resists the temptation. Setting aside that one reservation, “X-Men: Worst X-Man Ever” is definitely a comic to watch and we look forward to the plot unfolding.