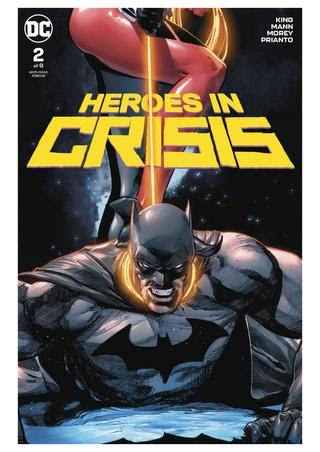 Has DC Comics finally grown up when it comes to mental health issues?

For decades, American superhero comics publisher DC Comics has used the word “crisis” to indicate a significant storyline. This nomenclature is dealt with in detail on this Wikipedia page.  These tales are often very dramatic – at least two involved the destruction of universes and time lines as part of DC Comics’ periodic pruning of its thorny continuity.

In this title, however, we see a use of the term “crisis” in the sense much more likely to be used in everyday life – to describe a psychological crisis. Heroes in Crisis is an unusual storyline, in that it examines the mental crises and troubles of some of DC Comics’ major characters. There is an increasing awareness nowadays that mental health issues are very prevalent, are debilitating, should be talked about, and can be treated.

Mental illness is often depicted in DC Comics’ plots as the origin of various motley villains – for example, the Joker, the Scarecrow, Dr Destiny, and the poorly-named Dr Psycho. Many of Batman’s nemeses are locked up in a miserable mental health facility called Arkham Asylum. These characters are depicted as beyond cure, suffering from horrible mental illness manifesting in extreme violence and fetishism. The fact that a mental institution is the go-to repository for Batman’s enemies is very sad, and encourages outdated perspectives on mental health.

And so, in contrast, taking a look at the internal turmoils of its more altruistic characters, through the lens of a series of counselling sessions, is a surprisingly mature look at mental health.

That is not to say that the title is just a succession of panels featuring superheroes crying. There is some violent action, the severity of which is demonstrated by a significant body count. Readers  always, understandably, have a degree of suspicion when it comes to the death of characters within the titles of American superhero genre comic book publishers. The death of a superhero character is akin to a trip to the dentist: irritating, sometimes unnecessary, sometimes revealing fundamental rot. (The only significant exception to this within DC Comics’ continuity is the 1970s hero Manhunter – resurrection of Paul Kirk would be seen as disrespectful to the character’s two iconic creators, Archie Goodwin and Walt Simonson.)

In this title we witness two historic superheroes, Wally West (one of the characters who goes by the name of the Flash) and Roy Harper (also known as Arsenal) dead on the porch of a rural rehabilitation or respite centre. In issue three, we learn that West has been brained by the psychotic Bat-villain, Harley Quinn. When Superman and Wonder Woman survey the carnage, both are “confirmed” as deceased.

The Boy Who Never Grew Up

Much of the story revolves around a character called Booster Gold. Booster Gold was a product of the 1980s, and concerns a superhero from the future, once a football sports celebrity, who seeks fame and respect but finds himself confronted by Everyman troubles. Booster Gold uses purloined super powers, and is more or less what he is through happenstance not through daring, wit, divinity.

1. both Superman and Batman are fathers;2. the children of Marvel Comics’ Fantastic Four are now teenagers who dye their hair at inappropriate moments, and 3. Wolverine, the clawed beserker whose adventures are also published by Marvel Comics, has a female clone of himself who he regards as a daughter.

With Booster Gold we have that other type of grown-up: the one who never fulfilled his ambitions, who is unable to adequately deal with the stresses of life, who secretly thinks he is out of his depth. Booster Gold is lost and depressed. He sits in a diner nursing a coffee, a listless audience to Harley Quinn’s ramblings.

It seems he is not alone in the need for time out. The diner is in a place called Sanctuary. This is a respite for superheroes who are down and out. There are quite a few of them, too, having regard to the roll call at the conclusion of issue 3. (This includes a magnificent Easter Egg for the core demographic – Protector, a Reagan-era character, with a singular New Teen Titans appearance, created back in the day to warn kids not to do drugs in furtherance of Nancy Reagan’s campaign against drug use by kids.)


Almost all of these characters appearing on that last page are either obscure or insignificant. They all address a camera and pour out their hearts, on the premise that the recordings will be erased. There is some interesting psychology attached to the idea of a person being willing to talk to a camera – or a robot – knowing the recording is ephemeral, and the listener brings no judgement to the conversation. (There is also one villain who participated in the therapy:

But we also see DC Comics’ three most significant characters engaging in the same cathartic behaviour, and particularly, of all people, an unmasked Batman, upset about the exposure to harm he brings to his sidekicks.

The autopsy of Commander Steel indicates that someone has placed a mechanical chattering teeth toy in the dead heroes’ throat. This suggests that Batman’s archenemy the Joker is behind the attack on Sanctuary which has apparently left all of its patients dead and the computer records of the facility stolen. Does this mean the Joker now knows who Batman is? The records are then anonymously sent to Daily Planet reporter Lois Lane – not quite the Joker’s style.

The Joker’s historic sidekick is Harley Quinn, also the two are only infrequently seen in tandem in recent years. Harley Quinn for her part restores her reputation for being a sociopath in this title. In addition to smashing in the skull of the Flash, she also repeatedly stabs Booster Gold in the abdomen in a flash of madness. Her own video interview reveals she is aware of and horrified by her insanity.

There are some flaws – could Harley Quinn really have taken Wonder Woman’s magic lasso and garrotted Batman with it? But otherwise, this is a compelling, well-structure story from Mr King. The fourth issue is due out within the next week.