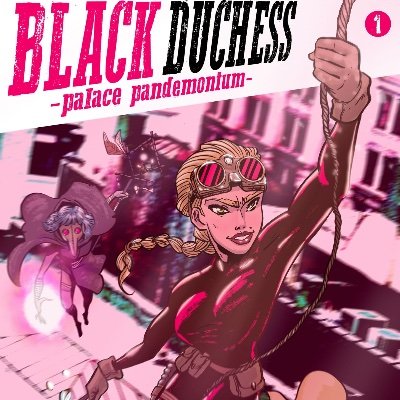 Heist plots are always entertaining, but integrating a heist into the superhero genre with its godlike musclemen is a tricky endeavour. The short pitch to this comic, Black Duchess #1, reads as follows:

A new indie comic about a wily thief forced to rely on nothing but her wits to pay back a sinister mobster after a stint in prison.

The cover is a little misleading. Here we have a busty thief in tight black clothing, in an artistic style very reminiscent of Danger Girl‘s creator Scott Campbell, grinning while she swings through the air and being chased by various superheroes. But the story (and the wonderful interior art, by JP Vilchis) is much better than that.

Having been sprung out of jail by a mobster, Callie, a thief once known as the Black Duchess, has to work off the debt. The parallels to American publisher DC Comics’ Catwoman are obvious, but there are sharp distinctions. First, Callie is a reluctant criminal who wanted to turn away from crime, and does not want to be murdered if she fails to repay the cost of the lawyer whose work got her out of jail. There is no explosive bracelet by way of coercion like DC Comics’ Suicide Squad, but the threat is made plain.

Second, Callie is a little past her prime. The title is a unique study of a female supervillain who has aged, and is not the traditional high-heeled scantily-clad femme fatale we see so often in Marvel Comics’ and DC Comics’ rotunda of characters. Comic book characters tend not to age, other than very old concepts (such as DC Comics’ Justice Society of America) where we see the obligatory grey streak at the temples and little more. The only other female character we can think of who has been allowed to age is the title character in Ed Brubaker’s Velvet, which we reviewed in 2015 https://www.worldcomicbookreview.com/2015/06/09/the-secret-lives-of-dead-men-brubakers-velvet-the-james-bond-mythos-and-the-spectre-of-ian-fleming/ .

Callie is however resourceful like Catwoman, and relies upon some surprisingly effective low-tech solutions to deal with a bunch of superheroes who are guarding a fabulously expensive diamond.

As to those superheroes, Powerman, an obvious doppelganger for Superman, is a messy drunk, and Magpie is a deep introvert. Both serve as comic relief: without them, the story would perhaps take itself too seriously.

By the end, Callie, initially both surprised and exuberant at her success, is stuck with the same debt and, in addition, a pack of superheroes keen on bringing her to justice, motivated by the audacious robbery of their citadel (which fans of the 1970s children’s animated cartoon Superfriends will recognise as the Hall of Justice, also known as the art deco Cincinatti Union Terminal https://en.wikipedia.org/wiki/Cincinnati_Union_Terminal ). Callie gets through by the skin of her teeth and with the benefit of some good luck. And the final pages are very funny.

We were not sure what to expect from this title as a consequence of the cover: perhaps the common sexual fetishes which superhero comics are notorious for, and which are very common in crowd-funded titles (this title was funded on the Indie Go-Go platform). Andour only other (admittedly small) complaint is the depiction of the mobster: gleaming white teeth in the darkness is a cliche with a high watermark of Eduardo Russo’s art in 100 Bullets, and nothing noteworthy since. A bland accountant in a suit might have somehow been more believably threatening. But we were otherwise very pleased to have read such an entertaining, well-plotted heist story, and look forward to many future issues.

This title is for sale at https://sellfy.com/bob-s-comics/p/black-duchess-1/ .

“100 Bullets” revisited, Part 1 of 3: Croatoa, MK Ultra, and the induced amnesia of the Minutemen