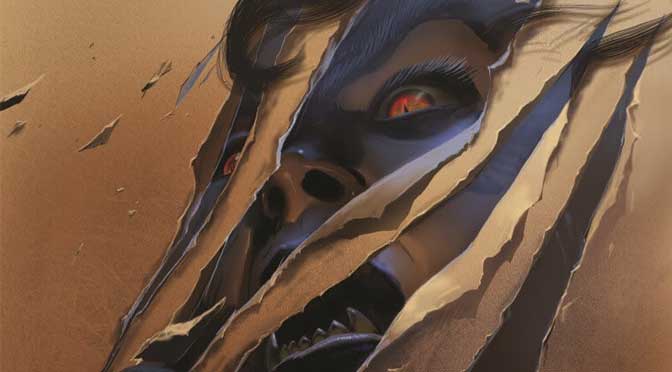 “The Howling: Revenge of the Werewolf Queen” is a new comic book series from Space Goat Publishing. This publisher is known for comic book adaptations and reboots of classic properties from different mediums. “Revenge of the Werewolf Queen” serves as a direct sequel to the 1980s horror motion picture, “The Howling.” That classic motion picture was to do with a TV journalist who spent a vacation on a remote mountain resort as a way of recovering from the experience of being stalked by a serial killer, only to discover that the resort’s inhabitants are all werewolves.

The comic picks up where the movie left off, with a werewolf transforming and being shot in front of a camera broadcasting live to an audience. Under normal circumstances, such dependence on pre-existing story found in a different medium might work against a comic book adaptation. But “The Howling: Revenge of the Werewolf” serves as a standalone story that can be enjoyed even if the reader is not aware that it is a continuation of an existing premise.

For all intents and purposes, the backstory is easily provided in the introductory pages of the comic: that of the footage of a werewolf transforming and subsequently being killed by a gunshot. The movie’s cliffhanger ending implied that the existence of werewolves have been proven to the world, but the comic’s story shows that things are not always that simple.

The public, being accustomed to the falsehoods being peddled on network TV, must have assumed that the incident was staged. This is underscored by the assessment of the police, who arrived on the scene but only saw the body of a normal person. That is how the werewolf curse functions: the body reverts back to human form upon death. As a consequence, the person who pulled the trigger, the feature’s producer Chris Halloran, is charged with the murder and is only out on bail.

Halloran so far serves as the protagonist of the comic. The character’s main challenge is that he has to prove his innocence, despite the fact that potential witnesses are ending up dead before he manages to convince them to testify on his behalf. Peripheral to this is the discovery that there are inhabitants of the island that have survived (the movie ended with the island and its inhabitants being burned by the film’s protagonists), and that their leader, the Werewolf Queen, is back for revenge.

Other reviews of this comic have been equally enthusiastic:

At “Horror News Network” , reviewer Rob Caprilozzi notes, “After reading through an advanced review copy, I can happily say that fans of The Howling will enjoy this debut issue. Issue #1 picks up three weeks after the events at the end of the first Howling film. We are treated to the stunning final moments of Karen White and that locks us in for the rest of the issue.”

Reviewer Fox Emm at “Wicked Horror” states, “The writing is exceptional, in that it gives enough detail to let readers know the key plot elements without bogging them down with a recap of the entire plot and history. This is the first comic I’ve read by Micky Neilson, but I’m hooked.”

“It’s good, the cheese. It’s very good… That’s what you came for, isn’t it? Arcane McGuffins, dress-shredding wolf-outs, snub-nosed revolvers, rotary telephones, gratuitous beheadings and all the best fashion of 1981? This stuff is a blast, and it’s this sense of smirking dangerous fun that makes this issue (and hopefully the rest of the series) work so well,” says reviewer A. Quinton of Werewolf-News.com.

“The Howling: Revenge of the Werewolf Queen” stands as a good example of how to do sequels and adaptations of existing franchises. The story is tied closely enough to the original source that fans (or new readers who took the time to do research) will catch references and will enjoy putting the pieces together. New readers should enjoy the story on its own without getting the feeling that they are missing out on details.The cliffhanger ending in “The Howling: Revenge of the Werewolf Queen” places a demand on readers to continue reading the series. Despite – or perhaps because of – some cheesy elements that are left over from the property’s 1980s horror film origins, it still stands on its own as a decent horror comic book.