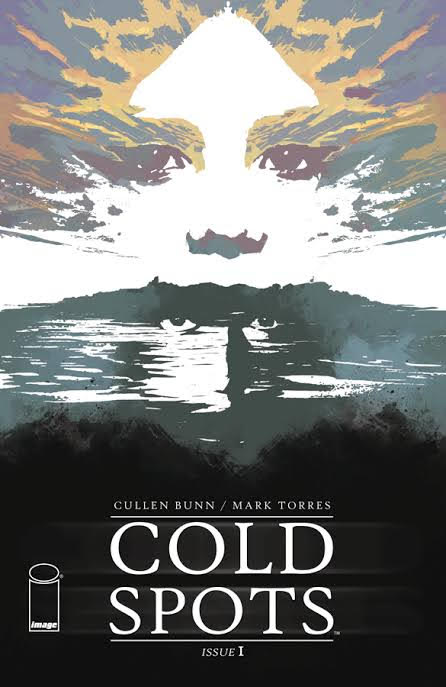 Probably one of the creepiest comics we have read, Cold Spots is a horror story embodied in a quest. Arthur Warren dispatches a man named Kerr to find his daughter Alyssa and grand-daughter Grace, which is the essence of the quest. The two have gone missing and there appears to be some strangers on the internet involved. This leads to a trip to an island, with intermittent ferry service. Kerr must wait for the next day.

But the ancillary features of the story carry the chill. A man awakes to find his wife adoringly watching his two boys playing in the yard…. but the boys are dead, and here instead we see two faceless children, one on a swing and the other running and kicking a ball, their eyes burning circles. Later, as Kerr investigates Grace’s bedroom, there are hand-drawn portraits on the wall. These feature an unsmiling Grace and her mother, surrounded by grey smears in the shape of humans. And later, when Kerr tries to catch a ferry to the island, the man who offers Kerr a hotel room sees the spectre of a dead lover, who reduces him to molten wax.

The perversion of the innocence of childhood in horror stories is an old ruse. As noted in The Guardian, childhood innocence “is, at one level, a rarefied quality of ignorance. To not grasp imaginatively that death will come. To be ignorant of sex, likewise. To believe in the irrational – Santa Claus, fairies, monsters under the bed. And, of course, the myth of the infinite power and goodness of parents.” Juxtaposing children with terror is jarring : “a child in the role of victim and ghost…. makes the stories more frightening since they challenge the reader’s expectations of children’s innocence.”

We have read Mr Bunn‘s work many times before, on superhero titles, and once with his writing chores on Pumpkinhead. Mr Bunn is wasted on capes and masks. Mr Bunn’s forte in our view is in horror writing.