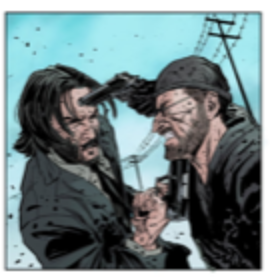 Recently we received this message by way of our Contact Us page :

I write a webcomic called @threepanelcrimes on instagram. It’s a different crime story told each week in just three silent panels. We’ve been going for almost two years now and have just over 19k readers and 122 stories posted.

Anthologies are frankly a headache to review, and we have unfortunately a positive bias against it. This is because each story in an anthology requires its own care and attention by the reviewer, so that critiquing an anthology is a multiplication of effort. And anthologies in our experience often consist of a champion story which carries the title and several other stories which let the team down – it is awkward news to break to the team of creators that some of them are good and some of them are not-so good. With some weary trepidation, we clicked on the link to Three Panel Crimes.

It is a remarkable compilation. Three panels on the face of it seems bite-sized, and therefore perfectly rendered for the short attention spans of the internet generation. But the apparent simplicity of telling a story, without any text, within the space of three comic book panels is a deception. Each of the stories has intricacies and twists which usually require a lot of thought by the reader. Some of the stories are not obvious at all and capable of multiple interpretations. Other stories are confronting.

Others haunt you, in the sense that hours later, or upon a re-visitation of the story, its meaning descends upon you out of the sun.

None of the stories are without their challenges or laden meanings. It is as if each story is its own haiku, as one reader observed in a comment on Instagram.

Further, each story features a different artist, and this adds another layer to the work. One of the inherent values of comics books is that an artist has their own interpretation of the pre-art text and adds to the work though the art. Here, instead, multiple artists add to multiple stories by the same author within the crime genre. It is a concept we have not properly considered before: the idea that multiple artists are a orchestra, led by the writer as the conductor, all in pursuit of thematic iterations.

Of interest also is how Mr Fabro takes advantage of Instagram’s platform. Three Panel Crime’s audience collectively ponder and interpret with each new release. There is a sense of community as they together muse through meanings and fine detail. In their own way the audience contribute to the creation of the work, building interpretative layers in a highly collegial way.

A printed collection of Mr Fabro’s best examples would be a welcome read – but how to identify from such a remarkable body of work which is best?