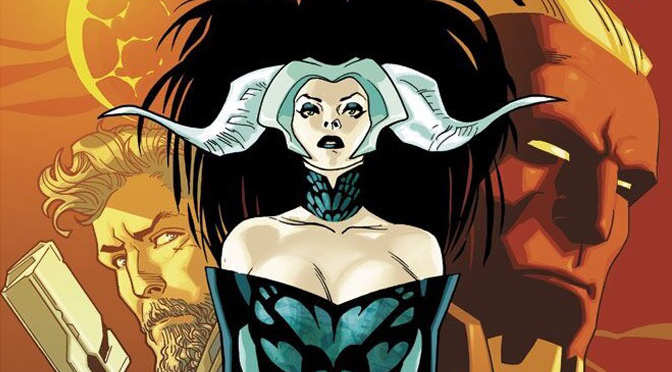 A critique of this title involves two curious vectors.

First, at some point in many people’s lives, sadly, they can become involved in very unhappy, abusive or even violent relationships. This can occur, particularly but by no means exclusively, when a person is young and lacks judgement and experience in respect of the substance of a happy relationship.

Setting aside the nature of mis-spent relationships for a moment, and on what might seem at first blush off tangent, American comic books seem to have a steady supply of science fiction villains (featured in superhero comic books, ordinarily) with beetle-browed, monolithic features, a grim demeanour, and who are exclusively male. These include, in no particular order:

Some of these are so similar in appearance that they could be brothers.

British writer Mark Millar poses the question: what if, when you were young and foolish, you married one of these galactic tyrants? How does the wife of a bloody ruler of an interplanetary civilisation cope?

“Empress” is a story set on a myriad of exotic planets, including the Earth, sixty-five million years ago. A galactic empire is ruled by Morax, a brutal and insane despot, who one day met a young girl who was filling in on a shift in a bar, and offered her worlds. Years later, bestowed with the name “Emporia”, she has given Morax three children but wants to get herself and her offspring away from Morax’s murderous inclinations as quickly as possible.

To this end, Emporia enlists the assistance of her personal bodyguard, a swashbucker named Dane who has more than a dash of Errol Flynn and Flash Gordon about him. Emporia also drags along her children in her exodus, the eldest of which is entirely reluctant to leave her father and his lifestyle. Mutiny seems imminent and the tension betwen mother and daughter sets up an interesting future confrontation. The second issue takes the characters offworld, and introduces additional, colourful protagonists and adversaries.

Mr Millar made his reputation writing “The Authority” for Wildstorm Comics in 2000, transforming an obscure title into an international bestseller, and altering the fundaments of superhero comics through the introduction of pointed geopolitical controversy. He has rarely made a mistake since: he is a font of creativity and flair, who actively seeks out new tangents within the American body of work. In that regard, this story is entirely within expectations.