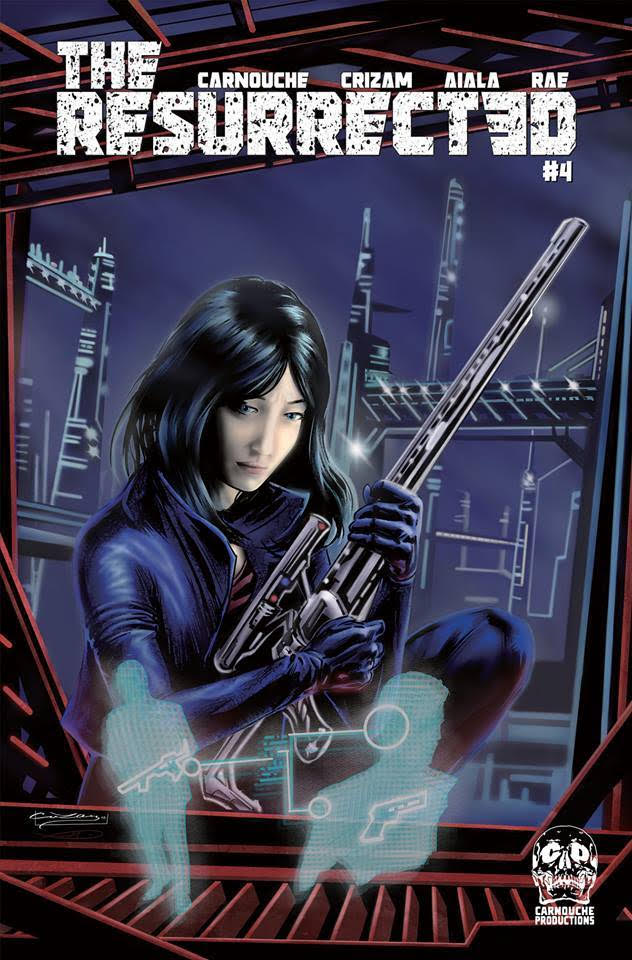 Writer Christian Carnouche has been penning science fiction comic book titles The Resurrected for over a year, and has now reached his fourth issue. (We have been following The Resurrected from its inception.)

In our recent review of issue 2, we explored how the evil Drexler Corporation exploits the genetic information of Aboriginal Australians, and to that end has taken advantage of a drone swarm attack which wiped out most of the Australian population. A lot of serious and original thought has gone into this underpinning concept of genetic exploitation – newly trodden ground, so far as we are aware, for a science fiction story (short story, novel, comic, or otherwise).

Similarly, meticulous care and attention was taken by Mr Carnouche to the characterisation of the protagonist, the gruff and emotionally scarred Duluth. The character is a broken man held together by anger (sadly, a common state of affairs for Aboriginal people in especially urban Australia) and a paranoid mistrust of technology. Duluth hates himself as much as those he stalks. There is a chill of self-destruction about him as he interacts with the other characters in the story. The man passes time alone with painkillers for a companion. We have the sense that either death by his own hand, or by some lethal situation of his own choosing, was stayed only by the overarching circumstances of the title.

This patient masonry, building up the story from strong foundations, has now finished. All of the characters are now understood, and Mr Carnouche proceeds to deploy them in a miasma of action. Duluth and his companions, pursued by a United Nations patrolling aircraft, crash into the desert (which one is not obvious – Australia has several large ones). They are rescued from death by Australian rebels, a mix of soldiers and indigenous people, lead by a wheelchair bound man named Billy. But Duluth has unwittingly lead Drexler paramilitaries to the rebel hideout and, as Billy offers hope to Duluth in the middle of a firefight, Billy is shot in the neck. The soldiers capture Pem, the hulking Aboriginal warrior who dispatches his opponents with a large club called a “waddy”, and having secured a genetic motherload, withdraw from the destroyed desert base.

The storyline reads a little like the climax of the 1990 motion picture Total Recall but there are also shades of Star Wars: Rogue One, with a sinister caped leader imperiously directing black masked soldiers into battle. That does not detract from the action – in many ways, it gives the story a template to follow which is recognisable to the audience. But, without doubt, for good or ill, it is a recognisable action sequence.

There are some genuine surprises in this issue. The monk-like Pem as it evolves has an enormous amount of innocent blood on his hands, which renders that character a zealot rather than a freedom fighter. And Duluth’s detective partner Akimi Ozaki unexpectedly meets an heroic and explosive end. Killing both the character the nascent romance in the title of itself suggests an unhappy fate for Duluth.

The next stop for the tired and battered heroes upon being thoroughly beaten by the Drexler stormtroopers is the ruined and overgrown city of Sydney, to rescue Pem. We suspect that Mr Carnouche approaches his endgame. We look forward to seeing what he can deliver to bring the story to a conclusion.

The Resurrected is available on Comixology.