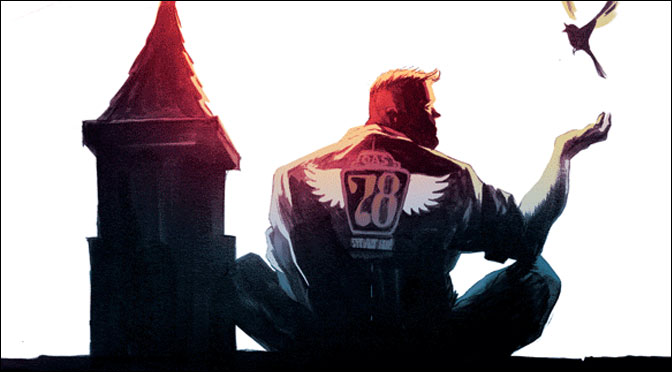 Writer Mark Millar’s work has a certain reputation for edginess.  This is the man who wrote comics such as:

Mr. Millar’s characters tend towards excessive hedonism even in his heroes:  his villains shatter any and all social taboos at will.  Many of his works, such as the two aforementioned comics, as well as Kingsman and Marvel Comics’ Civil War,  have been adapted to film. Most recently the online streaming service Netflix purchased his line of Millarworld comics, presumably for the purpose of adapting more of  Mr Millar’s work to video.

But as much as Mr. Millar’s work showcases excessive violence, swearing, and even the occasional bit of cannibalism, he found himself shocked by  a superhero genre adaption that may not have looked out of place in one of his own comics.  In an essay, Mr. Millar explained that the 2013 motion picture Man of Steel (Warner Brothers) left him, in his own words, traumatized.  The film, of course, is a new version of the old DC Comics character of Superman. At the conclusion of the film, Superman finds himself in a bind battling General Zod, a villain with all the same powers as Superman himself.  Zod has already caused a great deal of death and destruction, and in order to save a group of trapped people, Superman breaks Zod’s neck, killing him.

For Mr. Millar and others, this was a very un-Superman like act.  As Mr. Millar said in his piece, “[Superman] could do anything he wanted to and still chose to be nice.”  Seeing Superman kill anyone, even in a situation where there may not have been a better option, did not sit well with Mr. Millar.  The film does, to its credit, show Superman’s immediate reaction is a cry of anguish.But then the character forgets this moment in the final few scenes of the movie.  Superman seems to be just fine, without a single bit of guilt over his  murder of the villain.

To answer this moment, Mr. Millar created the character and series of Huck.  Huck is a large man, lantern-jawed, blonde-haired and blue-eyed.  He lives in a small town in rural Maine where he works as a gas station attendant.  If he has more of a name than “Huck,” the comic never says.  Huck lives a simple, quiet life, doing a good deed for his neighbors every day.  These deeds can be as simple as taking out the garbage for everyone in town, to buying breakfast for everyone in line at the drive-in restaurant, despite the fact Huck does not himself own a car.  Some of Huck’s deeds, however, are not so simple, but are a secret  guarded by the entire town.  Huck, it seems, has some superpowers.  He is very strong and fast, and appears to possess a good deal of resistance to injury.  He also possesses an ability to find things.  Huck can locate anything, living or not, if he puts his mind to it.  He only needs a name or a picture if he’s never seen or encountered the person or object before.  To demonstrate this ability, Huck is asked to find one woman’s missing husband, another woman’s missing brother, an older couple’s missing daughter, and a small boy’s missing dog.  Huck, without too much effort on his part, finds the husband living with a second family, the brother being held by insurgent fighters in Afghanistan ( Huck rescues the man but does so while making sure he does not hurt any of the Afghans too badly), the daughter strung out on drugs in a bad neighborhood in New Jersey, and the dog stuck but otherwise fine in a cave.

For Huck, the most important thing is helping people.  His abilities are a communal secret held by the entire town where he was left as an infant on the steps of a local orphanage. Huck’s abilities are only revealed when a new neighbor moves in, and feels the public should know about Huck after he sneaks off to Nigeria to rescue a group of school girls from Boko Haram.

And though Huck is initially not happy to be revealed, he takes to it well.  Huck appears to be a simple man, one other characters assume is stupid.  However, one could be reminded of the late satirical fantasy author Terry Pratchett’s character of Captain Carrot Ironfoundersson.  A human raised by dwarves, Carrot was described by Pratchett as “simple,” but then clarified that “simple” was not the same as “stupid”.  That  assessment describes the character of Huck very well.

When a man comes to Huck, claiming to be his brother and looking to find their lost mother, an escapee from a Soviet attempt to breed super soldiers for the Cold War, Huck readily goes to it.  The other man, claiming to be named “Tom,” is, in fact, an artificial intelligence and not Huck’s brother, and is a catalyst to the plot: Tom leads Huck to inadvertently reveal his mother’s location to her former Russian captives.   Huck’s mother also has similar physical abilities to Huck, but her psychic powers lead more to making people do exactly as she says when she comes into physical contact with them.After escaping from Russia while six months pregnant, Huck’s mother was living a quiet life in America as a music teacher until Huck found her with the robotic Tom in tow.

But for all that Huck is largely seen as an imbecile, it is Huck who figures out the way out of the Russian trap that was designed to hold both Huck and his mother.  Like Carrot, Huck is a simple man, but he may not be a stupid one.  But is Huck a better Superman than Superman?  As an altruist, that could very well be the case.  Mr Millar clearly intends that Huck never seems to stop to think about himself.  Even his romantic self-interest seems non-existent. Within DC Comics’ longstanding continuity, Superman has feelings for girlfriend/wife Lois Lane that shows a side top the character that is not just about helping others.  But within this title, the closest Huck comes to that is he has a childlike crush on a woman running the local flower shop to whom he eventually gives a bouquet of flowers.  Even when the character is captured by his adversaries, Huck’s entire effort is to do with rescuing his mother rather than anything else.  Within DC Comics’s title such as All-Star Superman (written by Grant Morrison in 2011),  and many of the better Superman stories, it is plain that Superman is not only an altruist but also a role model.  Superman is often presented as someone not just there to help, but also to inspire others to be better people. That is not the case with the current cinematic version of Superman, which is the essence of Mr Millar’s complaint.  This new motion picture Superman is supposed to be inspiring, but does not come across that way at all.  For example, the character’s general mopey appearance in the second motion picture in the series, Batman v Superman (2016) is supposed to be a manifestation of the character’s  guilt over the murder of Zod in Man of Steel.  This is entirely unsupported by any element of dialogue or action within the second motion picture, is only apparent when the movie’s director, Zach Snyder, explains it in interviews.

But Huck does not inspire people to be better.  Huck is just there to help.  Some of the character’s activities border on the ridiculous in execution.  While traveling to where his mother is hiding, Huck stops to cover “emergencies” along the way, to the increasing frustration of his fake brother.  One of those deeds is blocking traffic until some baby ducks can safely cross the road.  Perhaps the closest Huck comes to being a role model is at the very end of the volume, where Huck offers forgiveness to the woman who exposed him to the media, because he feels bad for her. Ultimately Huck concludes that being in the public eye means he can help even more people.  His business sign, such as it is, only reads “Happy to Help”.   Huck’s singular purpose is about helping others, but somehow there never seems to be any concern from Huck that other people might themselves try to be more like him. In that regard, Huck is different from Superman.

Like many of Mr. Millar’s work, the dialogue in Huck is often minimal in fairly eventful stories.  His work often has strong visual elements that work well in the comic book setting while also making things easier for cinematic adaptation.  Huck could make for a strong film or television show. It is a fine example that not everything Mr. Millar writes is ugly and violent, and that he is very much capable of writing a hero as a nice man who could commit all manner of violent acts with little fear of repercussions, but simply chooses not to.