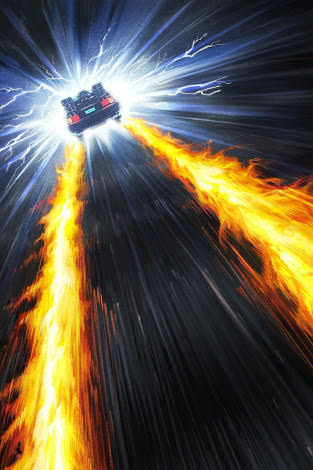 The motion picture Back to the Future has had remarkable longevity of popularity in Japan. It was therefore no surprise that the film was to be adapted into a manga, even though the gap between the two is 33 years.

The internationally successful 1985 movie starred American actor Michael J. Fox as teenager Marty McFly. McFly is sent back in time to 1955 by a mad scientist named Doc Brown (played by actor Christopher Lloyd). The mechanism of time travel is a plutonium-powered DeLorean (a futuristic Irish-manufactured sports car, nowadays of cultish appeal because of the motion picture). McFly shapes the lives of his teenaged future parents, and, awkwardly, becomes his mother’s love interest. McFly eventually repairs the damage he has wrought to the space-time continuum and returns to the future of 1985, to find that things are much better than he left them.

Yuusake Murata, the artist of One Punch Man (which we have previously reviewed) and Eyeshield 21 was to produce a much-anticipated Back to the Future manga, to be published by Kono Manga ga Sugoi! (“This Manga is Awesome!”). To add credibility and authenticity to the product, the motion picture’s screen writer Bob Gale was to maintain curatorial oversight of the manga.

But last week Mr Murata shared disappointing news: the manga has been canceled.

“Even though people in the editorial department have done everything we can do, there is still the situation where planning has been suspended because the clearance of the rights of copyrighted works… is not completed. I am sorry for those who were looking forward to it.”

In essence, the Kono Manga ga Sugoi! editors decided to cancel the manga due to licensing issues – prompting the question, why was the manga so well-promoted when these fundamental licensing legal issues were not resolved?

To rub salt into the wounds of fan of the movie franchise, Mr Murata produced some excellent concept and promotional art, which we set out below: