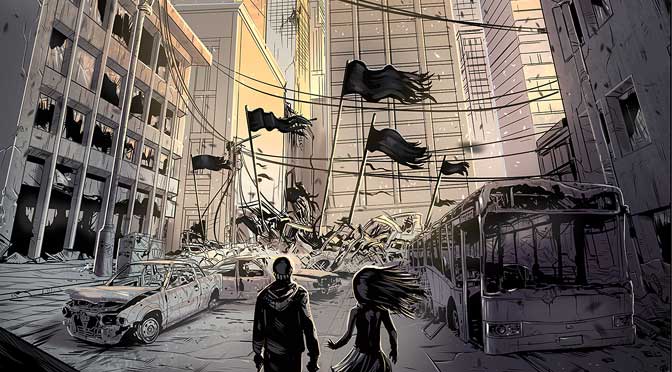 What if someone extrapolated the worst philosophies and beliefs of the far right US Tea Party movement to its more extreme and dystopian consequences? Credible Threat Press is a small creator-owned comic book publishing company located in Toronto, Ontario, Canada. The location of the publisher in respect of this series, entitled Our War, is notable. Sharing a very porous border with the United States, with centrist parliamentary tradition, and presently with a liberal and fair-minded prime minister, Canadians must be entirely bemused by the political bizarreness they have recently witnessed happening south of their border. (It has predictably not been well-received, according to this poll).

Writer Luke Henderson pours weapons-grade rocket fuel upon two of the most high profile elements of right wing Americanism. First, what if conservative radicals, willing to shut down the Federal government rather than allow the government to go further into debt, procured government inactivity to the point of mass unemployment, lawlessness, and societal chaos? Second, that if the belief that heavily armed private militias have a role to play in protection of the citizenry lead to uncontrollable militiamen patrolling the streets?

OUR WAR – Volume 1: The Truth Untold collects OUR WAR #1-#4. This is a jarring story. It is unsettling because the plot landscape of the United States as a lawless third world country is entirely believable. The story follows two protagonists. One is a woman from Texas, named Emma, who has mistakenly believed that there are jobs and security in New York. “But they said New York was different. They said there were jobs in New York. That it wasn’t as bad as everywhere else.” The dialogue conveys fractured hope with finesse.

Emma is quickly corrected in her thinking when her purse is snatched by a thief. The thief is quickly shot through the head by a patrolling militiaman named Randall. Randall wears a cap with the words, “Don’t tread on” and a snake, the iconography of American revolutionaries in the War of Independence in 1776. The militiaman is no lawman: he keeps her purse, and knocks her unconscious when she protests. Randall later returns with friends. “Where the fuck did she get off to? You don’t see trim like that around here.” Emma is saved from gang rape by a young man named Nestor. This character’s motivations in intervening in her plight are initially unclear, but Nestor is apparently well-meaning as he guides Emma into an abandoned tenement. A passer-by is intimidated by Randall into giving up the location of the two to the militiamen, and they enter the tenement. Nestor ambushes one militiaman named Jenkins, slashing him in the face and then smashing in his skull. Nestor and Emma stick to back alleys and reach an ally, a well-prepared survivalist named Sheppard.

Some of Nestor’s background comes out in dialogue between Nestor, Sheppard, and Emma. It evolves that Nestor intervened in Emma’s plight not because of anything to do with Emma, but because, as Sheppard describes it, “Let’s just say this isn’t the first time… that Nes has tangled with authority figures.” Nestor was part of a group called the Left Hand Path, which went to Washington DC and stormed the US Senate. The Left Hand Path hanged one hundred and five politicians, including the President and Vice-President of the United States, in a purge of ultra-conservative Federal leadership carried out by grim-faced citizens. Nestor’s father was a farmer in Idaho: “My dad always used to recite a quote to me when I was younger…Anytime he’d see some politician carrying out the people’s will by trotting out family values, endless security measures, or anything “anti-anyone-who-isn’t-a-white-Christian”, he’d say, “When anyone is being beaten with a stick, they aren’t much happier if it’s called “the people’s stick.”” It is a savage critique of neo-conservative politics.

The militiamen track Nestor and Emma to Sheppard’s lair. “Get in there! Kill them! Bring me the girl!” roars Randall. The three escape through a back door, but not before Sheppard takes great delight in killing two of the militiamen and shooting Randall in the leg. “Don’t try and pull any hero bullshit,” says Nestor to Sheppard when he lags behind. “Hero? You got it all wrong, boy,” replies Sheppard. “There is just something… that I’ve always wanted to do.” The response is placed in dialogue boxes over a series of panels whereby Sheppard uses a shotgun on a militiaman’s abdomen. Guts, blood and intestines are laid out in parallel tracks in a widescreen panel. The intense anti-fascist tone is very reminiscent of the language of the Soviet Union’s and the French resistance in response to Nazi invasion. Key words like “Himmler”, “goosesteppers” and “brown shirts” are used in dialogue to make it clear that the flag-wearing militia are regarded as Nazis, notwithstanding the 1776 American revolutionary symbolism of Randall’s cap.

The three take refuge in the sewers of New York, and decide to make for Toronto. But the sewerage system is unexpectedly under the reign of a warlord named El Hefe, a tattooed ideologue who calls his dominion “the New Society.” It is a commune featuring hydroponic farms, metal works, and a flat hierarchy. El Hefe gives the three a choice: stay and join the New Society, or be blinded so as to not be able to lead others to the New Society’s location. We usually have no issue in revealing spoilers, but in this instance, we feel compelled to leave the dramatic conclusion to the reader.

There are some nice touches in this comic. “Am I really in the presence of a modern day Okie?” says Nestor, mocking Emma. This is a reference North Americans will understand with an eye to history. During a series of dust storms lasting for the years in and around 1934, 1936, and 1939, farmers from Oklahoma and surrounding states in the United States were forced to relocate as the area was reduced to what was called the Dust Bowl. California was the usual destination. Such was the impact of the exodus upon California, and so unwelcome were the “Okies”, that the government of California in essence barricaded the border to economic refugees from Oklahoma and other rural states. These interlopers were easily identifiable through their overloaded vehicles. Emma is similarly an economic refugee, naively making her way to New York in hope of a better life, only to find there is no hope.

Assuming the protagonists reach Canada, it will be interesting to see how Mr Henderson portrays the country and its border security.

This is a title which would have a very uneasy reception in the United States. It could never have been published by a major US publisher. This title is an ideal example of why a strong, independent comic book industry is so valuable, and why the World Comic Book Review so ardently supports independent comics. Tales can be told by independent publishers that would not be at all contemplated by corporate publishers.

Although set in the United States, Our War is a Canadian story. It is a protest about the increasingly divergent cultural values between the two geographically integrated nations. It is analogous to that type of life intervention which can only be carried out by a brother or sister, by that singular family member who is close enough to the out-of-control sibling to care enough to speak out, and yet be brutal about the truth.

And finally, good science fiction is about believable extrapolation. This title is a terrifying, violent, excellently plotted glimpse into an American future to be desperately avoided. The vision is bleak and entirely believable. We cannot find flaw with it.