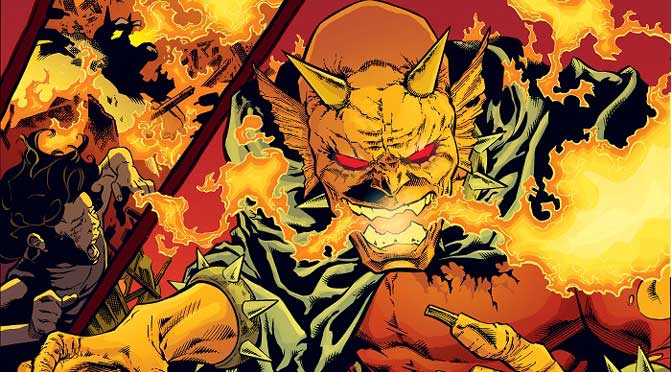 The Demon: Hell is Earth is a new comic book series from American publisher DC Comics. It focuses on the character Etrigan the Demon which, while a relatively popular B-level character, is most notable for trying to run for president. That black comedy was contained in a 1992 comic book storyline and featured a campaign, written by Dwayne McDuffie, with uncanny similarities to President Donald Trump’s antics during the 2016 United States Presidential election (a resemblance we have previously commented upon). The Demon is a story about a creature from hell called Etrigan, who occupies the body of a human called Jason Blood in a variation of the Jekyll and Hyde motif. The character was created by American comic book auteur Jack Kirby in 1972, following an editorial directive to create a title which was “something a bit demonic”. Etrigan is yellow, breathes fire, and typically speaks in rhyming verse. The character is not always altruistic. As noted by critic Sean Guynes-Vishniac:

“Despite its pulp inclinations, The Demon is an intelligent distillation of the Gothic tradition, its masterworks, central social concerns, and major literary motifs – illustrated with astounding virtuosity in Kirby’s sublime late-period style. Moreover, Kirby’s lifelong trade in superhero comics influenced his generically unique vision of the Gothic in The Demon, bringing to the series both a penchant for the melodrama and the continuity-driven fervor of Marvel’s ‘60s comics. As a result, The Demon had a significant impact in the DC Universe. Etrigan and Blood received a limited series in the ‘80s (Vol. 2, Jan-Apr 1987) and a 58-issue series in the early ‘90s (Vol. 3, Jul 1990-May 1995), and were frequent guests in horror comics and in comics set in Gotham City, Blood’s home. Etrigan (sans Blood) was also the central figure of Day of Judgment (Nov 1999), the DC weekly mini-series that turned former Green Lantern Hal Jordan into the Spectre, God’s divine vengeance incarnate. More recently, Blood and Etrigan were feature characters of Demon Knights (23 issues, Nov 2011-Oct 2013), part of DC Comics’ 2011 “New 52” re-launch.”

The Demon: Hell is Earth #1 drops readers in the middle of a dream, or rather, a nightmare experienced by Jason Blood, who is now living alone in the Death Valley region of Nevada in the United States. The nightmare set out is in first person perspective. Blood meets a little girl asking for help, before she is burned alive. Upon waking up, Jason is chided by Etrigan, who claims disappointment due to the dream ending before he was able to eat the little girl.

Through Etrigan and Jason’s internal conversation, it is revealed that Jason has turned into a recluse who has avoided human contact and the general populace, while using the mechanism of alcohol to keep the Demon Etrigan from manifesting.

The comic then shifts momentarily to another character – the sorceress Madame Xanadu. This is another character from the 1970s (1978, to be exact). Ordinarily depicted as resident in a shop in Greenwich Village in New York, here the character rides a motorbike and wears biker’s clothes (while still wearing her trade mark tiara). She is seemingly looking for something that the story has not disclosed yet. Madame Xanadu runs into a group of men who quickly learn the consequences of haranguing a powerful and immortal sorceress.

From Xanadu’s introduction into the story, the plot shifts again. We see a family on vacation, including the young girl from Blood’s dream. All of these different scenes are stitched together to coincide with the explosion of a nuclear missile n the Californian desert. It evolves that the nuclear bomb was intentionally diverted to the area by a military official who is worshipping an as-of-yet unnamed mastermind, with the goal of opening a hole straight into hell. The little girl’s family undergo horrible transformations as a consequence of exposure to the bomb and to the malign influences of hell, and try to eat her, but she is saved just in time by the demon Etrigan. As it turns out that transforming into the demon anti-hero is Blood’s only way of protecting himself from the nuclear fallout (Blood can easily transform or summon Etrigan through the phrase “Gone! Gone! O’form of Man, Rise, the Demon Etrigan!)

This first issue of The Demon: Hell is Earth is entirely a plot springboard. Readers should not expect too much innovation when it comes to storytelling. A villain of some description is trying to open a gateway to hell, and that once again, the demon Etrigan will save the day not out of altruism, but through some self-serving motivation (such as self-preservation, or just pure mischief). This is the typical modus operandi of the character and writer Andre Constant keeps The Demon true to form in that regard.

Indeed, Mr Constant has taken the character well away from Mr McDuffie’s humorous take, and back to Mr Kirby’s original vision of horror. The wildcards in the plot, and the reason why we are interested in following the next few issues, is the addition of Madame Xanadu and the little girl. The former character’s inclusion in the title not a surprise, as she is usually part of many storylines that involve the supernatural and magic in DC, and continuity-wise runs in the same circles as Etrigan. The latter, on the other hand, is clearly being set up for a very important role in the plot given her appearance in Jason Blood’s prophetic visions. We are not holding out for a particularly novel or shocking twist, but Hell is Earth so far managed to set up a decent mystery – one that warrants further reading.