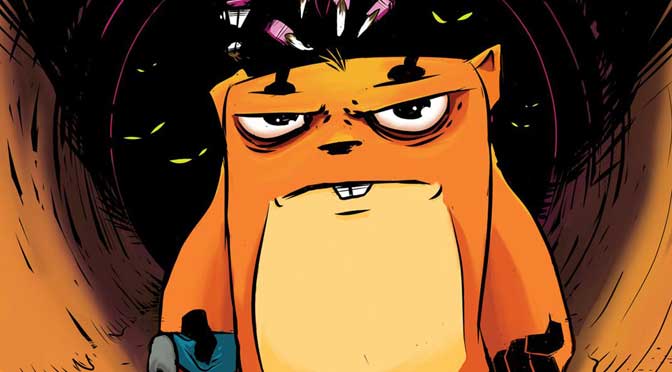 If the basis of absurdity is surprise, then the muddling of anthropomorphic characters with stoner swearing should startle an adult audience into laughter. “Henry the Cantankerous Hamster” #1 was published in October 2015, and so would normally trigger our refusal to review comics which are not new (excusing only comics which have recently been translated into English). But we felt obliged to make an exception for this particular independent publication, in the hope that our positive critique will procure a second issue.

Henry is a hamster. He lives in an underground sewer, but more specifically, in a village called Hooch Springs. It is inhabited of drunken mice, sloshed on a nearby lake of beer. Henry does not seem pleased by either his surrounds nor his company, but notes that it is “a good place to hide”. One mouse is so drunk as to think a potato is his car. “I’m talking 400 horsepower of starchy mayhem!” The mouse asks Henry to fix the potato, adamant that a potato is a car. “Potatoes aren’t cars,” says Henry, and the drunk mouse replies, “Not with that attitude they aren’t!”

Henry’s skill set, as it evolves, is advanced mechanics. He wears something which looks like an exoskeleton. He very much keeps to himself.

The tension in the story arises when the mouse town is invaded by rats, under the banner of the Rat King. The mice are not especially familiar with the concept of monarchies. Any pretence to “Game of Thrones” inspired medieval villainy by the rats is squashed by a Monty Python-esque argument amongst the mice to the effect that if there is a Rat King, then there should be a Mouse King, and further, do kings get appointed by elections, or by other means? Logic in the debate is unnecessary. A comparison with the peasants’ scene from the motion picture Monty Python and the Holy Grail is instructive:

ARTHUR: I am your king!
WOMAN: Well, I didn’t vote for you.
ARTHUR: You don’t vote for kings.
WOMAN: Well, ‘ow did you become king then?
ARTHUR: The Lady of the Lake, [angels sing] her arm clad in the purest shimmering samite, held aloft Excalibur from the bosom of the water signifying by Divine Providence that I, Arthur, was to carry Excalibur. [singing stops] That is why I am your king!
DENNIS: Listen — strange women lying in ponds distributing swords is no basis for a system of government. Supreme executive power derives from a mandate from the masses, not from some farcical aquatic ceremony.
ARTHUR: Be quiet!

And in the script from this title, the writer, Ryan Salazar, takes this and runs with it long and deep:

The incessant chatter between the mice drives the rat general to distraction. But Mouse #1 (we learn his name is John) sells Henry out, and Henry finds himself in a confrontation with the rats. Henry deals with the threat channelling action motion picture hero Clint Eastwood: “I crap pellets bigger than you!” Henry is full of grit.

And during the ensuing fight, when the rat general unexpectedly transforms into something many eyes with scissor jaws, Henry calls in the assistance of his machines, including an armoured suit called “Tumbles” (or perhaps “Vanna” – this is a little unclear). Henry gives the rat general both the finger and a face full of napalm, and the rat makes the mistake of jumping into the lake. Full of alcohol, the lake explodes, presumably killing the rat general. Henry gets out of town. A mouse, propelled into the air and on a figurative and literally downer, yells, “The fuck was that?”

The title is littered with inspired comedic lines. “You should see Dr Stabowitz. But don’t let him operate on you. Doc never knows when to stop. Isn’t that right, Steve?” And against the wall, a weary mouse missing both legs lifts a hand. “Right here, Zeke…” It takes skill to be unique with comedic material and Mr Salazar does a fine job.

Creator Jason Long includes a dedication at the beginning of his comic. “Thanks mom and dad for thinking my stupid ideas are funny.” For what it is worth, like Jason’s mom and dad, we think they are funny , too. We look forward to a second issue, but further, look forward to again seeing Mr Long’s name in association with comedy, in whichever medium.