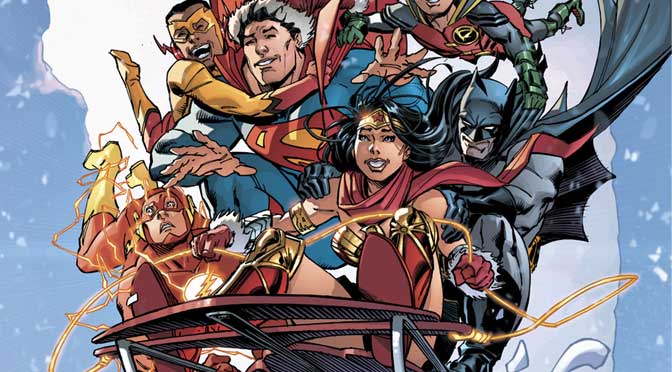 ‘Tis the season. DC Universe Holiday Special 2017 is a 96-page comic book from American publisher DC Comics. It serves as a holiday special featuring many of its mainstream superhero properties. It celebrates the Christmas holiday season much in the same way DC House of Horror celebrated Halloween. A compendium of this nature is a nostalgic reminder of DC Comics’ titles of a bygone age, such as 1980s’ Superstar Holiday Special:

As gifts go, DC Comics have been generous when measured by quantity. There are a remarkable eleven short stories contained in DC Universe Holiday Special 2017, each one focusing on a DC comic superhero or superteam, and all sharing Christmas as the common theme. These short stories are framed by the story titled “The Reminder,” which focuses on the mage John Constantine and Superman’s alter ego Clark Kent, as they spend Christmas eve at Metropolis’ Ace O’ Clubs pub, which is run by the recurring character Bibbo Bibowski.

“The Reminder” is one of the best short stories in this anthology, showing a little bit of vulnerability in a character which is depicted as being able to survive a vacation in the center of a burning sun. It reveals that Clark Kent visits Ace O’ Clubs every Christmas, each time expressing dissatisfaction over Superman’s inability to solve everything (and internally wondering whether the struggle is worth it). This dissatisfaction is encouraged by the curmudgeon Constantine but contested by Bibbo, who has always been characterized as one of Superman’s biggest fans.

This disagreement is a segue into the other stories, with Bibbo telling these stories to Clark as a way of either cheering him up, or defending Superman. The approach of telling stories in a pub has roots in Irish culture with pub lock-ins, or perhaps even further with the idea of storytelling amongst strangers during a stopover in Geoffrey Chaucer’s Canterbury Tales (c. 1387). The most recent examples in a motion picture is Quentin Tarantino’s movie, The Hateful Eight in which eight strangers seek refuge at a stagecoach stopover, escaping a blizzard. The concept has been adopted many times in comic books, perhaps most famously in the World’s End story arc in Neil Gaiman’s The Sandman (1994), but also very prominently with Munden’s Bar in John Ostrander’s Grimjack. And witnessing Clark Kent in a bar is an ironic nod to the parodic Clark’s Bar, first featuring in Alan Moore’s work on WildC.A.T.S from 1995-1997 for Image Comics. Here is an example:

But in this title, it is clumsily executed, since there is the blank question of how many of the stories relate to Clark’s despair over his success as Superman. The reader will also be left to wonder how Bibbo knew of the stories. The character does not even know that he is talking to the alter ego of Superman, so how can he be privy to personal stories involving the Teen Titans, the Swamp Thing, and especially The Batman, who is probably the most secretive individual in DC’s roster of superhero properties? Perhaps this is too much to be concerned with, given the festive theme of the comic.

On the remaining stories, it is normal for comic book anthologies, especially one written by different authors, to have uneven quality. But unlike most Christmas specials that contain stories that are lighthearted and easily digested even by kids, DC Universe Holiday Special 2017 does not shy away from mature topic. And it is all the better for it. The best example in the anthology features the war-themed property Sgt. Rock, in a story dealing with a wounded World War II U.S. soldier, Private Hammerman. The soldier is stranded alone in the cold with a German prisoner that Hammerman is tasked to transport to a prisoner-of-war camp. Wounded and possibly dying, the two soldiers spend a week waiting for someone to find them in the snow. The situation is further complicated by the revelation that Hammerman is Jewish. The story gets very dark, leading to a dour conclusion that readers would not normally expect from a Holiday short story.

On the other end of the quality spectrum is “Solstice,” which features the Batman and Wonder Woman. Each use clichéd internal monologue to harp on about their respective approaches to heroism. It hammers home with a dull thud the point about how one of them works “in the light” while the other one works “in the dark.” The juxtaposition is hardly novel, and here is not at all interesting.

The rest of the stories fall somewhere in the middle of these two extremes in quality. “Twas the Night Before Christmas” starts off strong but falls short. It features an interesting plot about a mugger (with the prodding of his grandmother’s ghost) about to kill two wealthy homeowners. The motivation is revenge. The ghost died because she and the then-young mugger were denied shelter during a heavy snowfall, by someone who is presumably the father of the two wealthy homeowners. The story could have gone somewhere interesting, but was wrapped up with an enormous anticlimax. The omnipresent Batman appears and karate-chops the gun off the mugger’s hand. The mugger tells his dead grandmother to go away. And there it ends, like candy cane dissolving in the mouth of a toddler.

Superman does get the best stories in this anthology, as it also features one story that shows him dealing with a non-violent robber – a brilliant engineer who was unceremoniously laid off from work, who then decided to invent a fast, safe jetpack that he subsequently used in robbing a bank without hurting anyone.

Of course, the criminal was easily apprehended by a superhero who can fly at supersonic speeds. But Superman’s approach is refreshing: upon finding out that the criminal was non-violent and had potential, he made a deal. The man is to be surrendered to the MCPD and must serve time for his crime, but Superman will hang on to the jetpack and will help him patent it for when he gets released. It ensures that the man can use his skill to earn an honest living instead of using it to commit crime. It is a very progressive approach to crime fighting that contains a message about redemption, fitting in well with the holiday season. (Superman is not a patent lawyer, and is clearly not aware that self-disclosure of a an invention prior to filing a patent ordinarily invalidates the invention’s patentability. Using the invention to commit a crime is an interesting method of commercialisation of an invention, but would probably be considered a premature disclosure. Never mind.)

The last few pages of the anthology closes the circle, returning to Bibbo, Superman, and Constantine. Clark’s faith is naturally restored and after a few snarky exchanges with Constantine, Clark manages to convince Constantine to spend the rest of the Christmas eve with the Kent family.

DC Universe Holiday Special 2017 is a worthwhile read, despite the uneven quality. The cumulative quality of the stories makes it stand out from other throwaway holiday specials. We recommend getting this if you need something to read during the holiday downtime. Merry Christmas.