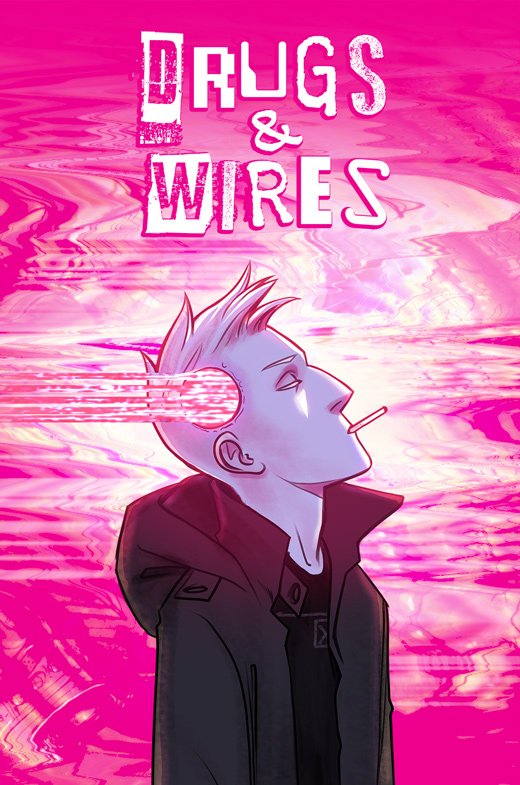 Drugs and Wires: Down in a Hole (volume 1)
September 2018 (collection)
Writer: Mary Safro

“Reactivating it’s out of the question, though. Not until I find some way to scrub the worm.”“So the thing’s still sitting in your ‘ware, huh. Hey, why don’t you come down to my shop tomorrow? I’ll fire up the ol’ angle grinder and take a look inside you.”

World Comic Book Review has frequently written about comics which have planted the flag in the cyberpunk science fiction sub-genre. But we have never sought to give “cyberpunk” any definition. We have been saved that task by the Massachusetts Institute of Technology and its online page http://web.mit.edu/m-i-t/science_fiction/jenkins/jenkins_5.html devoted to the science fiction cyberpunk genre:

“The cyberpunk movement in American science fiction first took shape in the early 1980s in the fiction of such figures as Bruce Sterling, William Gibson, Rudy Rucker, Pat Cadigan, and James Patrick Kelly. However different in other respects, these writers were preoccupied by the changing place of media in American society, especially in the wake of the initial phases of the “digital revolution”…. Cyberpunk’s protagonists are hackers, rockers, and other cultural rebels, clinging to a cult of individualism in a culture characterized by corporate control and mass conformity. These protagonists are adept at appropriating the materials of popular culture and making them speak to alternative needs and interests; they also know how to tap into the vast digital database to access information about corporations and their secret conspiracies, or to spread resistant messages despite powerful mechanisms of top-down control….This theme of personal technology, of the fusion of machine and body, runs through cyberpunk fiction, which is often framed from the bottom-up perspective of consumers as against the knowing, elite perspective of scientists, engineers, and inventors…. cyberpunks built upon the images of corporate-control over culture which surfaced in the works of the Futurians in the 1950s and added the bizarre twists associated with the New Wave writers of the 1960s. Not since the origins of the genre had science fiction exploded with so many fresh ideas, which rushed forth in a breathless prose, and burst upon the page in vivid sensory details. This was a future one could not only see but touch, smell, hear, and taste, not an empty future but one full of life and brimming with contradictions and conflicts.

Drugs and Wires is an ardent, yearning homage to 1980s cyberpunk. Perspectives what the future might be has changed substantially since the 1980s, because, it is trite to say, we are living in a tributary of the future which was glimpsed from the distance, but incapable of being mapped until we were waist-deep in the water. Visions on what information technology, for example, may look like in the future have inevitably shifted, as we have shifted from hardware to software to ephemeral cloudware. Drugs and Wires, an independent science fiction story by writer Mary Safro, takes us back an age where information technology is made of chunky plastic, cracked, sweat-stained, and smells of vomit.

A recent discussion on cyberpunk in The Guardian concluded that cyberpunk is too narrow a vision of the future:

“It is alarming that we are starting to accept the dystopian features of cyberpunk as an inevitable part of our future. The neoliberal milieu, the crucible in which cyberpunk was formed, is crumbling. Cyberpunk’s stasis leaves little room to map the emerging nationalisms, fascisms, political populisms and revitalised leftist movements seeking to challenge political and economic orthodoxy. New potential futures are finally emerging. It may be time for cyberpunk to evolve or die.”

A nonsense, and in any event Drugs and Wires commendably does neither. Instead, it perseveres. Cyberpunk on one level is about survival rather than change, and Drugs and Wires raises a street wise eyebrow at the reader, hands in pockets, like William Gibson’s Panther Modern. The motion pictures of the 1980s were excellent and the books of the 1980s were outstanding, and Drugs and Wires, set in an alternate 1995,mainlines the genre ethic without restraint.
The indicia of cyberpunk are scattered throughout the book:

1. The Soviet technology brutalism. Steve Jobs, the founder of the US technology giant Apple, was obsessed with the aesthetics of Apple’s products. But Soviet Russia has a different, practical, street-wise sense of technology which pervades the entire culture – technology solutions can be filthy, dangerous, and horrible, but it does not especially matter if it works. The characters are close enough to Russian (from a fictional Warsaw Bloc ally called Stradania), and sure enough the technology used by the characters is advanced but totally devoid of finesse. The lead character, a dubious delivery man and gamer named Danilych, for example, has a large plastic fixture on the side of his skull which looks like a cheap bath plug. It conveys the impression of being half-baked and suicidal – having a hole to your brain for the benefit of technology and covering it with a plastic cap tells us that Danilych has done this on the cheap, but it nonetheless does the job. (A female bouncer describes the machine in his head as a “classic”: Danilych cannot afford the newer, better version of skull-tech.) And, the mystery of the plot, Danilych has been infected with a worm, through which he occasionally sees ghosts. Anti-virus software does not seem to be high on anyone’s priorities list, even for software integrated into their brains.

Russia and its neighbours are, as a generalisation, religiously conservative countries, and Ms Safro picks up on what would be an inevitable distrust of cyborg enhancement. Being a hooked-in cyborg is not just illegal, but is also a basis for xenophobia. At one stage during a delivery, Danilych is chased down the street by a rural lynch mob. The angry country folk have by accident seen his modified skull.
2. Young people with too much time on their hands. Decadence and youth is not a new concept, but decadence, youth and high technology is solidly cyberpunk. Drug use – exotic, deadly drug use-  is normalised in cyberpunk society. When Danilych attends his own wake, his friends thinking that he is dead, the wake organiser defends Danilych’s epitaph: “You didn’t really give us much to work with, did you? “Here’s to Dan. He loves drugs and hates people, and now he’s dead.””
The mystery underpinning the plot – the software worm and the fact that dead gamers unexpectedly turn up alive but in hiding – is engaging. But the paramount value of this comic is that it is genuinely funny, in a very dark and grubby sort of way.

Here are some other examples, of many:
1. Danilych’s friend Lin is a black market surgeon who repairs cyborgs. She is entirely too cavalier. “Ever perform implant surgery when your blood sugar’s crashing?” Lin asks Danilych as she cracks open chopsticks with bloodied hands, her patient laying in front of her, awake, with his chest opened up. “Last time I started operating on an empty stomach, we whacked off the wrong limb… three times.” Lin is otherwise a terrible friend:

2. The bad guys are inevitably an evil corporation, called (amusingly) Hope-Fokker Capital Investments. Hope-Fokker hold a bake-off amongst factory employees, each hoping to win and keep their jobs in the midst of mass closures. They learn that the bake-off actually is a little joke by management.

3. Danilych is busted at work for possession of opiates, and is fixed with a sobriety implant. It is akin to having a nagging, annoying mother embedded into your forearm.
Volume One of Drugs and Wires (entitled “Down in a Hole”) is collected in a trade paperback available on Patreon. Ms Safro and her artist partner Io Black maintain a website, www.drugsandwires.fail and publish a new page of the next chapter to this story every Wednesday. Drugs and Wires should be with Dark Horse Comics or a similar publisher with a global reach, so as to better help fans of cyberpunk locate this excellent title.