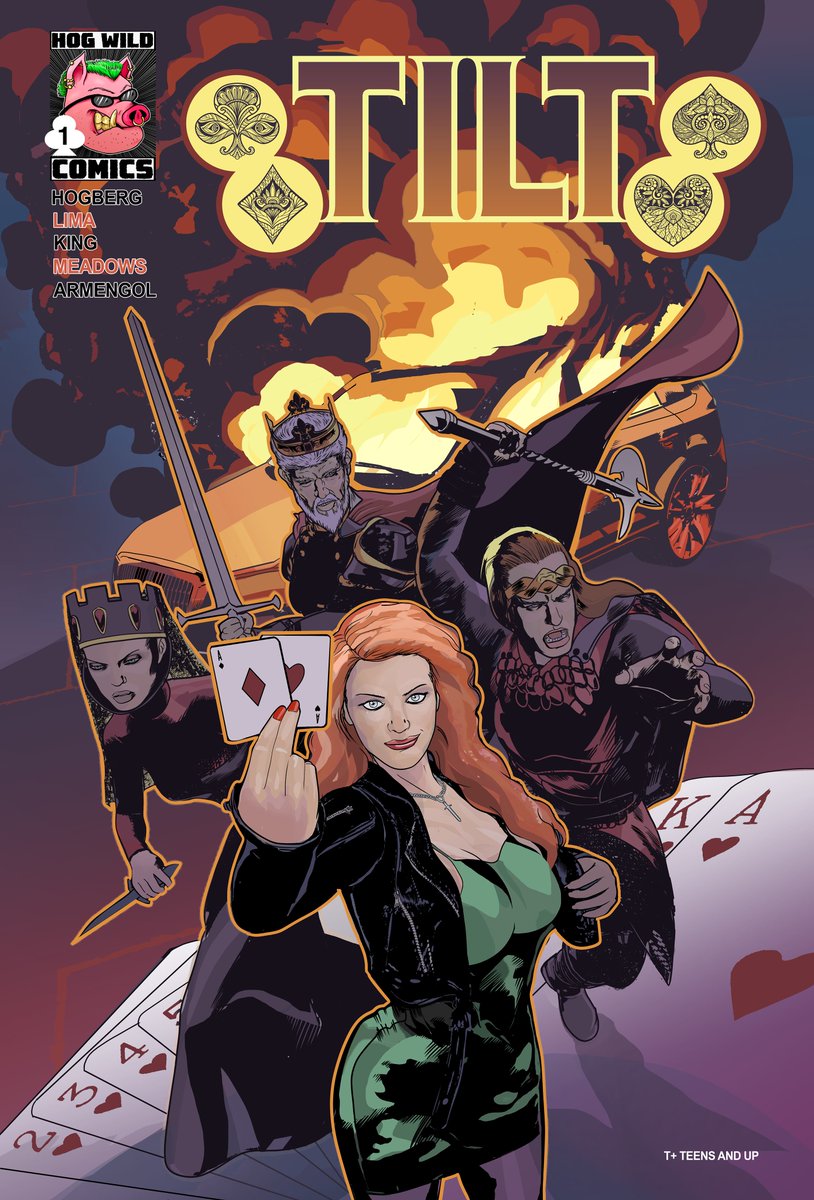 Using playing cards as characters in comics is not a new concept. Vertigo Comics’ Lucifer featured the Basanos, a calculating, terrifying manifestation of tarot cards, which, amongst other horrible things, rape a supporting character called Jill Presto. Less confronting is DC Comics’ superhero title Justice League has repeatedly featured a villainous crew called The Royal Flush Gang, which first appeared in 1966. The Royal Flush Gang for the most part used goofy card-based weapons and other gimmicks.

in this title, Tilt, Jennifer Polar is a cop’s daughter. Her father was an undercover policeman, who had his cover blown and was killed by the goons of mob boss Johnny Ricca. The spirit of Jennifer’s dead father, Larry, enters into a deal with an arrogant supernatural figure, providing Jennifer was both unearthly protection and a unique opportunity to get vengeance upon the mob.

Jennifer is a very well-crafted character. She struggles with the idea of vengeance and is goaded into it by an appearance on television by Ricca, who boasts of planning his birthday. When a mobster is brutally decapitated, she is so frightened that she urinates herself. And when she dresses up to seduce a mobster, she is so scared she throws up in a toilet. This is not a typical action hero. It is instead an entirely believable character who is in over her head. On the first page of the title, Mr Hogberg explains the etymology to the comic’s title: ‘Tilt: A mental state in poker where emotion dictates your play instead of logic and reason.” Jennifer is suffering from tilt by not doing what any reasonable person would do – hide – but instead gambles without understanding the rules nor the value of the bet. Jennifer’s emotional make-up is extremely well portrayed.

One of the clever things that the creative team have done is to borrow a page from the American superhero playbook of writers like Grant Morrison (the Bulleteer in the Seven Soldiers of Victory) and Jim Lee and Brandon Choi (Fairchild in Gen13). Jennifer is a voluptuous redhead (just like the Bulleteer and Fairchild). But, like the Bulleteer and Fairchild, she is not comfortable in tight or revealing clothing, and Mr Hogberg is careful not to play up her sexuality through the dialogue or characterisation. (She does have sex, but on her terms – more on this shortly.) This enables the creative team to have a lead character who is easy on the eyes – visually crafted to appeal to the male demographic who might read a title like this – but guileless so as to not repel a female readership. Gail Simone mastered this balancing act with DC Comics’ Birds of Prey – a team of very attractive female characters, wearing revealing clothing, but who acted like ordinary human beings and who were even a little uncomfortable with their costumes choices. Here, the creative team also successfully walk that tightrope.

As to the sex scene, it is a little odd. The main character finds herself in bed with one of the cards. It is a long way from Jill Presto’s horror, but we have that odd situation of a protagonist commanding a set of magical creatures, only to find herself in bed with one of them. Worse, the other playing cards, sitting in some sort of otherworldly conference centre (called “the Card Room”), get a view of the tryst. This is an awkward analogy, but the scene is oddly akin to having sex with a personified hammer while all the other screwdrivers and spammers look on. If the creative team were endeavouring to trigger a unique emotional response within their audience, our view is that they achieved their goal.

The only jarring aspect of the story is a small one. The characters which appear on playing cards have a European medieval background, and as they typically portrayed, wield axes and clubs. When in the beginning the cards bludgeon and slice up her opponents, the gore seems authentic. A medieval warrior class is going to be vicious and bloody. Yet at one stage Jennifer throws down two aces, and these somehow transform into rocket launches, which are enthusiastically used to destroy a mobster’s car. We think that the royal suite would have been better off depicted as unfamiliar or even scornful of with modern weapons. But it is a small criticism.

A word on Mr Lima’s art. It is very reminiscent of the art of Pia Guerra (most famous, perhaps, for her work on Y: The Last Man for Vertigo Comics) and also of veteran artist Tom Grummet. Mr Lima does an excellent job of buttressing the characterisation through facial expressions, especially Jennifer’s nervousness and terror, and the delighted violence of the playing cards as they wade through the mobsters.

Overall, we enjoyed this title. It could use some polish but the concept is solid, and, as we have repeatedly noted, the characterisation is excellent. We look forward to seeing how the story unfolds.

The second issue of Tilt is presently part of an Indiegogo campaign: https://www.indiegogo.com/projects/tilt-part-2#/