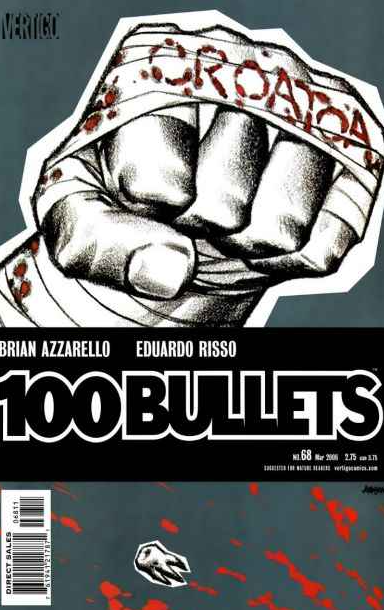 As ever, this review contains spoilers. It seems an odd thing to have to warn readers that this review contains insights into critical plot developments and twists, given the title concluded publication twelve years ago. Such is the compelling nature of the extended chess game that is Brian Azzarello’s and Eduardo Risso’s 100 Bullets that, breaking away from our usual glee about the revelation of spoilers, we do not wish to ruin it for anyone belatedly seeking out the title.

This review is the first of a triptych of retrospectives on 100 Bullets. Much has been made in reviews of the quintessentially noir nature of the acclaimed, award-winning crime series. This particular review looks at something a bit different – the critical plot device of the induced amnesia of some of the key characters.

“…All the law could do was shake its finger.”― Mickey Spillane

100 Bullets consists of a myriad of crime-orientated vignettes, woven into a greater whole. The overarching plot however is more espionage-themed than crime. Agent Graves is the bleak leader of a group known as the Minutemen, the enforcers for – and of – a highly secretive and powerful society known as the Trust. (Graves is based on US actor Lee Marvin, according to Mr Azzarello’s interview with Wired magazine in 2009 – see https://www.wired.com/2009/04/intro/ .)

(We will talk much more about the Trust in the second of our series of reviews of 100 Bullets.)

The Minutemen’s mission, for centuries, is to protect the thirteen families comprising the Trust. Within the confines of what we know from the title, those threats almost always play out as the internal conflicts between the Trust families. The Minutemen are brutal in their dealings with transgressions. As John Galati of Comic Book Alliance https://www.comicbookherald.com/some-careworn-hustlers-tomorrow-100-bullets-omnibus-review/ wonderfully put it, the Minutemen are “just preternaturally good at savaging other human beings.”

It is hard to say whether it was Graves’ adherence to the mission, or the manner in which the Minutemen carried out their final task – setting fire to a kidnapped member of the Trust – which caused the Minutemen to go into hiding. Graves has a haughty view:

But the repeated emphasis upon the key event – dragging the hapless man out of the boot of a car with a hood over his head, the Minutemen standing in shadow coolly discussing what the murder might mean for each of them, the petrol being poured, the fire being lit – makes us think that the sheer villainy involved in the murder might have enraged the Trust.

The Minutemen’s disappearance involved Graves putting most of, but not all, of the Minutemen into a state of “deactivation”. This involved was was apparently hypnotic conditioning, with varying levels of depth. Some, such as Milo “The Bastard” Garret, forget almost everything about his life, and did not even question the absence of memory. Others had only their time as Minutemen erased. A keyword, “Croatoa” snapped them out of the induced amnesia. The “Croatoa effect” is rendered plain by Mr Risso’s art: rounded eyes, mouth agape, shoulders slack, as memories wash back. This keyword manifests itself in various ways.

Revealed in issue 50,  Victor “The Rain” Ray was the first Minuteman reactivated by Agent Graves. Ray’s face is lit in what we later learn is uncharacteristic shock.

Cole “The Wolf” Burns was the first Minuteman reactivated within the chronology of the issues of the series. Graves deceived a man who was going to kill Burns into saying “Croatoa”. The magic word shattered Burns out of his helplessness.

Garret was the third Minuteman reactivated when he read the word “Croatoa” on a painting while engaged in detective work for a Trust senior member and femme fatale, Megan Dietrich. The memories only slowly return for Garret, who seems to want to fight them off: unhappy with what he was, he tricks rogue Minuteman Lono into killing him.

The leader (and most likeable) of the Minutemen, Wylie “The Point Man” Times was the fourth Minuteman reactivated: Agent Graves primes a (doomed) New Orleans trumpet player to tell Times he had been playing a tune entitled “Blue Day for Croatoa”.

Jack “The Monster” Daws was the fifth Minuteman activated, during a bareknuckle boxing match with Lono. Lono was given the keyword by a dying Shepherd.

Lono had tattooed the word “Croatoa” on his abdomen, stupifying Daw (but not sufficiently to enable Lono to win the fight).

Remi “The Saint” Rome was the last Minuteman awoken when Graves arranged for the word “Croatoa” to be written in the snow on back of Rome’s car.

Strangely, as far as we can see on a reasonably in-depth Google search, no one has thought to write about this key aspect of 100 Bullets. Induced amnesia is common enough in American superhero comic books as a plot device, especially around time travel. Marvel Comics’ Avengers and X-Men characters are constantly beset by amnesia when they travel through time. This is to explain how characters from the past who have travelled to and learn about the future do not act upon their knowledge. In Warren Ellis’ and John Cassidy’s Planetary, the main character, Elijah Snow, is for years rendered vague and useless after having had his memories blocked by his nemesis, Randall Dowling. The superhero title Identity Crisis, written by Brad Meltzer and with art by Rags Morales, involved the use, by members of the Justice League, of memory blocks upon a variety of villains and, remarkably, also Batman. (There is another parallel between Identity Crisis and 100 Bullets. Identity Crisis was published in 2004, but even with the passage of years, of all American mainstream comic books, remains the most pointless and salacious in its depiction of rape. 100 Bullets on the other hand contains a horrible rape committed by Lono against a woman named Sophie in issue 19. The circle on this is closed in issue 85 when Sophie, in a position of being able to kill Lono, overcomes her desire for vengeance and proves she is the better person.)

Induced amnesia is something we have not otherwise seen in a crime comic. Perhaps the closest parallel is Robert Ludlum’s 1980 spy novel, The Bourne Identity.

The invoked amnesia was not confined to the initial line-up of the Minutemen. Two other characters, Loop and Dizzy, have very formidable martial arts skills but do not remember how they acquired them. The only thing the two have in common is that they both have done time in jail. When this training was achieved, and by what means, is not explained in 100 Bullets: indeed, both instances are breezed over by Mr Azzarello without being mentioned again. It is left to the reader to divine why (presumably) Graves arranged this, perhaps as some sort of seeding exercise of future suitable Minutemen. The alternative explanation is a more practical one: this might have been a plot point abandoned by Mr Azzarello when it did not fit into the greater narrative.

Graves is clearly designed by Mr Azzarello and Mr Risso to have a strong sense of “spook” – the stage presence of an intelligence field agent. Was he ever actually a government agent? Of all of the highly capable characters featured in the title, only the Minutemen’s handler, Mr Shepherd, is shown to have done a stint in the army. There is no express suggestion as to whether or not Graves might have been in the Central Intelligence Agency or some other spy outfit.

How could Graves induce amnesia in key characters? It is not something we think which could be done with a swinging pocket watch. MK Ultra was a Central Intelligence Agency project which ran from 1963 to 1974. The project was investigated in 1977 by the US Congress’ Joint Select Committee on Intelligence. A copy of the proceedings can be found here: https://www.nytimes.com/packages/pdf/national/13inmate_ProjectMKULTRA.pdf . The extent of those experiments are lost:

What were the methods used in MK Ultra? They included sleep deprivation, hypnosis, heroin, LSD, provision of exotic pathogens, use of toxins in human tissue, behavioural modification, and enigmatically, “magicians’ art”.

Our working theory is that Graves used something akin to MK Ultra to submerge the identities and personalities of the Minutemen when they needed to be safely hidden away from the wrath of the Trust. Perhaps, in the “lost documentation” of MK Ultra, we might find the Minutemen’s names.

“What do you want me to do, learn to stutter?”― Dashiell Hammett

More fundamentally, why was hiding out with hypnotic memory blocks necessary at all? It does not make sense in the confines of the plot for a number of reasons.

First, neither Graves nor any of the Minutemen are depicted as the types of characters who would run from a fight, and especially one in which they are discharging their duty. Killing a senior member of the Trust was not a novel thing for the Minutemen. By way of example, Times killed Rose, the love of his life, who was a member of the Trust sentenced by Shepherd (and presumably Graves) to die by reason of her conspiracy against another Trust house.

Second, the Minutemen in reality had little to fear from the Trust. Remi Rome, as one example, is shown to effortlessly carve a swathe through the heavily armed private forces of a Trust family. It seems that even the combined gunmen of the Trust would have failed to kill all of the Minutemen.

Third, if the Minutemen did need to hide, why did they need to hide as amnesiacs, vulnerable to attack from the Trust? There is an obvious difference between bugging out, and being unnecessarily exposed.

The answer to all of these questions is more to do with Mr Azzarello’s flourish in plot development rather than some event to be flushed out. 100 Bullets, as we noted above, contains the indicia of a chess game. The initial sequences involve some of the significant players, but for the most part are the movement of pawns. The Minutemen are unveiled to the reader over a very protracted period of time. We want to know who is next. With the beginning of each vignette, we are not sure who or who is not a Minuteman, or even if there will be one within that sub-story – as a new reader, we are ask whether or not a new storyline is part of the subplot of Graves’ delivery of justice, or some new jigsaw piece in the high stakes game between the Minutemen and the Trust?

Some hidden Minutemen were obvious – Jack Daws, for example. But some were not at all. The final Minuteman could easily have been Remi Rome’s capable and responsible brother – but, alas, he is just a pawn in the game, and one who meets a deeply ironic ending. Remi Rome being revealed as a Minuteman is a genuine surprise, as is the revelation of the goofy Times as not just a Minuteman but even more, as their anxious leader.

Tearing off the mask, the repeatedly revelation of a each Minuteman, creates heightened tension. It demonstrates Mr Azzarello’s skills not just as a master of dialogue but as a designer of dramatic effect. Perhaps our conclusion is that there does not need to be a cause for the Croatoa effect at all.