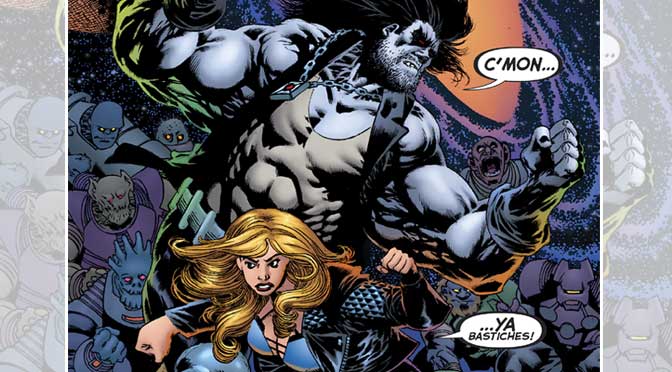 Justice League of America Annual #1 features the Justice League brand in the title, but – unlike the cross-promotional underpinnings of many of the titles published by American comic book company DC Comics titles this year – does not focus on any of the original members that were featured in the 2017 Justice League film (with the exception of the Batman, who is mentioned in passing and shown in a flashback.)

Instead, the Justice League of America’s 2017 annual focuses on the unlikely pairing of the extraterrestrial bounty hunter named Lobo and the character Black Canary. Black Canary has a singular superpower – a “canary cry”. This is a high-pitched scream powerful enough to incapacitate enemies and shatter objects. The pairing of these two characters is odd because Lobo and Black Canary usually feature in tonally contrasting stories. This analysis accepts that there is a spectrum of superhero stories. The high end of the spectrum features cosmic-level, universe-shaking apocalypses. The other end of the spectrum consists of stories dealing with street crimes. Save for ever-present sales magnets like Batman and Wolverine, characters in the superhero genre tend not to drift from one end of the spectrum to the other. Lobo is an antihero who deals with farcical stories set in space, quite deliberately in the style of British comic book publisher 2000AD. (Lobo himself has butted heads with the Justice League and served as their villain in some stories). Black Canary on the other hand is generally considered a street level vigilante who fights thugs, gangsters, and villains that, in the superhero formula, can be defeated by a protagonist with no powers outside of peak human athleticism. Lobo would not be seen in a gritty story about drug dealers in an inner-city ghetto: Black Canary rarely ventures into space and would be very unlikely to be seen battling a world-threatening villain.

Lobo has something of a cult following. As noted by writer Chris Snellgrove on the website Looper:

“If you don’t know Lobo, he’s basically a mashup of Superman and Wolverine: an immortal, unkillable alien that happens to have super senses, a crazy healing factor, and a penchant for beer and cigars…. When [creator Keith] Giffen was asked why the hell Lobo became so popular, he answered, “I have no idea why Lobo took off. I came up with him as an indictment of the Punisher, Wolverine, bad ass hero prototype and somehow he caught on as the high violence poster boy.” For those too young to remember (and those who do remember simply drank the memories away), the ’80s were a major period for the comic book antihero. In some cases, characterization went out the window in favor of berserker rages and goofy catch phrases, such as Wolverine being “the best there is at what he does.”

The story itself is fairly straightforward and representative of a Lobo story’s tendency for ridiculous plot. Lobo, with information provided by Batman, is hunting down an interstellar villain committing genocide against a race of space dolphins. Lobo claims to be fond of dolphins due to their purity. The character’s concerns with space dolphins dates back to Keith Giffen’s work on Justice League #18, in 1989. The image below shows the first example of the character’s preoccupation with dolphins, in what most fans of Lobo would think is entirely out-of-character:

Lobo has coerced Black Canary into assisting him in his adventure. The ridiculous plot may seem weird to new or casual readers. But it is generally par for the course in a Lobo comic which, despite crossing over into DC Comics’ publisher-wide shared continuity, are fundamentally concerned with satire and parody.

To its credit, the story is self-contained and does not require any backreading. Any references to events or characters outside of the comic is explained well in the dialogue itself (though the comic provides helpful citations for back issues.) There are no requirements outside of basic familiarity with the characters.

The comic makes full use of the extended amount of pages afforded an annual publication. It reveals previously undisclosed details about Lobo’s childhood, although there is the question of whether that backstory matters at all given that the continuity within the character’s comic books has never been strictly enforced by DC Comics’ editors.

Nonetheless, the title does make an effort to explain why Lobo needed Black Canary in the first place:

a. Lobo understood that the female vigilante is not above bending her moral code if it suits her goals (basically shorthand for “willing to kill,” which cannot be said for most of her teammates in the Justice League);

b. the villain turns out to be someone that Lobo himself considers so pathetic such as to not warrant killing with his own hands. Black Canary is Lobo’s catspaw; and

c. most importantly, Lobo gets his jollies from playing around with other people. Lobo enjoys the sport of manipulating the normally strong-willed, stubborn Black Canary into doing his dirty work, using her as bait, and was most likely planning on leaving her behind in case things did not go according to plan. It is a disturbing glimpse into Lobo’s character. But it is hardly surprising to any one familiar with the character. No appearance of Lobo has ever portrayed the bounty hunter as anything other than, at best, a self-serving antihero.

People looking for humor will find it in this comic, and those who dislike the over-the-top gags in Marvel Comics’ Deadpool comic will appreciate that Justice League America Annual’s comedic content is fairly subdued in comparison, with nary a fourth-wall breaking gag in sight (stock-in-trade for a Deadpool story). Instead, this story relies mostly on in-character snarky behavior and the contrast between the two main characters’ respective personalities.

A reader will hardly find anything innovative when it comes to storytelling in Justice League of America Annual 2017. But publications touted as “annuals” are generally light-hearted given their release around Christmas. We have often thought that DC Comics’ annuals serve as standalone stories meant to be enjoyed on their own, to tide readers over until the next year. Within this context, the comic achieves its goal.