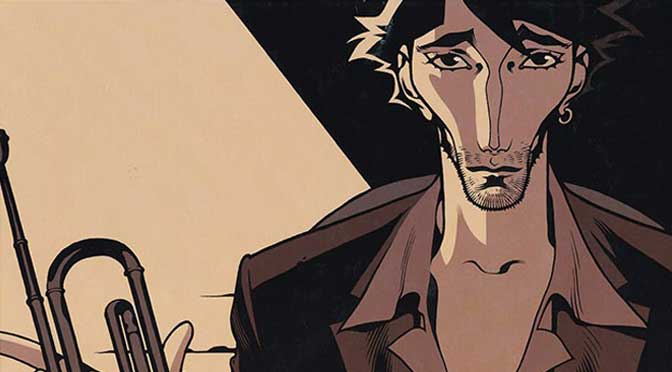 Like the character it’s named after, creators Raule and Roger’s Jazz Maynard has been around the block. First published in 2015 under the French publisher Dargaud, the series was then translated into English under Europe Comics, an alliance of publishers dedicated to making European works more internationally available.

As the series has made its way to the United States, American publisher Lion Forge Comics has offered its own English translation under the Magnetic Collection. This is a new imprint consequent upon Lion Forge’s acquisition of publisher Magnetic Press in October 2016. Jazz Maynard is the first single issue to be released under this collection. Its translated editing and layout was overseen by former Magnetic Press President and Publisher Mike Kennedy.

The title’s winding, international journey mirrors that of its globe-trotting protagonist. The series opens with the impeccably-named Jazz Maynard returning to his native Barcelona and El Raval, the neighborhood he grew up in. It is his first time back in ten years, time he has spent as a jazz trumpeter in New York City. During his absence, little has changed in El Raval: the old bars have new signs and a new boss controls the district. But the same trouble Jazz tried to leave behind is there waiting for him.

Jazz hardly has time to secure a new job as a musician in a local club and reunite with his childhood friend Teo before both are abducted and tied to chairs, awaiting interrogation by local criminals. The issue begins at this point, with the bulk of the plot unfolding as flashbacks while the two try to figure out why they have been taken. Along the way, Jazz reveals the reason for his return to Barcelona: news that his older sister, Laura, has been taken by a sex trafficking ring. Jazz assumes that his and Teo’s capture is retaliation for her rescue and Jazz’s violent assault against her captors in New York three days earlier.

If the plot of Jazz Maynard is effective, its arrangement is where the music really picks up. The issue’s placement of flashbacks and interludes push the issue forward, from recaps of Jazz’s time in New York to flashforwards that preview Jazz and Laura confronting the man who sold her out. The issue treats each segment as a staccato, and the short scenes never overstay their welcome before moving to a new location or point in time.

Along with these transitions, Mr Raule has an eye for the world these characters occupy. The neighborhood of El Raval is a place with identity, where characters might not necessarily know one another, but they all know what the score is. A piece of graffiti seen early in the issue, translated on the page for English-reading audiences, conveys this sense of identity: “We’ll believe in the crisis when the rich commit mass suicide.”

The saying is an expression of a collectively wry cynicism, a sense that life at the bottom is immune to getting any worse. This attitude runs through the series. Even in their abduction, Jazz and Teo express a nonchalance about any danger their situation may pose. As a gun is loaded next to him, Jazz asks about his former love and stays adamant he’ll only be in El Raval for a few months, at most. The effect of this attitude is a profound sense of cool, a sense so effortlessly ingrained in the issue that it never comes across as put-on or manufactured.

The world that lives within El Raval is further realized by Mr Roger’s art. For many, the artist’s considerable strengths will stand out most clearly in the issue’s scenes of violence, bursting segments that are stylishly detailed and choreographed. Yet the author’s most profound strengths can be seen on an earlier page as Jazz walks through the city and encounters the “Mass Suicide” graffiti. Wordlessly, the page communicates the ambivalence of homecoming while making Jazz a figure at home in this place. As in other spots, Mr Roger makes the most of Jazz’s character design, unique amongst the rest of the comic’s cast. Standing out as almost cat-like in the face and eyes, his eyes register from an aloof vulnerability to a sinister cunning, often in rapid succession.

In bringing this writing and art to a new readership, the revised translation by Magnetic Collection thankfully keeps the spirit of the series intact. Very little is altered from the Europe Comics translations into English, with the most significant changes being in the layout. Helpfully, Magnetic Collection places translated notes more strategically on the page, as well as color codes Jazz’s and Teo’s respective narration in a few spots. The absence of these signposts were by no means detriments to the Europe Comics edition, but stand out as worthwhile changes to this translation.

The dialogue and writing in this edition differs very little from the previous translation, and is blessedly free of attempts to localize or alter the language by inserting out of place slang or colloquialisms. A few attempts to smooth out the translation are largely successful, such as a scene where Jazz asks an El Raval local to watch his trumpet. Other alterations push lines closer toward cliche. As Jazz prepares to play the trumpet, the original line, “A tribute for you, ma’am”, has been altered to the more conventional “This one’s for the lady.” Minor nitpicks like these are the only criticisms to make of the translation, which keeps the series intact.