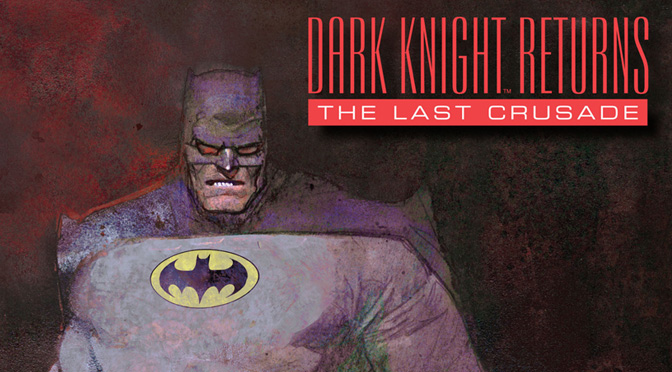 In February of 2016, American publisher DC Comics published “Dark Knight Returns III: The Master Race”, which is the third part of Frank Miller’s iconic The Dark Knight Returns franchise. This series of titles portray a future version of the character Batman, in his twilight, weakened by old age, aware of his own mortality, yet unable to turn a blind eye as his world descends into chaos.

“The Dark Knight Returns III: The Master Race” (2016) did not fare well in the hands of critics and reviewers (see our unfavourable review of the first issue of the title here). But this malcontent did not deter DC Comics from adding yet another spin-off title to the franchise, entitled “The Dark Knight Returns: The Last Crusade”.

Unlike “The Master Race”, “The Last Crusade” is a prequel. The title follows Batman and his alter ego, Bruce Wayne, years before he became the overly cynical, angry Batman in the pages of “The Dark Knight Returns” (1986). Here, we see him only starting to come to grips with his age – struggling with a body that can no longer keep up with the rigors of being the Batman, and the realization that he needs to start preparing a successor.

The Batman’s final antagonist in “The Dark Knight Returns”, the superpowered alien Superman, is notably absent from “The Last Crusade”. This works to keep the story grounded. The focus on this story is Bruce and his protégé, the second Robin – Jason Todd.

It is worth noting that Jason Todd died at the hands of Batman’s nemesis The Joker in the story arc “A Death in the Family,” which was published in December of 1988 to January 1989 in issues #426 to 429 of “Batman”. Much of the editorial inspiration at DC Comics for the death of the character was the excited reader reaction in 1986 to the passing references (including the uniform of Robin encased in a glass cylindrical memorial) in the “The Dark Knight Returns” as the reason Bruce Wayne retired from crimefighting.

“The Last Crusade” tells the story of the final days before Jason Todd was abducted by Batman’s arch-enemy, the Joker. Batman and Robin hunt the villains Killer Croc and Poison Ivy, both of whom are running a racket that involves seducing and manipulating wealthy businessmen. This is a feat that is made possible due to Poison Ivy’s ability to emit pheromones that make weak-willed men susceptible to mind control.

Peripheral to this is the Joker, who has been captured prior to the events of the comic and interred in an insane asylum. Inside the asylum, the Joker takes advantage of the mentally unstable inmates, using mind games to work the asylum’s residents into a violent frenzy and then directing them towards the asylum’s guards and orderlies. He escapes in the middle of the chaos.

The comic excels at addressing criticisms lobbed against the Batman character. These include such employment of minors in a paramilitary operations that would be extremely risky even for a highly trained adult (the “child army” referred to cynically in the recent “Batman and Robin Eternal” #1 (2015)), and his lack of any extraordinary powers, an almost unique exception amidst the character’s primary peers within DC Comics’ portfolio.

The story demonstrates that these are actual problems that the character has to deal with and in some cases put him in grave danger. Nowhere is this more apparent than in the fight against Killer Croc, a man with a rare genetic mutation that gives him a hulking crocodilian appearance along with the temperament and the savage strength of a beast. In the fight, the Batman is overpowered and was unable to outsmart his opponent due to being distracted and cornered. The implication is clear in the story that the Batman would have died were it not for Robin’s clever use of lights to trick Killer Croc into thinking that he is surrounded by the police.

“The Last Crusade” also delves into the relationship dynamics between Bruce Wayne and his protégés. The story implies that the character has never really found a true successor, not because none of his companions was actually capable, but because Batman has never trusted anyone. At several points in the story the Batman admits to himself in an internal monologue that Jason Todd is a better fighter and strategist than Batman was when he first started. But Batman nonetheless worries that the boy might not pass muster.

In this story, it is Batman’s refusal to acknowledge the progress of his protégé that becomes Jason Todd’s undoing. It leads to the young man doing unnecessarily dangerous things on his own as a way of seeking the Batman’s approval. This ultimately includes a solo expedition to locate the recently escaped Joker, which results in the capture of Jason Todd by the madman.

“The Dark Knight Returns: The Last Crusade” is a great addition to the franchise. In many ways it is the only story derived from the 1986 title that actually feels consistent with the tone of that original story. The characters feel like they would eventually turn into their versions in the 1986 original. It takes advantage of the contextual gaps which so intrigued readers in 1986. If readers wanted to spend more time in the decaying, urbanised future built by “The Dark Knight Returns” but were disappointed with “The Dark Knight Strikes Again” (2001-2002) and “The Master Race”’s descent into self-indulgent Kryptonian-centric plots, “The Last Crusade” should be a welcome and entertaining read.