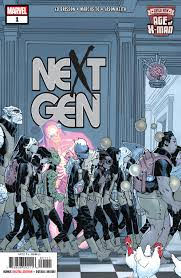 This story is concerned with a parallel universe of Marvel Comics’ mainstream reality: one which is a utopia for mutant superheroes. The mutants, NeXtGen, are fairly typical teenagers, squabbling amongst themselves, teasing each other, and picking on the kids who would prefer their own company.

The major issue with this title is for the new reader. Marvel Comics’ X-Men continuity is a garden overflowing with thorny weeds. Because Marvel Comics does not engage in the periodic pruning which it’s major rival, DC Comics, deploys every few years with a continuity reboot, the X-Men series of titles in particular are entirely impenetrable to the casual reader.

What is happening in this issue? Some mutants are in a school being taught agriculture, defence, civic contribution, and medicine. We are supposed to know these characters by name, and understand the strangeness of their appearances, how Colossus missing an arm or Wolverine’s death is a wondrous variation on a theme.

But the X-Men have been depicted over the years in so many “what if?” iterations that the novelty of this approach to storytelling has long passed. We have seen the Days of Future Past parallel future: the Age of Apocalypse parallel present: a convoluted present where X-Men from the past are brought forward to the present to fight the sons of Mystique who have come back in time from the future. The weeds are tangled into a knot which renders the entire X-Men storyline, and this issue in particular, a delight to those who have read every issue and know every X-detail. As a new reader, however, this title will confound, baffle, and loop itself into a meaningless nonsense.

Because Marvel Comics cannot help itself, almost all of the other titles released under this exploration of the mutant utopia, called “Age of X-Man”, overuse the letter “X”: we are told to complete the story by buying X-Tremists #1, Prisoner X #1, The Marvelous X-Men #1, and Apocalypse and the X-Tracts #1. An article on branding and the letter “X” notes, “Because the least number of words in the English alphabet begin with X, this adds to its uniqueness and cachet. It also adds to X’s power. Less becomes more because it carries more weight…. The versatility of “X” makes it interesting, mysterious, fascinating, and universal as a symbol that can be used very effectively in branding of companies, products, and ideas. This versatility contrasts with its uniqueness to give X a lot of power that brand marketers can use to their advantage.” Marvel Comics milk this for every drop, no doubt to the slavish delight of their core base of readers.