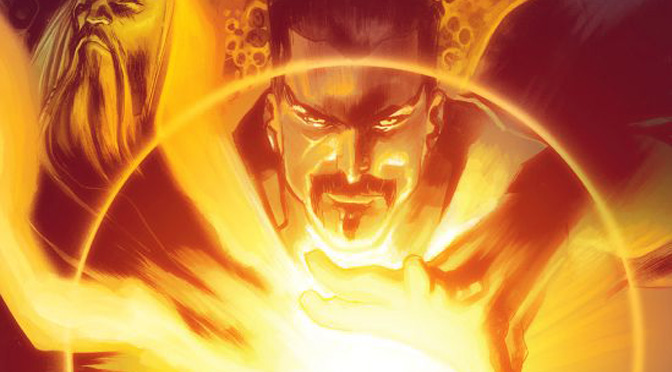 American publisher Marvel Comics very understandably wishes to capitalise upon the buzz around the latest Marvel Studios’ motion picture, “Dr Strange”. We have previously reviewed two “Dr Strange” titles: one very positive review of the accomplished writer Jason Aaron, and one which identified the comics as the corporeal equivalent of clickbait. Regrettably, this title falls into the latter camp.

In this new series, writer Robbie Thompson has the titular character, Stephen Strange, a powerful wizard living in modern day New York, struggle with the loss of most of his magical powers arising from events described in other recent comics and which we need not go into here. In an alley in Manhattan Dr Strange fights off a tentacled demon seeking to take advantage of the depleted magical champions of the earthly plane, and the wizard is not faring well against his adversary. Literally out of nowhere Dr Strange is assisted by the legendary medieval wizard Merlin. Merlin is recruiting from both the distant past and the far future, seeking out other Sorcerors Supreme to help fight a terrible and powerful threat called The Forgottwn (as it turns out, an uninspiring slug-like demon with straight red hair and the mouth of a petulant teenage high school student, but that is neither here nor there).

The title “Sorcerer Supreme” is held by the most powerful wizard on Earth, and so assembling a number of these wizards involves time travel. The double-paged spread of Strange’s and Merlin’s walk back in time, wandering through and around manifestations of themselves at different ages and even states of decomposition, is the most intriguing element of this comic.

Unfortunately the balance of the comic is entirely forgettable. The assembled Sorcerers Supreme (which includes a cranky Sir Isaac Newton, Stephen Strange’s successor, a hooded wizard called Wiccan, and a very youthful version of Dr Strange’s teacher, The Ancient One) all seem to irritate each other so as to artificially create tension in the plot. Mr Thompson is figuratively waving around a cardboard sign with big block letters written in crayon: “How will they defeat their enemy if they cannot master themselves?” It is cliched and dull, and further, not the sort of snarky behaviour to be expected from beings who are equally spiritually enlightened.

Comic book publishers who seek to ride upon the coat-tails of related movies should be endeavouring to hook new readers with quality content, so those new readers will return and buy the storyline in totem. It is a scorched earth strategy to instead seek only to make a quick profit from the curious through substandard writing. Those new readers will not return.