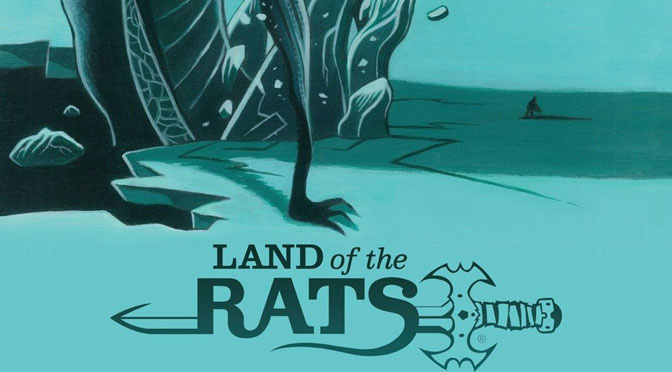 In 1851 American writer Herman Melville wrote “Moby Dick”. Ostensibly a tale about the perils of whaling in pre-industrialised America, “Moby Dick” was one of the first novels which:

a. focussed upon “will to power”, in a Nietzschean sense, but thirty years before Friedrich Nietzsche wrote his texts beginning with “Thus Spake Zarathustra” (1883). The fundamental concept is that a person through sheer force of will can overcome any adversity;

b. anger with fate, as a fuel to that will to succeed. Many writers and philosophers have for centuries noted that the fates are cruel. In “Moby Dick”, Captain Ahab rages against God, embodied by the white whale, and drew strength from his fury.

In this fantasy work, entitled “Land of the Rats – Gastrolithicus”, a combination of narrative text and free-flowing art, the unnamed protagonist, wandering a strange and icy land, is subjected to various twists and turns of fate- enslavement, escape and recapture, being eaten by a giant monster, a fight to the death, and the decimation of his liberated comrades. The grim tale is punctuated by amusing monologue – reference to “ass-kicking” and the rise and fall of “stones” depending upon the protagonist’s mental state will draw a wry smile. Any additional humour, given the dire predicaments faced by the protagonist, would potentially have taken the fantasy across the line into farce along the lines of Voltaire’s “Candide”. But the humour is dry, such as it is, and is applied by Mark Nasso, writer and artist of this work, with minimal application.

The most compelling elements of the story are that:

a. first, the character from time to time gives up hope of survival but then finds an inner core of fire which propels him through the adversity. “But I would not yield,” he notes, lost on a glacier. Swallowed by an ice beast, he is on the edge of surrender to death when “I was distracted from the pain by an intense flare of heat from within”, his raging refusal to die his salvation. The man finds a sword, noting, “But if I had remained idle, I would never have found it.” In its own way, the story is grimly inspiring;

b. the combination of fantasy and realism. The horrible monster, Gastrolithicus, “a giant wall of death that could swallow a whole army”, which haunts the protagonist (much like the great white whale in “Moby Dick”) and also the other characters, is a reeking nightmare from the depths of Lovecraftian fantasy. But the attention paid by Mr Nasso to minutiae such as the hierarchy amongst slaves, the unexpected but rational, hidden desire for revenge as a consequence of being meted a punishment, the welcoming old man who is actually a hunter recapturing slaves, the sudden apprehension of not showing fear to followers because of the consequences of that, are all rational, well-considered and engaging.

Eventually the protagonist returns to the border of his tropical home. “A warm breeze touched my burnt and charred face.” But could he possibly be the same man after his experiences?

Finally, some of the text is poetry and a delight to read:

“They clothed me in strange garb which reeked of the slave who had died in it before me. But I still trembled as the southern wind numbed my hands and feet.”

And in the opening pages:

“Darkness… then a blinding light… I felt the chains come off me… the colours were sublime. The rays pierced my numb lens… as if I had forgotten how to see… or perhaps I had never seen before.”

“Land of the Rats – Gastrolithicus” is an independent publication out of Houston in the United States. It is innovative and compelling, epic and oddly timeless.

Tags: Indie, Land of the Rats Gastrolithicus, The Underground Forest