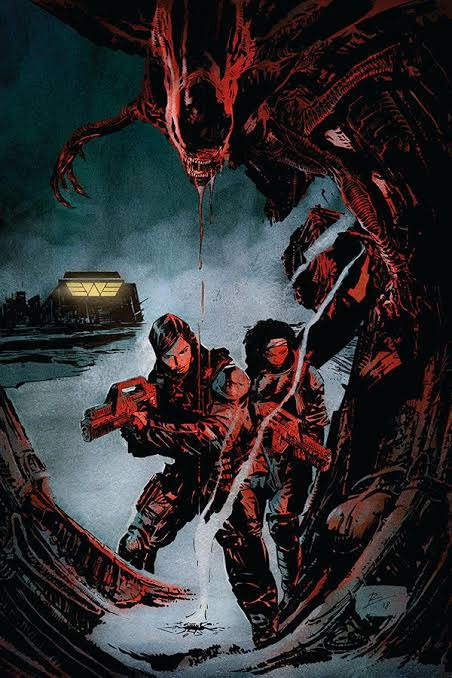 This title builds upon the stories of previous titles: Alien: Isolation, and Aliens: Defiance. We have previously reviewed the second of those titles back in 2016.

Writer Brian Wood has his two heroes from both stories, Amanda Ripley and Zula Hendricks, join forces. Hendricks and Ripley have been traumatised by their previous interactions with the alien xenomorphs – monsters which incubate within live human hosts and kill without hesitation. Hendricks and Ripley decide to shut down the bio-weapons program of the sinister corporation Weyland-Yutani, which is intent on using the xenomorphs to create new weapons.

Some of the outcomes of those experiments are on display in this title. Ripley sneaks about a colony ship and is apprehended by aggressive “synthetics” – androids which are manufactured by Weyland-Yutani. When Hendricks fires a missile into the ship and manages to destroy two of the three synthetics, a third one shoots Ripley in the shoulder. The wound is only a graze, but the bullet is tipped with the blood of a xenomorph. This blood, as demonstrated in the various Alien motion pictures, has special properties. The blood is in essence a molecular acid which can chew through steel. Ripley, it seems, was lucky not to at least lose an arm, or even be eaten from the inside out by the acid.

Mr Wood in this issue concentrates on the ruthlessness of Weyland-Yutani rather than the horror of the aliens. The company’s colony ships depart twice a day, entirely unregulated “death traps”, carrying the desperate to far away worlds. Hendricks and Ripley, aided by what is left of Hendricks’ friendly synthetic Davis, track down the Weyland-Yutani research station. But they also find a colony ship called the Gaspar, filled with 1100 passengers. Weyland-Yutani has changed its records of the colony ship’s inventory, and reclassified the spacecraft as a “re-supply ship”. This suggests that the 1100 colonists aboard have been, in essence, “disappeared.” Given the breeding mechanism of the xenomorphs, it appears that Weyland-Yutani intend upon going into mass production using the colonists as unwitting hosts.