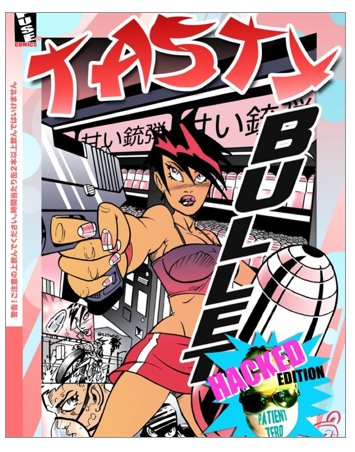 IT COMES DOWN NOT TO WHO’S BIGGER, but who is more determined and more virtuous, the side one wants to win, or some ones for the many ones, like the intelligentsia class that was once supposed to save the world’s benighted peasants with revolutionary modern wisdom, but the peasants got radiation instead of radiance, and trust in established conventions dissolved, call them rational or faith-based or whatever new age moniker is supposed to be the fad for fangling the future. Now, no authority rules, and so predators prevail, east and west.

“Consumers will dictate their own fate,” the TASTY BULLET monster declaims at one point, and sounds thoroughly convincing, reflecting the modern free-market philosophy spread like dung everywhere one walks these days, inescapably. If only we could smell the carbon monoxide in the atmosphere from car exhaust right there on the streets with our kids, and deadly low-level radiation and toxins permeating ever more widely the soil, the air, and the seas, as well as we could smell in earlier ages the horse manure in the streets or our own shit before indoor plumbing, not so long ago, perhaps we would then find the resolve to clean up and truly modernize, and stop living like a pestilence on the earth.

“Consume this!” retorts Tasty Girl, swinging in at just the right moment, ready to sock and roll.

Marketing poison for the thrill it gives is a consummate evil, portrayed in abundant variations in modern dramas, and now in Tasty Bullet, straight from the potent glands of international Portland artist Arnold Pander, portraying a semi-fictional energy drink from Asia with highly addictive and deleterious adrenaline affects something like a needle fixation with speedballs that you can now drink instead, offering convenient administration, attractive packaging, and a guaranteed high. No one is stopping you. Buy a case or two right now. Amped up Tasty Girl peddles the brand to adoring millions with death-defying feats and thrilling poses. Then she has a change of heart.

The digest-size book has 175 black-and-white pages so animated you never miss the color, filled with gorgeous action in trademark Pander style known in earlier productions by the Pander Bros. team, with duo Jacob and Arnold Pander, yet transformed and dynamited into an inspired makeover of Japanese manga and cutesy-pie marketing that bafflingly dominates Japanese popular culture. This booklet was published in 2009, and may only be available online, and at Future Dreams books, where Arnold brought a small stack along with other rare Pander comics.

The Tasty Bullet story was amplified by Jonathan Vankin, and the collaboration worked, making a real drama that satisfies, not like a cardboard prop for the art. Scripting by Arnold Pander kept it totally on cue to the newest hippest beat, which always amazed me in all the Pander Bros. productions, and especially now the pair are somewhere way past age 30. Afterward, I keep pondering Tasty Girl’s fate, the fate she chose, finally leaving what she found deplorable behind, and deploying new values; and wonder myself what cherished values are truly at the end of the tether, when I might feel compelled to decide whether to turn to the pressure of the collar, or bite through.